Planet of the Apes: "The Tyrant"

In “The Tyrant,” the fugitives -- Galen (Roddy McDowall), Virdon (Ron Harper) and Burke (James Naughton) -- attempt to entrap a ruthless, corrupt gorilla named Aboro (Percy Rodrigues), who has been promoted to prefect of a local village. He has taken over from Galen’s cousin, Augustus.
In an effort to correct matters, Galen pretends to be an underling of Dr. Zaius named Octavio, and offers Aboro a new position: as a replacement for General Urko (Mark Lenard).
This plan requires, however, Aboro to assassinate Urko, a step he is ultimately willing to take.
For the fugitives, the plan is less simple. They must convince the human-hating Urko to go along too, to prove Aboro’s corruption. But Urko cannot trust humans, or an ape who “chose to live with humans.” 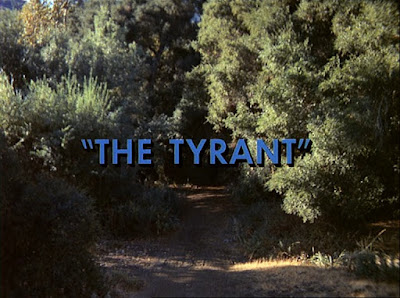 “The Tyrant” may just be my least favorite episode, so far, of the short-lived Planet of the Apes (1974) TV series.
In short, the episode is another pot-boiler, with no real social commentary or depth. Instead, this episode is plainly “Mission: Impossible on the Planet of the Apes,” as our trio of heroic fugitives successfully bring down a corrupt ape. They resort to subterfuge and trickery to do it, waging a kind of psychological warfare campaign against Aboro.
Galen is the Rollin Hand character of this team, adopting the disguise (accent, and gait) of Octavius, a hench-ape to Doctor Zaius.
I understand the necessity of giving Roddy McDowall, the top-billed actor on the series, something of substance to do each week, but having his ape become a master of disguise is a risible solution. Galen works best, perhaps, as a guide to ape culture, and a curious “outsider” to human culture. But more and more, the series uses him as a wily trickster, fooling other apes into believing his disguise/fake identity of the week.
It is difficult to deny that episodes such as “The Tyrant” abandon all pretense that Planet of the Apes (1974) is a science fiction series, contending with legitimate science fiction issues. There is no real discussion of ape society in this episode, or even of human society, for that matter. Nor is there is “mythology” present to refer back to, regarding the astronauts’ plight. There aren’t even any futuristic futuristic touches, either.  On that last front, there was clearly a model from the feature films to work with: the subterranean human mutants.
Instead, “The Tyrant” is simply an espionage, M:I story with talking apes.
That’s a disappointment, especially since the series’ best episodes -- “The Legacy,” “The Deception,” and “The Trap” -- for instance are strong in terms of commentary and character development, at least.  Here, the character decisions are baffling, in a way. If planned out more cleverly, Galen, Virdon and Burke might have rid themselves of both Aboro and Urko in one stroke, instead of merely removing the former. But since this is a 1970’s series in which the status quo must always be rigorously maintained, that eventuality does not occur. 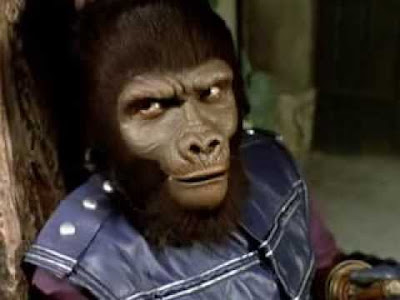 I suppose what I am complaining about here is that little thought seems to have gone into what kind of series this should, or could be. I suppose one might argue that Aboro is a symbol for the Watergate Scandal in the real world, but even that comparison seems incomplete, or facile.
Indeed, the most intriguing aspects of the episode actually make one sympathize a little with Aboro’s situation. Galen’s cousin, Augustus, is aghast that a gorilla has risen to the position of prefect, since “our kind” (meaning chimpanzees) “always fill administrative positions.” 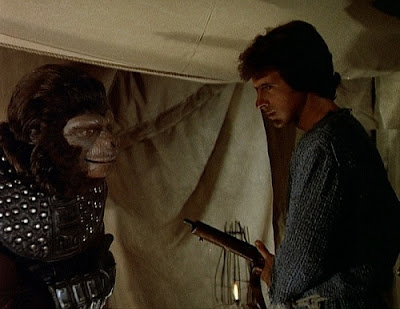 In other words, there seems to be a class stratification in ape society. Aboro rises to a role gorillas don’t frequently hold. Sure he’s a despot, but still, he’s taken advantage of his skills and his opportunities.  But then Galen and the others take him down, reinforcing the belief that gorillas can’t be trusted to hold administrative positions. In this case, the series establishes a prejudice in ape culture, and then confirms that prejudice: gorillas can’t be trusted to hold positions of power.
Surely, however, Urko is in an administrative position, right? (And he's definitely a gorilla).
at February 25, 2021