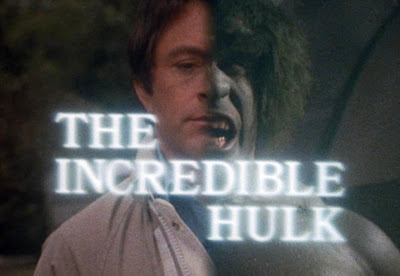 As late as 1978, superhero television was still attempting to escape the gravitational pull of the campy but highly-entertaining 1960s Batman series starring Adam West and Burt Ward.

That watershed ABC series, undeniably a prime example of colorful, counter-culture pop art, had so shaded the format requirements for superhero and comic book TV initiatives that a new template -- sans "BAM!" "POW!" and "WHAM" -- was required.

Resourceful and literate, writer/producer Kenneth Johnson crafted that new template when adapting Marvel's The Incredible Hulk comic-book for television. Instead of depending on dynamic super criminals, tongue-in-cheek dialogue, and out-of-this-world swashbuckling, Johnson grounded his new hero, David Bruce Banner (Bill Bixby), in a more familiar, less over-the-top world.
As author Gary Gerani observed in TV Episode Guides Volume 2 (1982, page 64), "he [Johnson] turned to a more intelligent and dramatic approach of a man whose life is upset by the fact that he can become this uncontrollable monster."

Series producer Nick Corea was even more specific about the program's approach: "Any writer who comes in with clones or extraterrestrials, we steer in another direction." (John Abbot, SFX #18, November 1996, page 76).

Today, we happily take costumed and colorful heroes at face value, as part and parcel of the triumphant, 21st century superhero genre. We want to see super villains and super feats. So the superhero stigma once associated with the camp 1960s Batman is finally gone. And in something of a turnaround, some viewers might actually gaze at TV's drama The Incredible Hulk -- which rigorously followed a format similar to The Fugitive -- as a bit of a relic; as a time capsule of a different era.

Think about it this way: we exist day-to-day by controlling our emotions; by keeping them firmly in check.

Yet in the person-hood of the raging Hulk (Lou Ferrigno), our impulses are free...unfettered. For David Banner -- living in the last days of disco -- the struggle was an internal one; to manage that provoked Id; to restrain the instinct-based beast inside all of us who wants to react to every challenge, fear, and pain with raw emotion and brute force. Hulk smash! 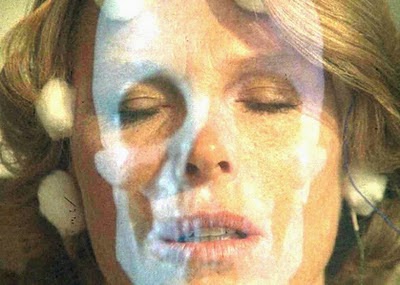 One of the best and most touching episodes of The Incredible Hulk remains the second season opener, "Married" (written and directed by Johnson). A two-hour tale, "Married" originally aired on November 22, 1978, and guest-starred Mariette Hartley as Dr. Caroline Fields.

Caroline is a brilliant psychologist facing her own internal struggle: a terminal disease (like Lou Gehrig's Disease) that has reduced her expected life span to just six weeks.

Our protagonist, David Banner, arrives at Caroline's medical practice in Hawaii to seek her assistance in controlling his "monster," unaware of her own debilitating condition. In particular, Caroline is an expert in hypnosis, and David believes that she could hypnotize his conscious mind into trapping the Hulk within. In other words, he hopes to cage the Hulk with his brain.

Over a few weeks, David and Caroline fall in love...and are married. David tries to cure Caroline's disease, and Caroline tries to cure David of his affliction. And impressively, much of the episode's "action" occurs inside the mind-states of these two individuals.


As David is hypnotized, we see him physically encounter the Hulk in a barren, desert landscape. First, David tries to restrain the Hulk in heavy ropes. But the Hulk breaks out.
Then David tries a cage with steel bars. Again, the Hulk breaks free.
Finally, David attempts trapping the Hulk inside the mental construct of an impenetrable vault. But even here, the beast within him cannot be contained. 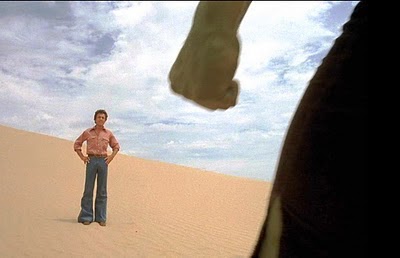 Meanwhile, Caroline attempts to use the mind-over-matter hypnosis technique to cure her defective "mitochondria" of the invading disease lesions.

She envisions her put-upon cells as an Old West wagon train; and the lesions there as invading Indian raiders surrounding it. When David formulates a new drug (taken from the Hulk's skin sample...) Caroline imagines the drug as the cavalry, coming over the hill. This is all weird and wonderful stuff, and it fits in perfectly with the 1970s obsession with hypnosis.

Today -- 36 years later -- "Married" has indeed dated somewhat. No doubt there. There are two worrisome scenes during which Bill Bixby and Mariette Hartley speak in atrocious Pidgeon English (talking about Chinese food...) and then perform bad John Wayne imitations. This is what seemed like witty and romantic banter in the 1970s, but today's it's just sort of cringe-inducing.

And also, "Married" evidences a big flaw common in many Incredible Hulk scenarios That flaw: the Hulk's presence isn't entirely warranted given the less-than-threatening circumstances.
For example, in "Married" two on-the-make "groovy" swingers wearing polyester pants two-sizes too small pick-up a drunk Caroline and take her back to their bachelor pad (along with a floozy...) for a night of casual sex. David arrives to take Caroline home, and then these two swingers suddenly become violent. They push David around. They pop a champagne cork in his face (!).

Then -- all kidding aside -- they violently hurl him from their second-story bedroom balcony...into a glass coffee table below, thus precipitating an appearance by the Hulk. The un-jolly green giant then proceeds to tear the bachelor pad to pieces. It's an impressive-enough action scene, but entirely unnecessary. Not to mention unmotivated.

Why would two relatively harmless guys with sex on the brain suddenly turn egregiously violent? (And destroy their own apartment in the process?) This sort of thing happened a lot on the CBS series: people who you wouldn't expect to immediately turn to violence suddenly become a HUGE threat so that the Hulk can appear and save the day.

But leaving aside these dated elements, "Married" remain an outstanding episode of the CBS series. Perhaps because of the two-hour running time, Caroline feels like a "real" person and not just the guest-star/love-interest-of-the-week. And the relationship she shares with David doesn't feel forced or silly. It's clear that Caroline and Bruce are both suffering terribly, and sharing what little time they have left together eases that pain. That's as good a reason for marriage as any, isn't it?

There's also one incredibly dark moment in "Married." With only two weeks to live, Caroline plays frisbee with a little boy (Meeno Peluce of Voyagers!) on the beach. The scene is much longer than it need be; and focuses a great deal on Hartley in close-shot. There's almost no dialogue. The scene is mostly silent.

But inscribed on her expression is the agony and regret of the life Caroline will never experience. She will never be a mother; never have children, as she once dreamed of. This is an issue "Married" raised early on, but then returns to with this unexpectedly sad and restrained moment. I can't deny "Married" is a tear-jerker, either, but then that was a perpetual quality of The Incredible Hulk too: it was, overall, a pretty melancholy show.

What I admire most about "Married," however, are those "dream state" sequences occurring in the desert of Banner's mind; as David and The Hulk face each other down. It may not seem like much of a comic-book-style adventure -- there's no Marvel-style mythology or continuity in place -- but the human drama is nonetheless fascinating. 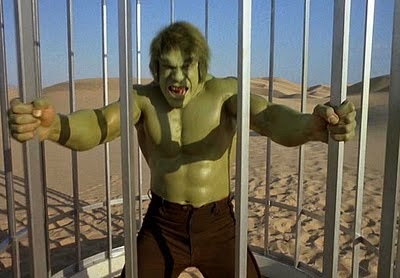 We don't like ourselves when we're bad tampered; when we let our "Hulks" out to roam.

The Incredible Hulk's impressive "Married" externalizes and literalizes the idea of the emotional battle raging within each of us, the battle for control with our barely concealed monsters.
at January 19, 2021