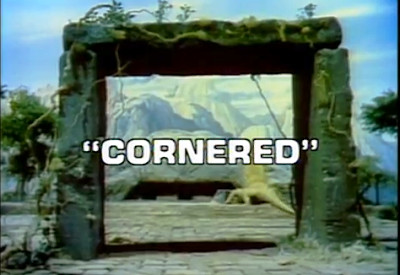 This week on Land of the Lost (1974 – 1977), the episode is titled “Cornered” and it involves a fire-breathing dinosaur, nicknamed Torchy. This Dimetrodon-like dino arrives in the Lost City and begins spraying flame into the Sleestak tunnels. Torchy also battles Big Alice, at least briefly. The mighty Allosaurus turns tail and leaves her territory in a hurry rather than confront the biological flame thrower. 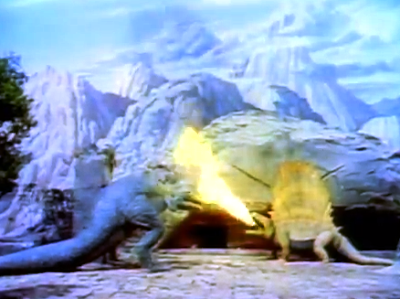 The Sleestak blame the Marshalls (again!) for the presence of Torchy in their valley and Enik (Walker Edmiston) demands that the humans eliminate the threat by nightfall. As leverage, Enik offers Uncle Jack (Ron Harper) the cure to a mysterious illness that has felled Will (Wesley Eure).
The young man was struck by Torchy’s poisonous tail and now risks falling into an eternal sleep. Enik promises that if Torchy is dispatched by sundown, he will give the Marshalls the cure.
With Holly (Kathy Coleman) and Chaka (Philip Paley) in tow, Uncle Jack attempts to lure Torchy out of the valley, using giant coal bricks as breadcrumbs.  The mission is successful, and Will heals on his own.
In other words, Enik was tricking them… 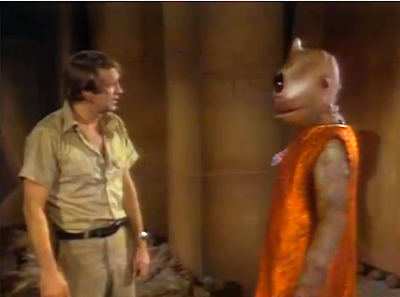 Although “Cornered” is perhaps not as downright, upfront awful as “Survival Kit” or “The Orb,” it’s pretty close.
Once more, the Sleestaks are out to destroy the Marshalls, despite a past history of cooperation. And once again, Enik lets himself be used as the Sleestak mouthpiece…as though he is just a slightly-less evil member of that race.
It’s actually grating to watch the scenes of the Sleestak Leader ordering Enik around because these scenes forget that Enik is an evolved Altrusian from another era, not a lapdog or lackey for the barbaric Sleestak.  Why Enik allows himself to be used this way is a mystery.
Once more, in “Cornered” we get a strange reference (from Uncle Jack) to Enik’s “famous logic,” an allusion not to the real Enik, but to the “Mr. Spock Enik” that this season has introduced.
Finally, just when you think “Cornered” can’t possibly get any worse, Will wakes up and sings a syrupy song while plucking the guitar. At this juncture, the series loses any sense of respectability and dignity, and emerges as ridiculous high-camp, going from fire-breathing dragons one minute to terrible musical-numbers the next.
Then, the episode just stops…mid-moment, as though in terminal embarrassment.  The final cut and lead-in to the end credits is jarring and sudden…but you can’t blame the editor for pulling out. 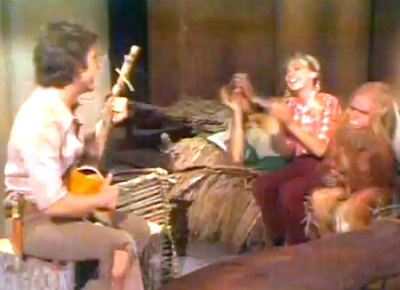 I don’t object in theory to the idea of a fire-breathing dinosaur in the Land of the Lost, but as usual, the third season writers seem to forget that the land boasts rules. Altrusia maintains a sense of balance, and it is also closed universe.  Given these facts, where did Torchy come from? Why hasn’t he been seen before?  I’d be perfectly happy to accept that the earthquake of “Aftershock” stirred him from a long subterranean slumber.  But no such explanation is provided.
at January 23, 2021