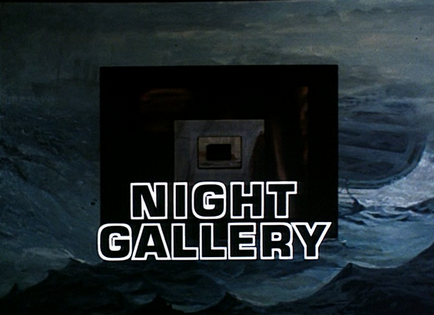 For three seasons in the early seventies, Rod Serling's Night Gallery brought horror stories of all varieties into American living rooms.
The series was hosted by its creator, who was seeking to repeat the success of his previous anthology, The Twilight Zone (1959 - 1964).  But unlike its celebrated predecessor, Night Gallery was filmed in color, and that technological advance opened up a whole new world of horror, a world splendidly taken advantage of in stories such as "Camera Obscura," which featured a sickly-green tint in some footage.
The premise of Night Gallery is that Rod Serling is our "curator" in a dreadful art museum or gallery, one where the paintings lead viewers into gruesome, twisted, and macabre stories.
As the series introductory montage for the first two seasons opens, these illustrations literally come towards the camera to the strains of Gil Melle's creepy theme song. The underlying feeling here is of a barrage of sorts, of unending waves hitting the shore, coming at us. And since the images are explicitly of terror or evil, we are overcome by that barrage.  They just keep coming, each image more hideous or weird than the last.
In the first shot below, an image within an image grows large, and comes at us. 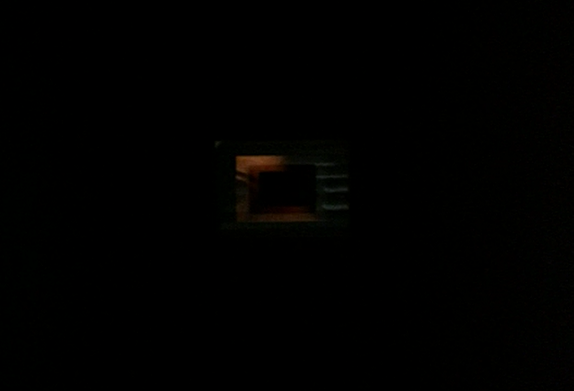 As the images fill the frame, we see different examples of art (meaning different styles of paintings) and different people too, but all of a monstrous variety.

In terms of the art-work, we first see an M.D. Escher-like work which seems to bend or alter our sense of reality.

In the constantly moving box-within-a-box frame or format, we also detect a human face, particularly its dark eyes. And inside the interior box is yet another painting, one of an abstract or modern type. 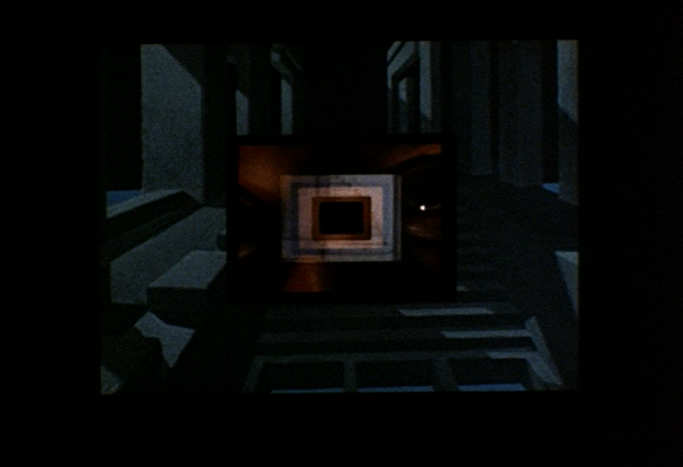 The images keep hitting us like a tidal-wave in the shots below, suggesting a sense of enveloping horror that we cannot escape. The idea of bringing up each image in its own box is an original one, and means that we don't get a traditionally edited montage, one in which we follow a chronological sequence, or move from location to location.  Instead, it feels like this montage is happening to us. 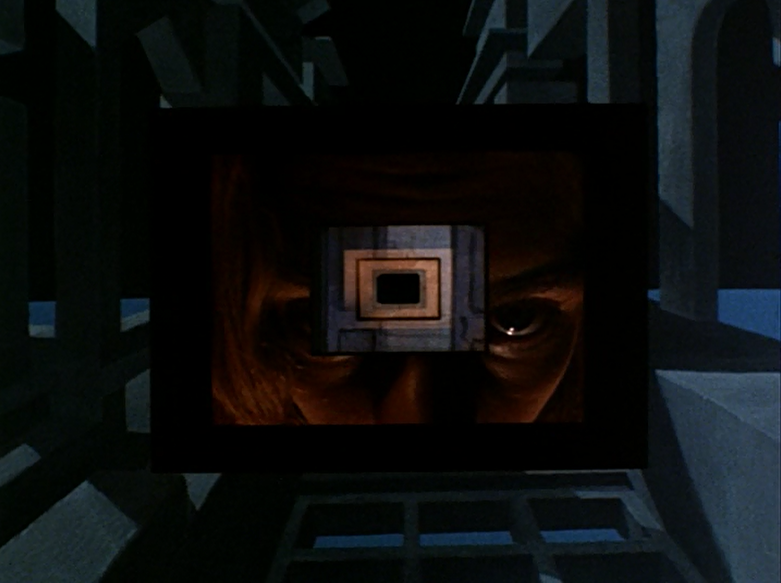 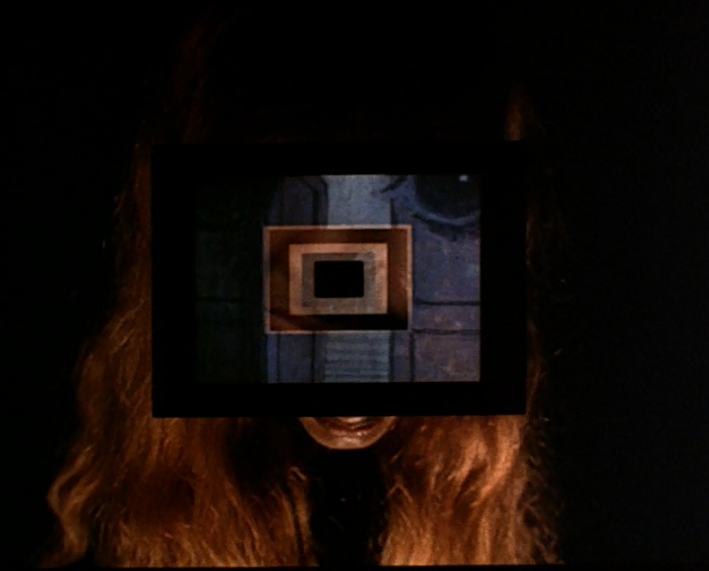 Notice that many of the faces we detect in this montage -- above and below -- are lit so as to be immensely creepy (from below), distorted through a mirror or other device.  This imagery also features people who are aged, old men, old crones and the like. 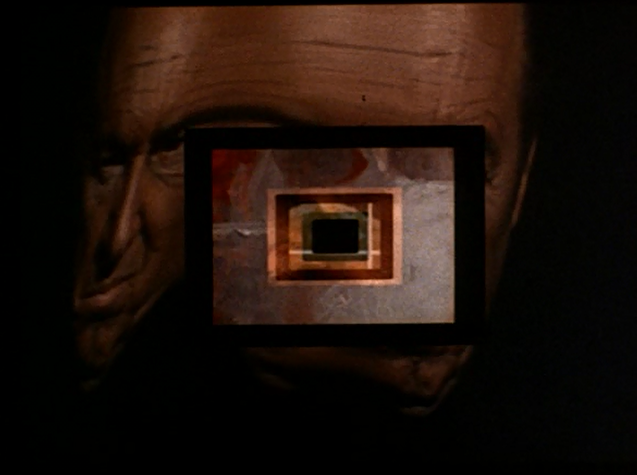 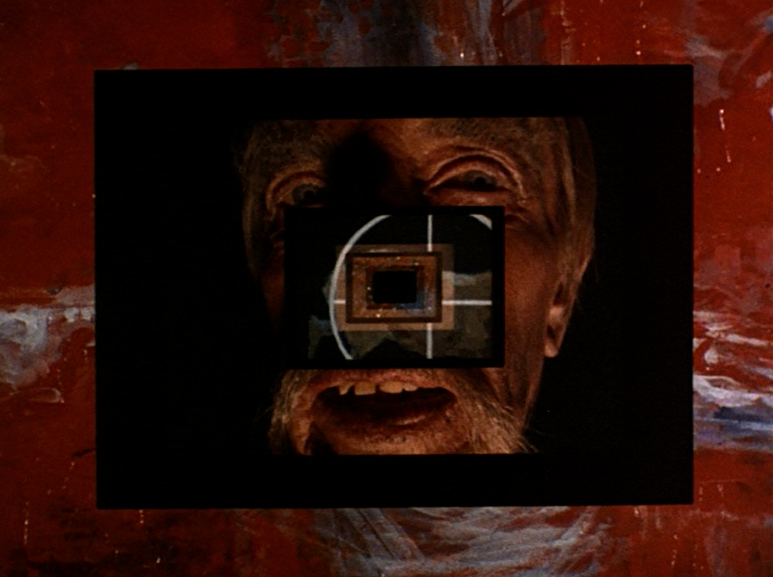 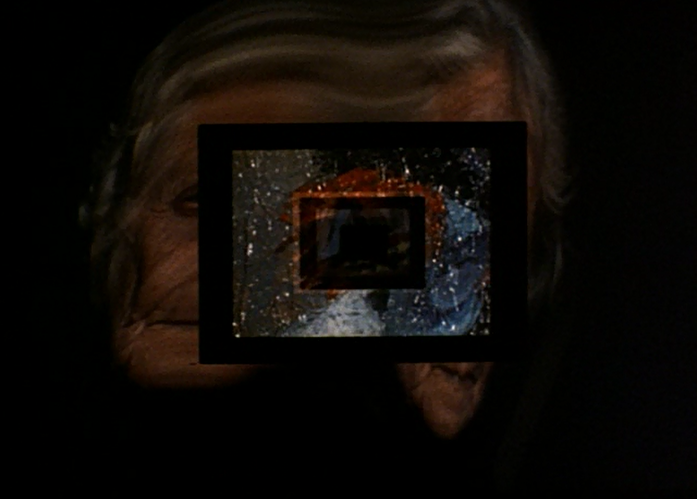 In the next shot, the object in front of the camera seems to be observing us, even as we look at him (and the other) images.  This visual seems to suggest that the terror is going to actually touch us, or affect us. 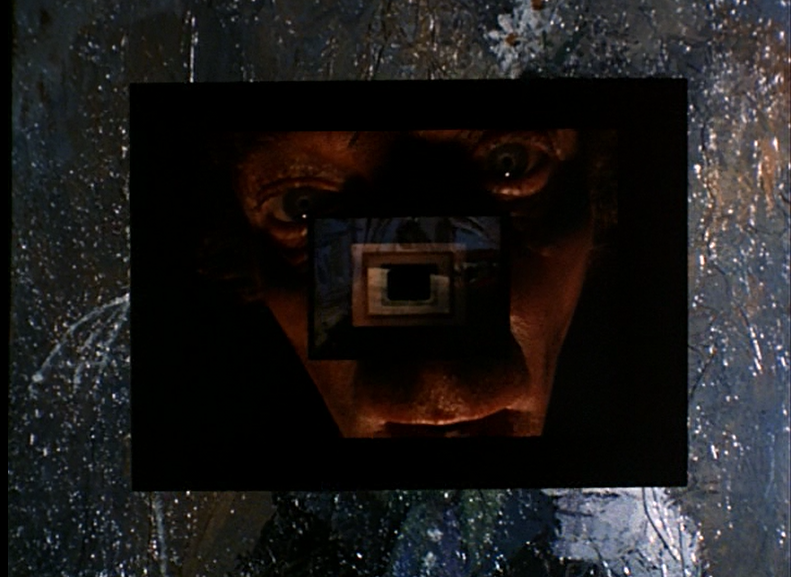 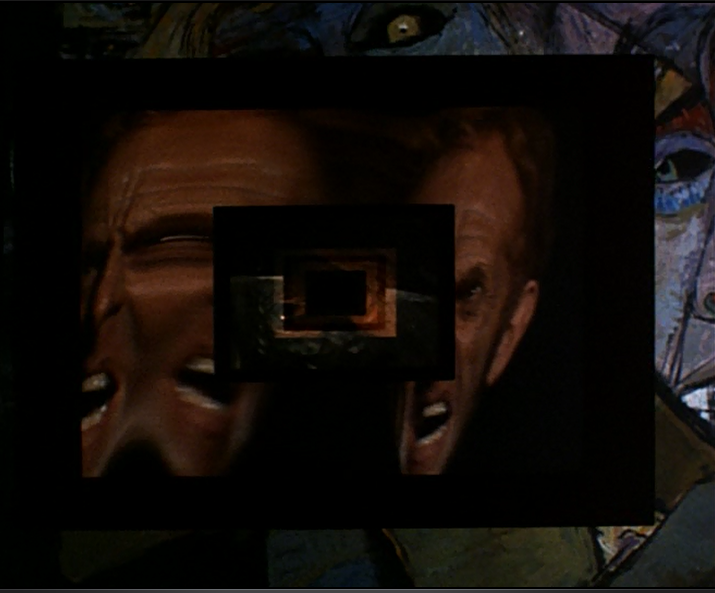 Next, our title cards, over more memorable and creepy art. 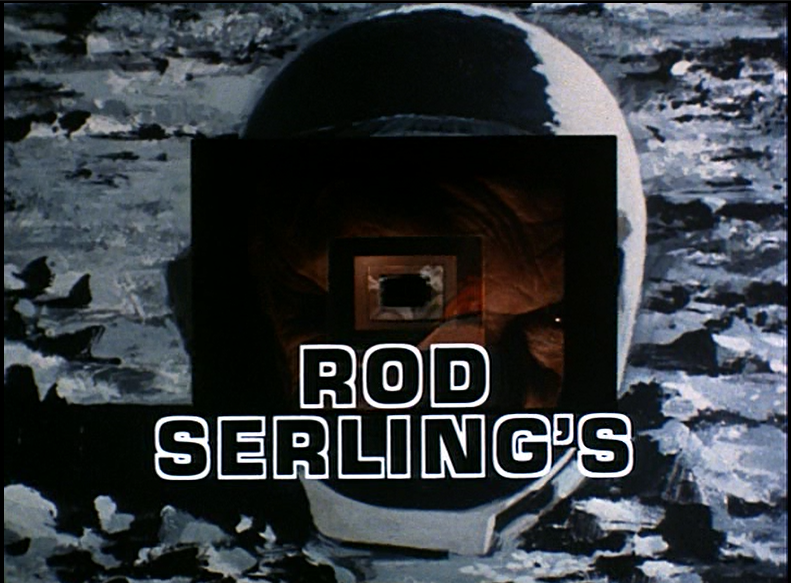 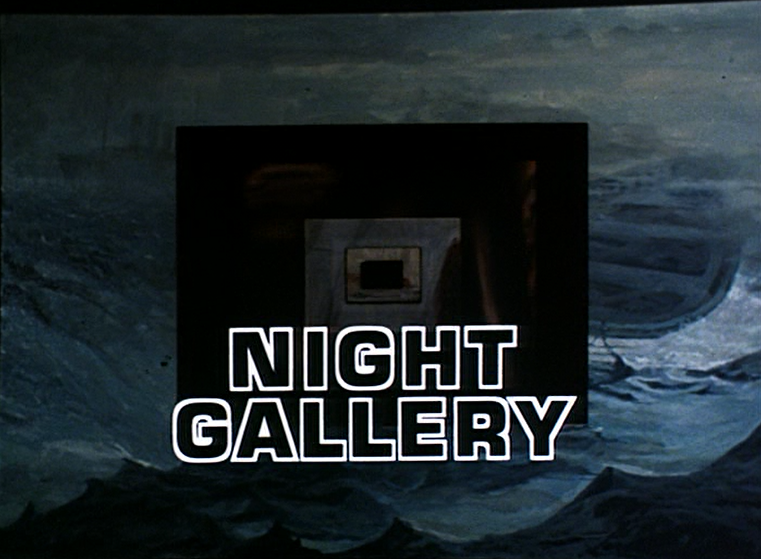 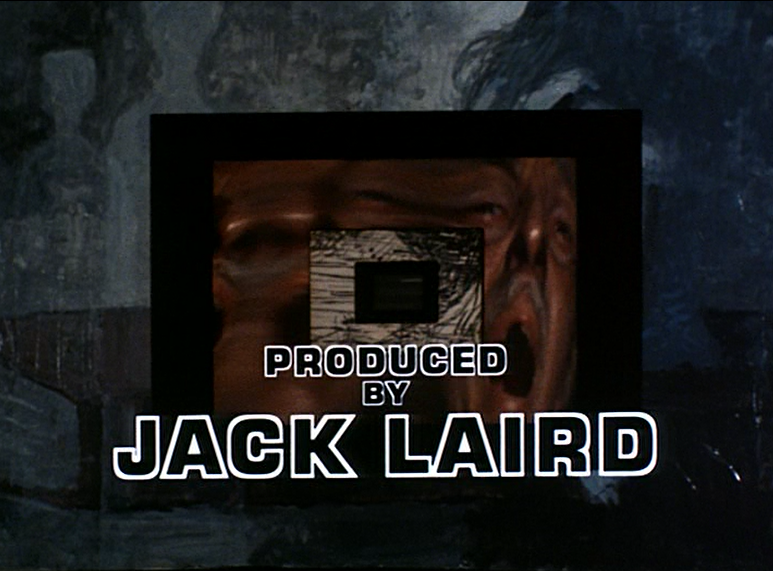 We finally resolve to a painting of a human eyeball, and in that lens meet our guest cast. 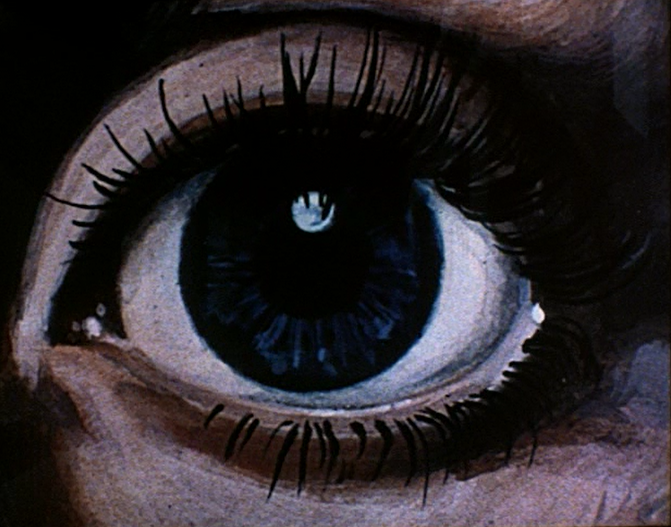 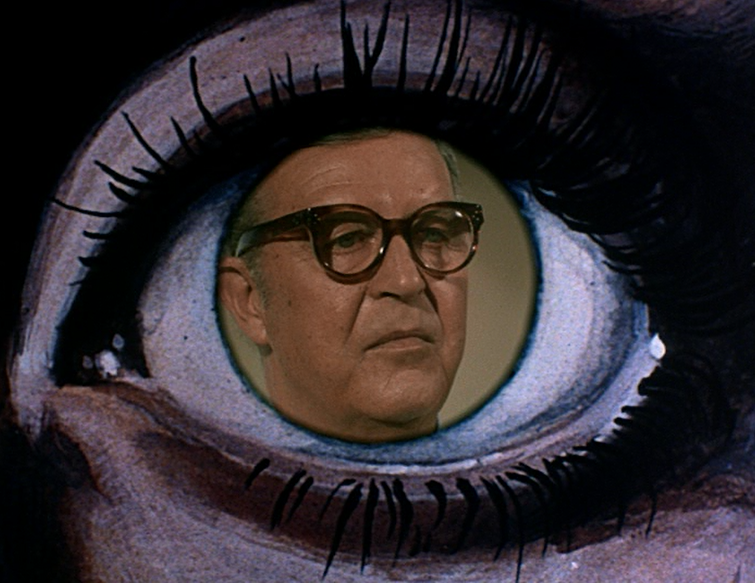 Here is the intro in live-action: