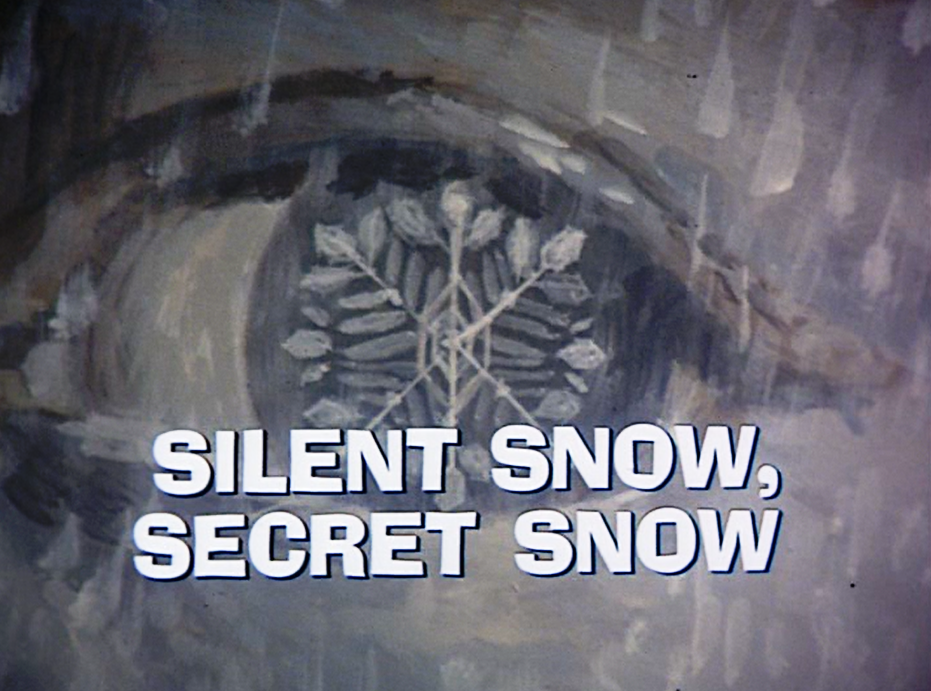 In 1934, writer Conrad Aiken penned a short story of a most unusual variety: one concerning a seemingly normal pre-adolescent boy named Paul who succumbs to a voice "inside" his head; the voice of immaculate, glittering, and unending...snow. The boy uses his mental "snow" as a barrier "between himself and the world."

Paul's concerned, frightened parents attempt desperately to reach their son, to pull the boy back to their reality, but the ubiquitous snow -- an all-consuming yet strangely intimate mental blizzard -- buries Paul's mind inside itself. This progression towards isolation continues until Paul is simply...unreachable.

"Silent Snow, Secret Snow" was dramatized on radio in the 1950s and also very memorably on Rod Serling's Night Gallery in 1971. It's one of my all-time favorite installments of Night Gallery, actually. It's very, very disturbing, but also beautiful.
One of the things I admire most about Night Gallery is that it dealt with horrors of all varieties, whether monstrous (like vampires and ghouls) or very real. On the latter front, it mused seriously about the horror of loneliness and regret ("They're Tearing Down Tim Riley's Bar").
Or, as is the case here, the horror of mental illness.

Whether you view this Night Gallery tale and young Paul's plight as a metaphor for autism or for schizophrenia, it's a terrifying journey.  "Silent Snow, Secret Snow" taps into a universal parental fear of losing your grip on your child; of losing him (or her) to something insidious that you can't control.

Orson Welles narrates this distinctive segment of Night Gallery, and his mellifluous voice captures some strange, artistic quality about this story. As scary as Paul's turn "inward" remains, the narration reads like fine, lyrical poetry; and the visuals are dynamic, glorious and well-chosen.
In a certain sense, this is simply the darkest story of winter ever created because it concerns an interior winter; a metaphorical season of death that arrives like a storm and heralds the cessation of innocent youth.

As the story commences, Welles' recounts for us how Paul's unusual journey into mental illness originated; how his descent into the the never ending snow started simply as "nothing...just an idea. 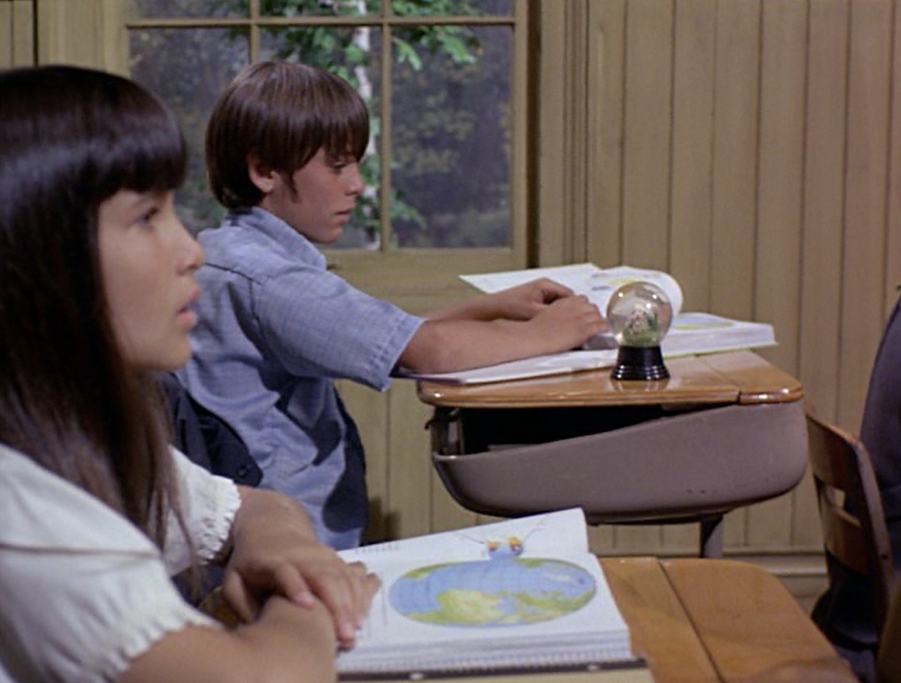 But then Paul's fantasy methodically grew worse and worse, becoming an obsession he couldn't turn away from. The notion is that Paul's real world is somehow dirty, muddled or confusing, and so his mind seeks out "the counterpoint of snow," that immaculate, perfect cleanliness of snow fall.
His mind finds the purity it desires, and can't let go of it once it is located.

In keeping with this visual theme of "whiteness" symbolizing purity, there are moments in the episode in which the audience sees Paul drinking milk (notably also white), or glaring at a glass chandelier, which promptly transforms into ice-laden tree branches. Everything Paul sees is soon affected by the unique filter (his filter) of snow. 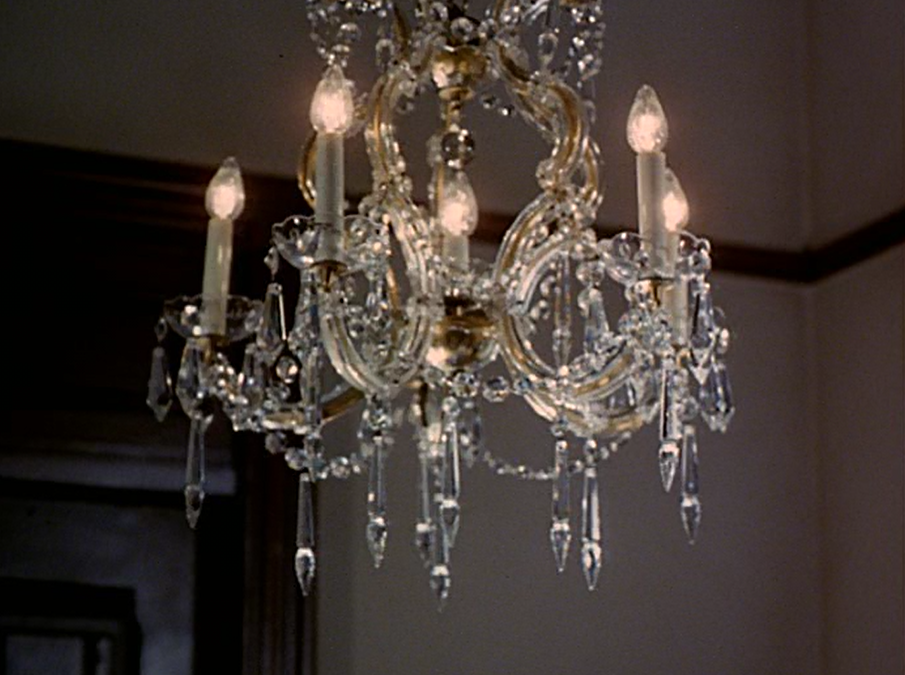 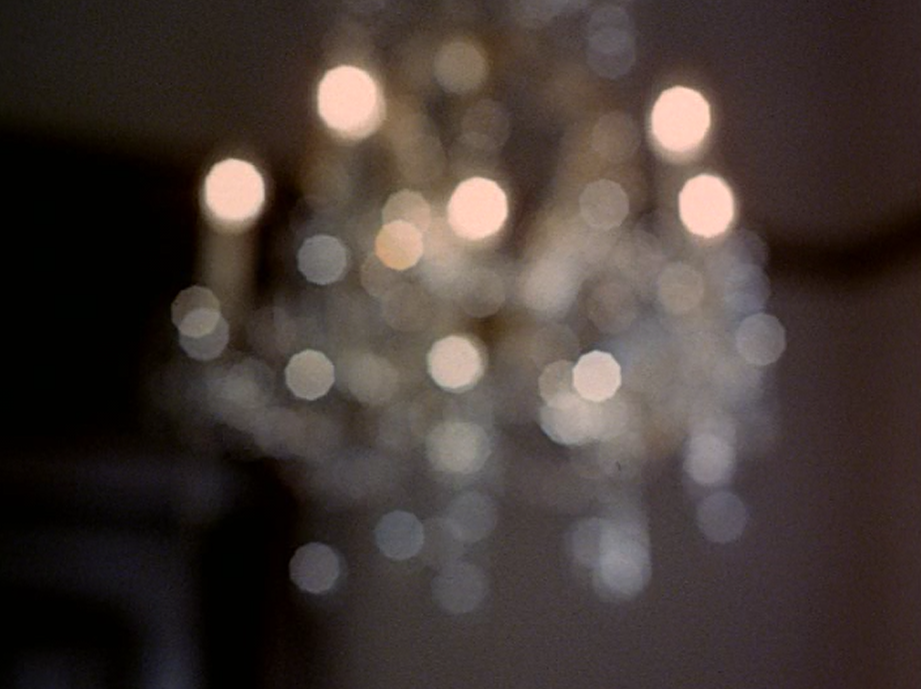 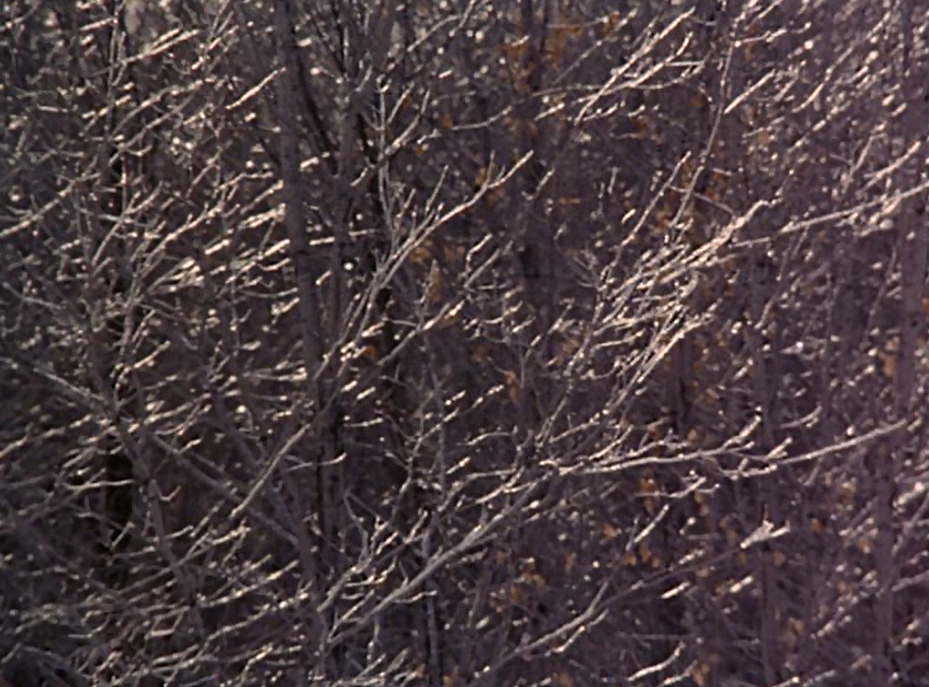 When Paul's disassociation from reality grows more pronounced, "Silent Snow, Secret Snow" begins to depict outsiders (a school teacher, parents, and a prying doctor) in the point-of-view subjective shot. They appear more than a little distorted this way; almost like aliens. The effect is that we -- like Paul -- find ourselves distanced from them and their hysterical concerns.

In a despairing, unhappy denouement, Paul finally turns away from the "inquisition" of the outside world for another place, an interior dwelling that "no one will ever again be able to enter."

In this white blizzard, the snow beckons more strongly than before, promising to tell Paul a beautiful story. It is a tale that gets "smaller and smaller," like a "flower that blooms into a seed."
Again, that's a perfect metaphor for Paul's unexpected turn inward; for his shrinking world. In pre-adolescence, we expect the youthful seed to bloom; for a child to "mature" and become something more than the sum of his or her parts.
Imagine the terror a parent must feel when a child's journey is the opposite: a doubling down, a turn away from the wonders of the outside world. Welles' narration is especially good in this latter part of the episode, whipped-up into a strange, almost sensual frenzy.

Mental illness can blot out life's colors. It can blot out life's vibrancy and nuance, creating a kind of obsessive blindness, and .here it is visualized as a snow blindness.
I don't want to say something corny or cheap about an elegant, scary show like this, but "Silent Snow, Secret Snow" is truly and inescapably...chilling. The pristine, cold beauty of this most singular Night Gallery episode will make your blood run cold. Especially if you happen to be a Mom or Dad....
at January 12, 2021