The Outer Limits: "The Sixth Finger" 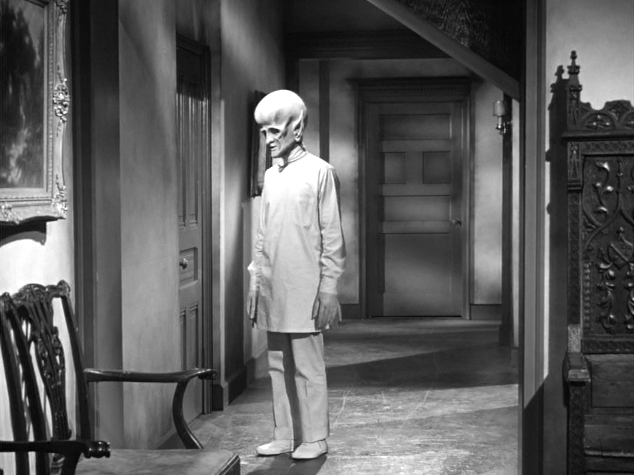 In “The Sixth Finger,” The Control Voice ponders the “wonders” or “terrors” that evolution may have in store for humanity across the next 10,000 years.
The narrative then shifts to an old English house where a scientist, Professor Mathers (Edward Mulhare) is working in a state-of-the-art laboratory and hoping to “speed up the slow process of evolution.”
In an impatient and aggressive coal-miner named Gwylim Griffiths (David McCallum), Mathers finds his opportunity. 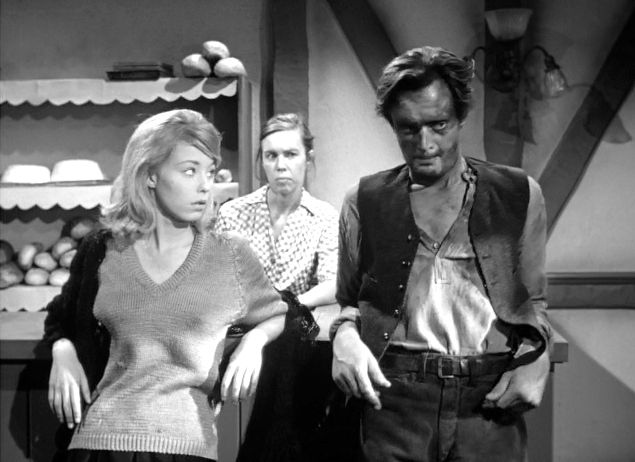 Gwylim volunteers to act as guinea pig in a dangerous experiment that will transform him into the man of the future, a being who – hopefully -- can grow beyond passion and self-destruction.  Gwylim sees his transformation as an attempt to escape a lifetime of “breathing coal dust” in the dark.
Mathers’ experiment is successful, but as Gwylim evolves (and adds a sixth finger on each hand…), some crucial element of humanity is subtracted from his mental gestalt.  Gwylim becomes all cold intellect, and loses the capacity to feel, and even to love. When he kills a woman with telekineses, he feels no remorse for his actions.
Worse, Gwylim sees the local village and its ignorant inhabitants as a mortal threat to him; a threat that must be destroyed at all costs… 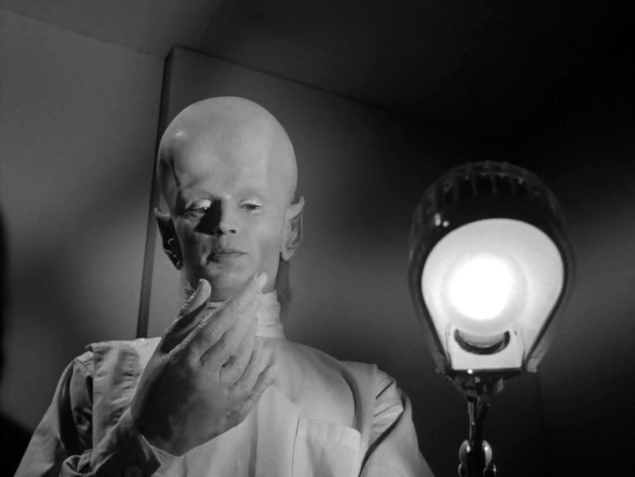 “The Sixth Finger” is a sort of trademark episode of The Outer Limits (1963 – 1965), and perhaps for good reason.  The story has a good, easy-to-comprehend hook, that man must not tamper in God’s domain, and the “bear” or monster -- a dome-headed, white-skinned David McCallum -- is both convincingly presented, and memorable in visage.
However, even though “The Sixth Finger” can be described in pedantic and clichéd terms, it remains a great episode of the cult-TV anthology because of McCallum’s character, Gwylim, and his aspirational quest.
When we meet Gwylim, he is covered in coal dust, excessively violent, and in love with beautiful Cathy (Jill Haworth).
But he realizes that he can never give her the kind of life that she deserves.  He is “too smart” to remain stuck in the coal mining town for the rest of his life, but there is no opportunity for him to do anything else.
Thus, he is effectively ensnared or trapped, and the episode symbolizes this trap with an expressionistic image.  At one point, the camera focuses on Gwylim’s balled-up fist as a visualization of his grim determination.  From this coiled fist, the viewer gets the sense that he is ready to do anything -- even kill-- to escape the meaningless life that has been “chosen” for him by fate (or is it God?) 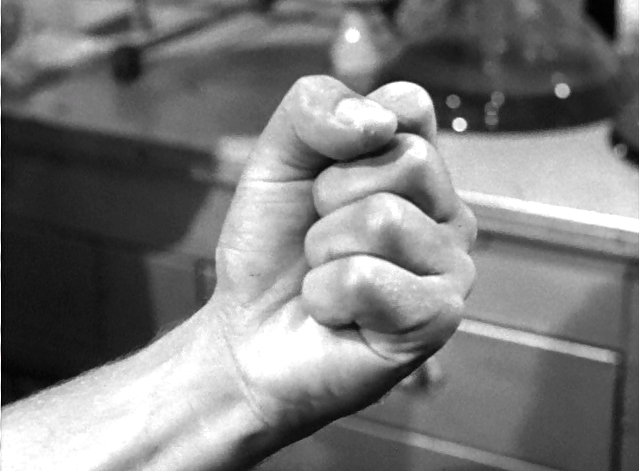 Gwylim’s ambition to escape the limitations of his life is matched only by the ambition of Professor Mathers, a man who helped to create the atom bomb, and -- out of an intense sense of guilt -- is now desperate to engineer an “end to war.”  It doesn’t matter the cost.  Mathers desires for man to “mature” out of warring and hostility so badly that he doesn’t care that he must push, or force the issue. 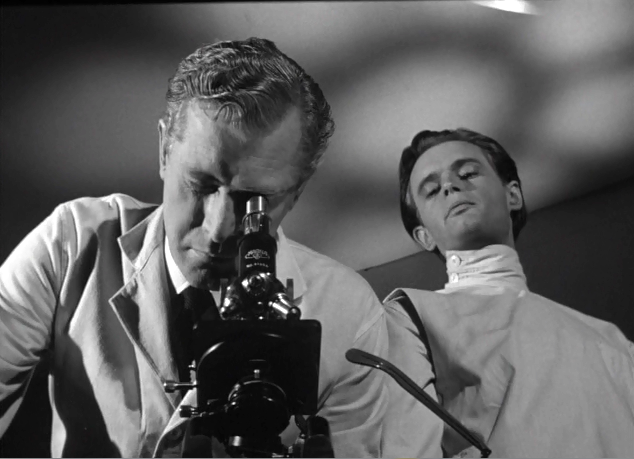 And at first Gwylim does evolve in wondrous fashion.
He learns to play the piano brilliantly (though he writes off his skill as “only a matter of mathematics and a degree of manual dexterity…”). He reads dozens of books too.  He develops his mind (and foregoes sleep, even…) and becomes a philosopher of sorts.
Gwylim’s growth and ascent away from humanity is nicely contrasted in “The Sixth Finger” with the nature of the village locals, who are mired in the past and virtual prisoners to their parochial world-view. They don’t want to acknowledge anything different or new, and see the handiwork of the Devil in every new feat of science.  They see in the old Gothic house not a state-of-the-art laboratory, but an affront to everything they have ever believed and known.
When Gwylim evolves beyond remorse, beyond pity, he sees no value in the locals, who, by his judgment, will not be truly “civilized for a million years.”  Eventually, however, he evolves out of the need to destroy them.  Instead, he just wants one thing: to continue his evolution.  So even as an advanced being, Gwylim still possesses human ambition, a driving desire to move forward.  And thus Gwylim keeps pushing, spurring his evolution ever closer to infinity, with the help of Cathy; the woman who took him “out of the blackness” in the first place.
In expressing his aspiration to escape his lot, and to be a better man, Gwylim proves anything but a monster or villain.  Indeed, he remains a character easy to relate to. He practically aches to give Cathy a better life, and to find true happiness. He hungers for something more than what life has given him.
Eventually, Gwylim dies while attempting to go forward, and the Control Voice concludes that Mather’s experiment was “too soon, too swift.”
The lesson is therefore one about the impatience that both men have demonstrated with the present.  Some things cannot be rushed, or pushed, “The Sixth Finger” notes.  Some states -- like ignorance or hostility -- must be endured until we are ready, as a species to move past them together.  That’s just the human condition, and even with the best of intentions and with the aspiration to be better than we are, we can’t trick our way out of it.
“The Sixth Finger” imagines both terrors and wonders in mankind’s future, but the part of Gwylim that endures from stage to stage is, on some level, also an admirable one.  It’s the part of our human nature that aches to know what is next, no matter the personal cost.
at January 05, 2021