The New Adventures of Wonder Woman: "The Boy Who Knew Her Secret" 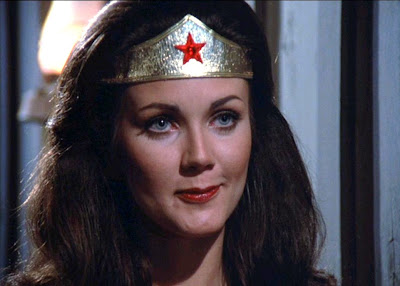 I watched Wonder Woman regularly as a child, and one particular episode has stayed with me ever since its first broadcast. It was the May 1979 two-parter entitled "The Boy Who Knew Her Secret", and it arrived very near the end of the series run.
This episode, written by Anne Collins and directed by Leslie H. Martinson, absolutely terrified me as a nine year old kid, though today one can easily detect how it owes very much indeed to the Body Snatchers franchise initiated by novelist Jack Finney in 1954.
In "The Boy Who Knew Her Secret," Diana Prince heads off to Crystal Lake -- no, not that one -- to investigate a strange meteor shower.  A concerned and inscrutable scientist, Dr. Jaffe warns Diana that these meteors are no mere rocks, but alien objects that have intentionally  "landed" on Earth.
Investigating, Diana learns that the scientist's bizarre assertion is correct. Ninety-nine pyramid-shaped devices have landed in the vicinity of Crystal Lake.  When a human being comes in contact with one of these silver pyramids, he or she exchanges souls with an alien life-form trapped within the strange container.  The human soul then becomes trapped in the tiny device, unable to escape, and the alien soul gains full possession of the body.
This exchange procedure is apparently "painless," but it certainly doesn't appear painless.  In fact, this episode is dominated by weird, almost surreal imagery of distorted human faces trapped inside the pyramidal structure.  This is the disturbing visual I recall most from when I was a child: an almost unbearable combination of terror and madness in that caged human expression. In Crystal Lake, a local high-school boy named Skip (Clark Brandon) watches helplessly as his mother and father both become possessed by the Pyramid Pod People.   No one will believe his wild story that his parents "look like" his Mom and Dad, but aren't truly human.   And again, this subplot closely mirrors various incarnations of Invasion of the Body Snatchers.
Even Diana herself nearly falls prey to the alien danger.  After she escapes from possession, she notes that something in the pyramid "was trying to trade places" with her, and that even she "couldn't stop it."
Soon, Skip and Diana join forces to learn more about the nature of this threat.  It turns out that the ninety-nine alien pyramids and their masters have come to Earth to stop a more dangerous alien: a criminal responsible for the murder of 800 of them.  This alien is difficult to trace, unfortunately, because he is a shape shifter. Only by assembling all 99 separate pyramids into one huge pyramid can the Pyramid Pod People stop the shape shifter once and for all.
A bit overlong at two-parts, "The Boy Who Knew Her Secret" certainly won't win any awards for subtlety or nuance.  Every time the evil shape-shifter appears on screen, he is accompanied on the soundtrack by what sounds like an exaggerated rattlesnake hiss.   And when the alien criminal finally takes on Wonder Woman, he turns into a rather lame, curly haired cave man (wearing fur, no less), who growls like a lion.  Their final battle takes place in a barn, and guess who wins? 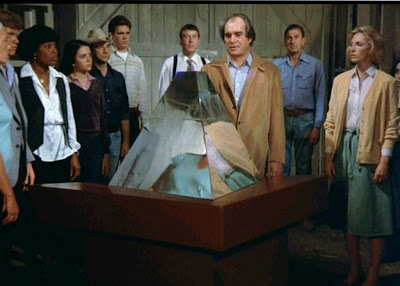 And yet, even today, I can see why "The Boy Who Knew Her Secret" stuck with me for all those years.
It's not just the creepy pyramid/entrapment imagery, although that's a big part.  It's that the episode successfully generates an atmosphere of intense paranoia and even scores a a few nice points about high school life at the same time.
In particular, all of Skip's friends, and even his girlfriend, Mel, are possessed by the aliens.  Almost immediately, they exclude Skip from their new clique.  "He's not one of us," they declare, and well, that's the point.  Teen kids -- even without alien influence -- select their peers and friends, and exclude others.  It's a fact of life.  But it never feels good to be on the outside, or to be judged according to what feels like an "alien" or unknown system of merit.
There's even a nod to the bugaboo of peer pressure in this two-part episode of Wonder Woman as unfortunate high school students are urged to "touch" the pyramids and welcome their new alien overlords.  Again, it's not subtle in any meaningful way, but the underlying idea resonates on some kind of gut level, I suppose.  We all fear being left out and being ostracized by others.  In its own way, "The Boy Who Knew Her Secret" plays on the universality of that human fear. I do know this for certain: it worked on me as a kid, and I still felt some traces of that irrational fear when I watched "The Boy Who Knew Her Secret" as an adult last week.
This kind of thing happens a lot with 1970s TV movies and series, I would submit. Although these older productions lack what we would today term convincing special effects or even much by way of persuasive action, their weird, occasionally creepy 1970s vibe shines through.  The idea and imagery central to this episode -- human souls locked inside silver space pyramids -- is both unsettling and inventive enough to sustain at least the first hour of "The Boy Who Knew Her Secret." 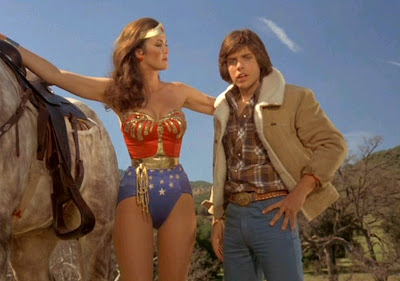 Geared towards the young (and the young-at-heart), this two-part episode of Wonder Woman thrives not only on the sub textual aspects of its Invasion of the Body Snatchers premise, but on Carter's sincere central performance too.
Obviously, Carter is an incredibly beautiful woman, but -- not unlike Lindsay Wagner on The Bionic Woman -- she manages to imbue Diana Prince with a brand of fetching openness, curiosity, and warmth.
In other words, the actress creates an admirable, distinctive individual without relying any of the "character" trappings we today commonly associate (unfortunately) with superheroes.  She's not the victim of a tragedy.  Diana's not filled with hate and angst.  She's not on a mission of revenge, either.  Instead, Carter's Diana Prince is centered, balanced and not wholly unaware of the humor in the situations she encounters.   She has a twinkle in her eye.  These qualities somehow makes her easier to relate to and root for.
In "The Boy Who Knew Her Secret," there's clearly  a bit of wish-fulfillment going on too, as socially-awkward Skip teams up with Wonder Woman and learns the truth about her secret identity.  Every adolescent boy would love to draw the attention of a funny, smart, heroic woman like Diana, and find, quite amazingly, that she can really relate to him.  For instance, Skip pretends to be "a dummy" in school so as not to disappoint anyone.  He likens it to his own "secret identity," and Diana identifies with this facet of his character.  She too must keep her super-heroic abilities close to the vest as Diana Prince.
Many episodes of Wonder Woman suffer from a dearth of resources.  The use of stock footage is pervasive in the third season, for isntance.  And yet, certainly, the series' heart was in the right place.  What Wonder Woman seems to have definitively lacked was the presence of  a consistent, guiding intellect behind-the-scenes, a man such as Kenneth Johnson.  He toiled on competing programs such as The Incredible Hulk and The Bionic Woman and truly raised the bar for superhero series of the late 1970s early 1980s.

Lynda Carter still shines on Wonder Woman, but the stories she was sometimes forced to vet fell short of being authentically "wondrous."  "The Boy Who Knew Her Secret" is likely one of the better 1970s-styled adventures, at least, and is filled with creepy imagery that still carries an impact.
at January 28, 2021