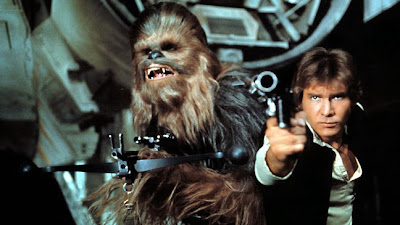 Reader and friend Duanne Walton provides his list for the greatest science fiction films of the 1970s.

"First of all, John, I got your Sci-Fi Movies of the Seventies on my Kindle, and I love it. Fun and thought provoking as always, and invaluable in helping me put together my list. And these are all "my" choices, not anyone else's. Of course, that can change at any given moment.
Anyway, let's begin:
10. Flesh Gordon. You get very interesting looks from people when you tell them you watched a porno for the stop motion effects.
9. Ssssssss. I first saw this one years ago on the CBS Late Movie. It was rarely shown back then and I sometimes wondered if I’d hallucinated it. It’s a really good movie (despite its' flaws) and one of Universal’s overlooked gems. The makeup is very effective.
8. Food of the Gods.  I begged my brother to take me to see this, but he refused. He saw it and swore the hero (I'm presuming he was talking about Marjoe Gortner) looked just like me. Years later, I finally saw it on Valentine's Day 1980, on Chicago's Channel Seven 3:00 Movie. And Gortner looked nothing like me! The next time I saw my brother, I promptly read him the riot act. And he'd forgotten all about it.  That said, this does hold a special place in my heart. I do love a good schlockfest.
7. Fantastic Planet. I'm an advocate of this movie pretty much the same way you are for The Blair Witch Project. One of the most bizarre movies ever made. You thought Yellow Submarine was trippy? This one out-trips Yellow Submarine!
6. Close Encounters of the Third Kind. It's been a while since I've seen this, But I remember watching the Special Edition every time it aired on HBO. It's better than Goofy Golf!
5. A Clockwork Orange. It loses its' visual punch after Alex gets arrested, but still very good. Viddy well, brother.
4. Escape From the Planet of the Apes. A classic case of mood whiplash.
http://tvtropes.org/pmwiki/pmwiki.php/Main/MoodWhiplash

3. Alien. A perfect blending of Sci-Fi and horror.

2. Superman. You'll believe a man can fly, and that superhero movies can be good.

1. Star Wars. What hasn't this movie had an impact on? Every seventies Sci-Fi movie that came after it pretty much rode on it's coattails. For better or worse, The Force will be with us - always.

And there you have it."

Duanne: First, I want to thank you for supporting my book.  I appreciate that very much, and it pleases me to no end to know that you are enjoying it.

Secondly, I love a list that finds room for Flesh Gordon, Sssssss, AND Fantastic Planet.

Such strange movies to be one in decade, and yet there they are.  I really battle with Sssssss.  Parts of the film are downright genius, but the ending is abrupt, and I feel like the reveal at the end is a bit of a let-down. But parts of that movie (Strother Martin!) rock beyond all measure

I also agree with you about the virtues of Fantastic Planet.  It's a trippy, visually magnificent film that capitalizes on many of the ideas that had been roiling in the genre since Planet of the Apes in 1968.