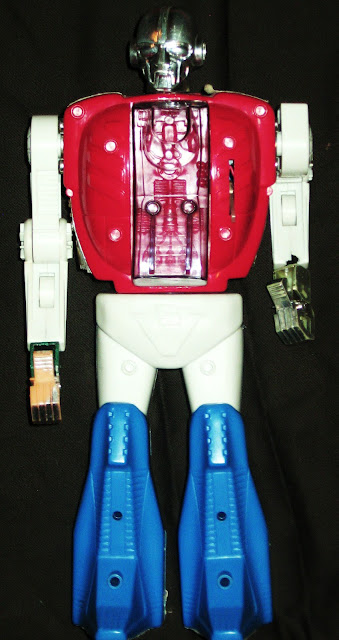 When I turned seven, one of the toys I wanted most for my birthday was "Biotron" a huge interchangeable robot from the Mego Micronauts collection.

My granny -- Tippie from Texas -- came through, and I was thrilled.  And incidentally, she came through for me again for Christmas that year with the glorious Micronauts Battle Cruiser.  But that's another story.

Biotron is a "motorized robot" who "holds up to three Micronauts" and "adapts to other Micronaut accessories," according to the box legend.  The same legend instructs kids to "use him four ways."

Fully assembled, Biotron is a huge robot, standing approximately a foot tall.  He runs on two "C" batteries, and when activated can kind of shuffle around on his jet-like, blue-plastic feet.  He's the perfect companion to another Micronauts robot, Microtron, and in the Marvel Comics, indeed, they were matched up together often.

One of the Micronauts (Space Glider, Galactic Warrior or Time Traveler) can ride inside Biotron's transparent chest panel, and I always loved Biotron's gripping, snapping hands, which could catch the enemy, the Acroyear.

I don't know if I'm remembering it exactly right, but I think that Biotron was my first big Micronauts toy.  I had a few action figures (Galactic Warrior and Time Traveler) at that point, but none of the "big" items.  That soon changed, but I always had a love for this chrome-faced, goliath of a robot.

Today, Biotron has a good home in my office, though his box is showing a great deal of wear, and so are his hands.  The chrome has worn off his grippers in some spots, revealing a kind yucky green under-color.  (I hope it's not mold...).
at July 26, 2017