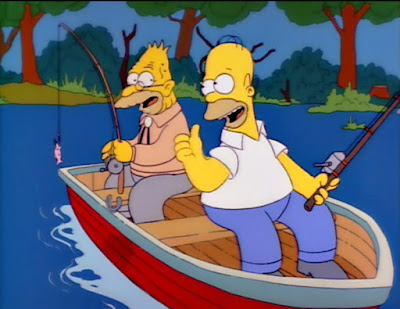 Fishing is the activity of catching fish, for food or for sport.

Based on my experiences with my late, beloved father-in-law, I also know that fishing is, in many cultures, a bonding experience between parents and their children.

Throughout cult-television history, fishing has been depicted in both regards, as a means of survival in a primitive (or non-technological setting), and as a meaningful relationship experience.

The act of sitting together on a pier, or in a boat -- parent and child -- while waiting to catch a fish at first may not seem important or valuable. But in those long hours, often in the early morning, wisdom is transferred from one generation to the next.  If not wisdom, experience, or even laughs.  These moments of talking are punctuated by the excitement of catching a fish 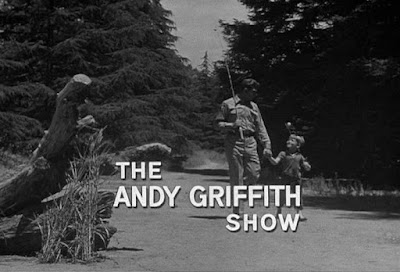 This idea is encoded in the very genetic fabric of The Andy Griffith Show (1960-1968). The introductory montage features images of a father and son (Griffith and Ron Howard) together, fishing rods slung over their shoulders, as they walk side-by-side. 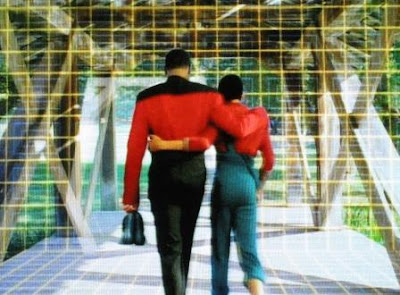 The Simpsons (1990 - ), over the years, has also featured numerous instances of fishing, featuring Grandpa and Homer, and Homer and Bart.  And, of course, the occasional mutant fish. 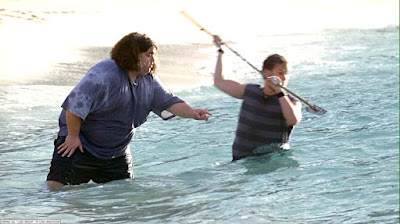 In terms of fishing to survive a hostile environment, there are many episodes of cult-television series that feature fishing as a necessary tool to one's survival.  "Stranded on a desert isle" programs such as Gilligan's Island (1964-1967), Land of the Lost (1974 - 1977), and Lost (2004-2011) feature many instances of fishing, to support the castaways.

An episode of the Planet of the Apes (1974) TV series, "Tomorrow's Tide" involves a fishing community of humans, ruled over by intelligent simians. The human astronauts from the past, Virdon (Ron Harper) and Burke (James Naughton) show the primitive humans how to more efficiently fish, using nets (instead of spears).
at July 24, 2017