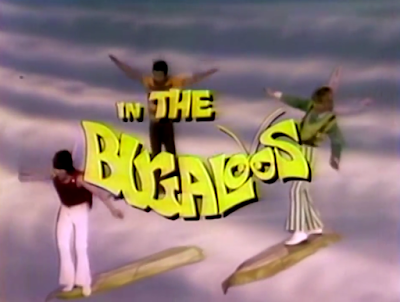 The evil Benita Bizarre (Martha Raye) fails to get Rock City's DJ, Peter Platter, to play her latest record album on the air. In fact, the album practically explodes on the turn table.

While fuming over her failure, Benita overhears a song coming from Tranquility Forest. It is Joy (Caroline Ellis), who is house-cleaning. To make the chore more palatable, she sings "I'm as Happy as can be."

Benita captures Joy and uses a strange machine to exchange voices with the Bugaloo. When the boys return from surfing, they learn what has happened, and plan to return Joy's voice to its rightful owner. 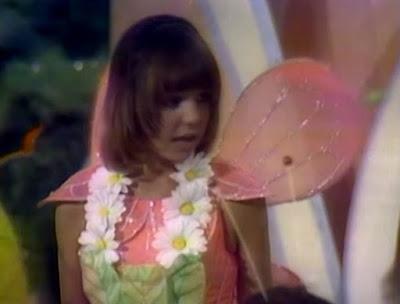 The second episode of The Bugaloos is very much like the first. Benita Bizarre attempts to create a hit by using the Bugaloos' vocal talents, and by capturing one (or more) of their number.  In this case, Joy is the victim, and she loses her voice to Benita.  At this early juncture in the series, there is one fact I can claim for certain: Caroline Ellis is enormously appealing to watch as Joy. She is so beautiful, and her musical numbers are great.  I understand why a generation of kids fell in love with her, in particular.

Beyond that notation, it is likely unnecessary to note the sexism of the episode set-up. But I'll do it anyway.  It's time for spring cleaning, and the boys don't want to do it. They go out surfing (on clouds), leaving the one female Bugaloo to tend to the homestead. (In fairness, Sparky -- who may be male? -- also hangs around).

On the other hand, it is also fair to note that the two best-drawn characters on the series thus far are  the female ones, Benita Bizarre and Joy, so that factor could weigh against accusations of sexism.

Although this episode (and series) aired first, Lidsville had a similarly-named episode a year later, "The Great Brain Robbery," which suggests that the writers were working over-time to think of plots and titles for these kids' series.  The Lidsville episode concerned brainwashing.

I watched this episode with my ten year old son, Joel, and he seemed to prefer The Bugaloos to the episodes of Lidsville that he watched. He felt that this episode at least had a plot line that he could follow, whereas Lidsville, he said, seemed like an incoherent free-for-all.  I can't quibble with his review.

Here's Joy's song of the week: