In “The Cure,” Virdon (Ron Harper), Burke (James Naughton) and Galen (Roddy McDowall) learn that malaria is ravaging a village of humans they recently visited.  Over Galen’s objections, they return to help the infected.

Meanwhile, General Urko (Mark Lenard) wants to burn the village to the ground to destroy the disease, but Dr. Zaius (Booth Colman) sends a renowned Chimpanzee doctor to discover a cure, especially since the disease begins to fell apes as well… 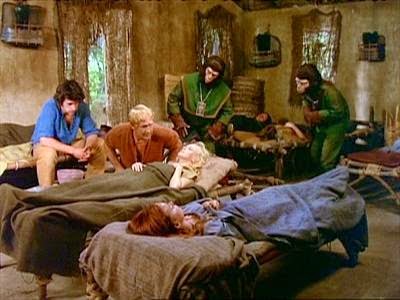 “The Cure” is a not-particularly-scintillating episode of the short-lived Planet of the Apes series from 1974. The episode features an intellectual debate pitting determined ignorance (Urko) against the quest for knowledge (Burke/Virdon), but the debate is a little too simple-minded for my taste.

It’s all well-and-good that the human astronauts represent knowledge and wisdom, but it would be nice if some apes could do the same occasionally.

At its worst, the Planet of the Apes series is all about humans putting the “primitive” talking apes in their place for thinking they are so superior to man.

Yet if one considers the history of Earth in this universe, this is really faulty thinking. It wasn’t the apes who destroyed the world, after all, but “advanced” humans.  When the series forgets that, it isn’t very dynamic, interesting, or -- frankly -- intellectually honest.  This is the same premise that scuttled some episodes of Buck Rogers in the 25th Century (1979 – 1981).

The guy from the era of global nuclear war and a worldwide holocaust is going to lecture the people of the future about being a good human being?

The point is that for Planet of the Apes to really function adequately as a series, the human characters must confront and reinforce or alter their beliefs too.  When it's just about them smugly beating the apes, there's a flatness to the storytelling. 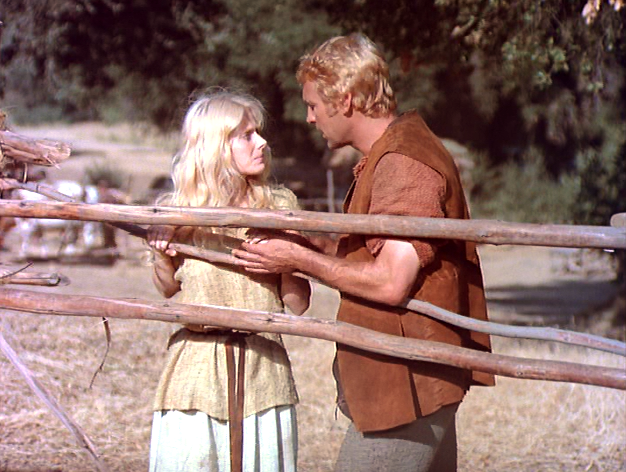 Also, it’s a little tiring that the human astronauts are always romancing, at least to some degree, human villagers that they encounter.  Virdon (a married man…) must gently turn down the advances of Amy (Sondra Locke) here, and he does the same thing with Arn in “The Legacy.”

In “The Surgeon,” Burke shows more than normal concern for a shunned young woman.

I realize that the series was trying to capture many demographics simultaneously, but it just seems terribly predictable and hackneyed that there is always a beautiful woman for the astronauts to romance…and then promptly leave behind.

Similarly, Virdon can be really insufferable as a lead character. He constantly gets his friends into trouble, and acts in a kind of imperious fashion.  He always does what he wants, and rarely consults the others.

Galen calls him on that tendency here, and Virdon apologizes, but he doesn’t really take the feedback seriously. When Galen reminds Virdon that he not only trusted Amy with his life, but he trusted her with Galen’s, Virdon says “chalk it up to the fact that I’m only human.”

I hate to tell Virdon this, but not all humans act so inconsiderately, or so arrogantly. 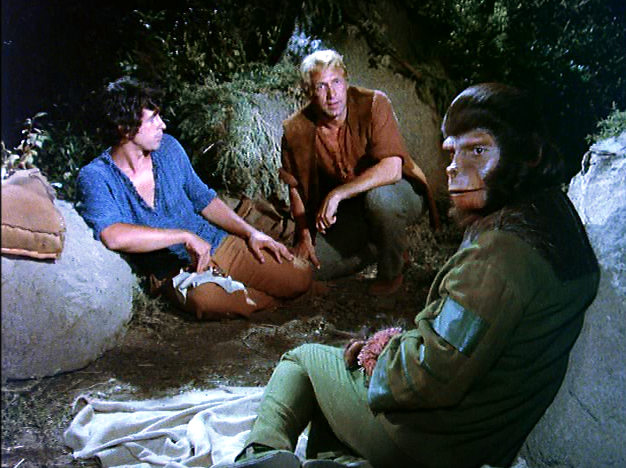 I like the Planet of the Apes series more than many critics and fans do.  I think it is very good when it diagrams the differences between ape and human culture, a kind of race-based class system.  But some episodes tend toward dullness because they simply involve helping humans we don’t really care about, and outsmarting the ape establishment.

“The Cure” has a strong point to make about how it is necessary, sometimes, to undertake dangerous tasks to help others, and to simultaneously push forward the boundaries of science.  But “The Cure” could also be a little more lively, a little less rote.