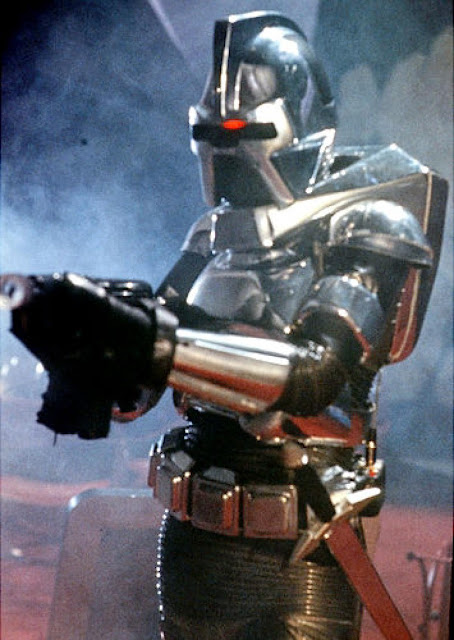 The color red is often associated with blood, or fire.  It is a primal color, representing anger or rage.

And eyes, of course, are the windows to the soul.

So when characters possess red eyes, we are seeing their "real" or "true' identity as a primal, angry, rage-filled individual.

That's exactly how red-eyed beings have been used in cult-TV since time immemorial.

Science fiction television is often obsessed with evil robots or machines. It is not a surprise, then, that these "emotionless" but malevolent robots are often designed to feature red eyes. The scarlet orbs suggest that there is something more than logic and circuitry to these evil or dangerous individuals. The red eyes suggest a contradiction: a dangerous machine with anger issues. 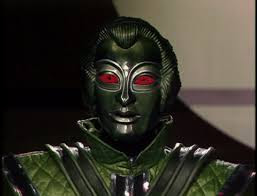 The original Doctor Who (1963-1989) serial "The Robots of Death" certainly conforms to this tradition.  There, the robot servants of a decadent human society begin to commit murder, infected by a "disease" of sorts.  A would-be victim can tell that a robot has the killing disorder by the presence of bright, red eyes.

The robotic Cylons of Battlestar Galactica (1978-1979) are famous, similarly, for the roving, red "cyclops" eye. The most fearsome and individual Cylon seen in the Glen Larson series appears in the episode "The Lost Warrior." There, the robot -- named "Red Eye" -- is the enforcer for a corrupt human on a pioneer planet.

But red eyes are not limited to evil machines, either. They symbolize pure evil in a number of TV situations or scenarios. The soul-sucking Vorvon of Buck Rogers in the 25th Century ("Space Vampire") possesses eyes that glow red when he hypnotizes his victims, for instance. 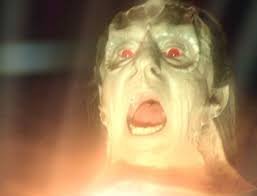 And -- back to Doctor Who -- the Devil's possessed minions in "The Satan Pit" also have eyes that burn fire red. 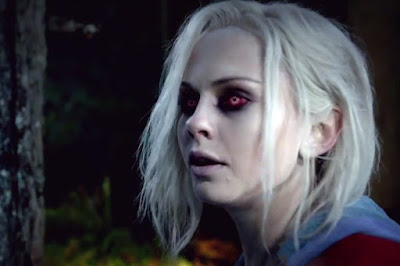 Finally, one might say that red eyes represent passion or appetite, as well as evil. That explanation fits with the series iZombie (2015 - ), wherein people turn to zombies, replete with red eyes, when they want to eat brains.
at July 10, 2017