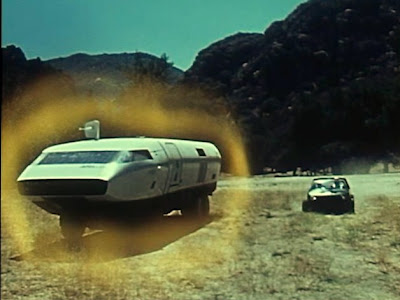 Captain Jonah (Terry Lester) and the team from the Ark II set out on a vital mission to find three children who have disappeared from their village, and return them home.

The unusual thing about these kids, however, is that they come from a place where everyone communicates telepathically.

The telepaths there view normal humans -- “Speakers” -- suspiciously, and shun them.  Jonah, Ruth and Samuel see this rescue mission as a way to change that perception.

The warlord Brack (Malachi Throne) captures the children in his village (the left-over Planet of the Apes set, last seen on Ark II in “The Flies”), leaving Jonah and the others with few means to rescue them.  But the mission is successful, and the children return the favor by rescuing Ruth (Jean Marie Hon), who has become trapped on the Ark II during a fire.

After the children are returned home, Jonah muses about the experience.  The telepaths may be a force for good or evil in the future, but hopefully the children who interacted with Ruth and Jonah will grow up and remember the Speakers’ acts of kindness… 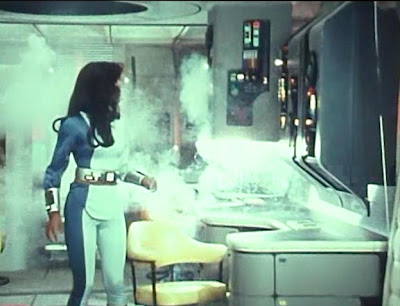 “The Mind Group” is the first Ark II episode I’ve reviewed thus far that finds the series protagonists interacting with characters who are not scavengers or, poor, fearful rural villagers.

The telepathic children of “the Mind Group” hail from a nearby community of Espers, and perhaps it would have been more interesting, narrative-wise if the Ark II went to that locale to attempt to make contact with the group and open peaceful relations.

Still, you’ve got to love the easy-going, live-and-live nature of the heroes in this Saturday morning TV series from the 1970s.  Neither the Ark II crew nor the (invisible) hierarchy that supports the vehicle’s continuing mission express fear at the thought of powerful telepaths (and telekinetics) developing into a powerful community nearby.  In real life, the very fact of their existence would be cause for a pre-emptive attack, at least according to some people. 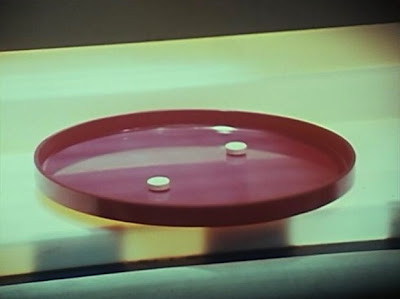 Instead, the Ark II crew sticks to its sense of morality and decides that when the telepaths choose to emerge from their shroud of xenophobia -- for good or evil -- the Ark II will deal with them then.  This is a nice re-assertion of values, but a recent episode “The Balloon,” just preached against the evils of xenophobia, so it’s contradictory and a little hypocritical that the telepaths here get a pass…without even a lecture about opening up their society.

In terms of Ark II tech, “The Mind Group” unveils a portable force-field generator that Jonah uses in a pinch.  And we also get our first up-close look at Ark II’s futuristic kitchen.  Even though we’ve seen Adam cooking in the kitchen in the past, this episode reveals that the vehicle possesses a quasi-replicator device, one that can turn little white vitamin pills into any food a person desires.  Here, a kid chooses meat and mashed potatoes, and we see the pills transform…