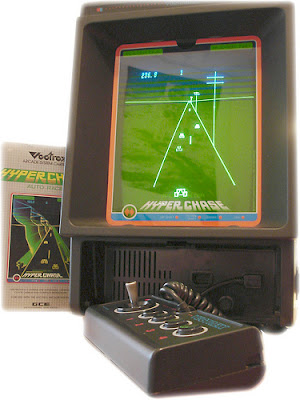 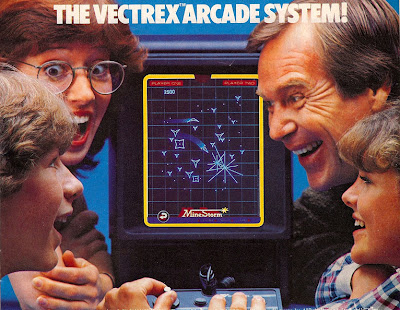 The first video game console wars are long behind us, now.  But thirty years ago -- way back in 1982 -- Milton Bradley produced a unique alternative to the Atari 2600 and Intellivision.  That alternative was called the Vectrex, a game console with a built-in "arcade-style" monitor which meant, in short, that you didn't have to connect it to your television antenna with a box.

The built-in monitor wasn't Vectrex's only distinction.  The "revolutionary" design featured "line graphics" for "laser sharp visual effects" rather than the standard pixels we associate with other game systems.  In other words, the games looked a great deal like the arcade version of Battlezone: Green lines against a deep black background. 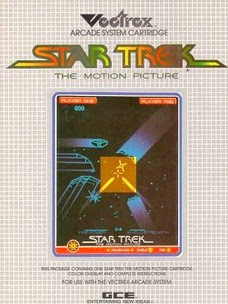 Selling for about wo-hundred dollars at the time, the Vectrex came complete with a "panel controller" (rather than the traditional joystick) and  a consumer could also purchase peripherals including a light pen and a 3-D imager.  The latter looked a lot like an early 1990s-style virtual reality helmet.

A great number of games were released for Vectrex, including the popular MineStorm, which pitted the player (in a spaceship) against floating mines, magnetic mines, fireball mines and the like.  Other games included Star Trek: The Motion Picture, Berzerk, Cosmic Chasm, Pole Position, Starhawk, and CubeQuest.  I never had the Star Trek game, but it certainly looks awesome.  Your mission was to travel through the "nine sectors" of space and "seek out and destroy the Klingon mothership."

Vectrex barely survived the Great Video Game Crash of 1983, but the system was discontinued in 1984.  I remember owning one of these toys and, during my amateur movie-making high-school days, featuring the Vectrex as a background "space monitor" in one of my productions, called The Solaris Enigma.