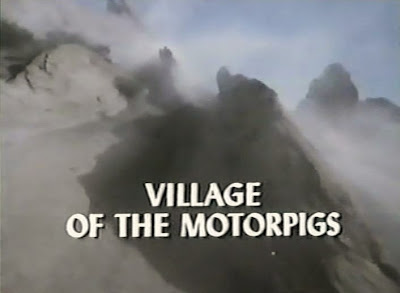 The fifth episode of Otherworld is called “Village of the Motorpigs” and it strives for a real Mad Max/The Road Warrior-type production design and vibe.  Underneath that sort of scruffy desert look, the episode is actually an anti-drug narrative, one that reinforces the human being's need for purpose, and the value, of course, of family.  That last bit is a recurring theme in the program.  No matter how bad things get, the Sterlings can always depend on one another. 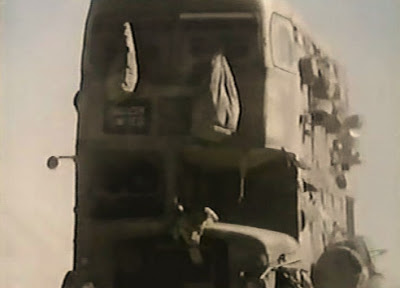 In “Village of the Motorpigs” the Sterlings have chartered an old ,broken-down bus (driven by an old, broken-down driver…) to cross the Forbidden Zone.


The bus stops at a Zone Trooper check-point, and the Sterlings attempt to hide in a smuggler’s compartment in the back of the bus, but are captured.


Before the family can be taken to Kroll (Jonathan Banks), a motorcycle gang led by a guru called --  I kid you not -- “Chalktrauma” (Marjoe Gortner) rescues them, and takes them to his biker commune in nearby caves.

As the Sterlings soon find out, this isn’t much of a rescue at all.

Chalktrauma doesn’t permit family units to remain together, believing that such traditional social units only divide loyalties.  Furthermore, Chalktrauma maintains control of his society by keeping all his people “stoned” on a drink called “the Chalk.”  High on “the chalk” all the time, nobody questions the guru’s authority.

One of the bikers, however, proves an ally.  Tango (Vincent Schiavelli) tells Hal that he is a former minister in the Church of Artificial Intelligence, and that one of his ancestors came from the “other world.”


To prove it, he shows Hal a U.S. dollar bill.  Anyway, Tango reveals that any one of the bikers can issue a “challenge of rule” to de-throne Chalktrauma.  Hal resolves that this is the course he must take.

Hal and Chalktrauma joust on bikes for supremacy, but just as Hal is about to lose, Zone Troopers raid the weird commune, and the Sterlings, with Tango’s help, slip away to safety.

If Chalktrauma’s “challenge of rule” sounds somehow familiar to you, it may be because it is an apparent law of many, many cult-tv cultures.  It appeared in The Starlost (“The Goddess Calabra”) and The Fantastic Journey (“Children of the Gods”) before being resurrected here for “Village of the Motorpigs.”  It’s a convenient way to easily vet regime change, I suppose: challenge the leader, and usher in a new way of life.  That way, your characters don't need to have an army at their side, or wage all-out war.

For an episode about a colony of rough-and-tumble, desert-dwelling motorcycle riders, Otherworld’s “Village of the Motorpigs” certainly tows the conventional, traditional line.  Not that there’s anything wrong with that, however.  But teenage Trace gets scolded by his mom, June, when he samples the chalk and “tunes out,” for example. 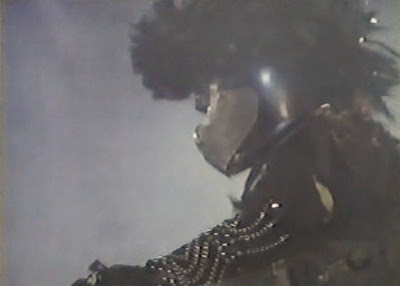 Meanwhile, Gina teaches Chalktrama’s lustful son (Jeff East) that people should fall in love, or at least get to know each other before having…relations.  Mom, meanwhile, refuses the chalk and pines for Hal, while he attempts to find a way out.

So, in short, “Village of the Motorpigs” = don’t do drugs + don’t have premarital sex + promote family values.


Again, nothing at all wrong with any of that, but it’s just kind of…square.


Just once, I’d like to see a sci-fi show where inan altered-state isn’t depicted a priori as a totally negative thing.  Star Trek’s “This Side of Paradise,” Space: 1999’s “The Guardian of Piri” and Farscape’s “Thank God it’s Friday, Again” all push the same agenda: that any substance which alters your mental state will also kill your sense of purpose and desire to produce, to do good work.  It’s not that I disagree with the premise, just that a little variety in storytelling is nice.  At least Spock does admit that the spores made him happy in “This Side of Paradise,” but that’s as far as cult-tv goes… 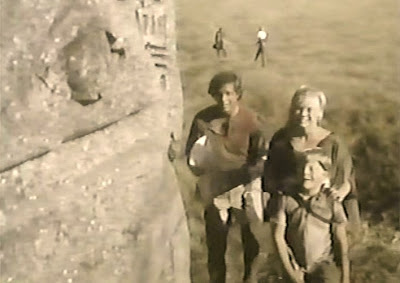 “Village of the Motorpigs” starts out as a clips show, with Gina relating to their bus driver the story of the family’s arrival in this world, and in reaches its zenith in a well-written, well-performed scene between Hal and June.


He instructs her to run away with the children if he doesn’t survive the “rule of challenge” (also known as the “blood clash.”)  June is understandably reluctant to leave her husband, but understands his point.  The motorpig culture is toxic to family units, and so the children must be free of it.  It’s an emotional scene, and well-done.   Both characters come off well.

So far, I’d have to declare that I like “Village of the Motorpigs” least among the series’ first five episodes.  The pilot featured that great discussion of souls and artificial life, the second episode “Zone Troopers Build Men” had a great character arc for Trace, “Paradise Lost” was a nice handling of an adult topic (marital infidelity) and “Rock and Roll Suicide” was just balls-to-the-walls nuts…and fun.  “Village of the Motorpigs” isn’t exactly bad, I’d conclude, just a bit less inventive (and more clichéd) than the other episodes.