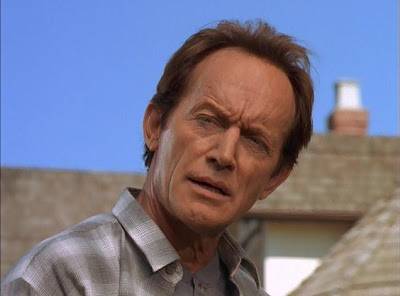 I have been watching with great interest over the last week or so the ascendant campaign to resurrect Frank Black, the lead character of Chris Carter’s Millennium (1996 – 1999).  The Back to Frank Black Campaign with Fourth Horseman Press will soon be launching a book dedicated to the beloved character, as reported by TV Wise. And series star Lance Henriksen himself spoke recently at a convention about his belief that the character will indeed return.

Twentieth Century Fox should be listening to the emerging groundswell, because this is the perfect time to produce a Millennium movie or TV-movie.  Forget the tiresome and inaccurate argument that since the millennium  actually turned in 1999 – 2000 the series is somehow out-of-date or past-its-prime.  The contrary is actually true.

Stylistically and context-wise, Millennium was actually so far ahead of its time, I would argue, that the world is only now catching up with the concepts Chris Carter, Frank Spotnitz, and the other writers conceived during the three-year span of the series.

In terms of story-telling style or approach, consider just for a moment how often Millennium’s complex formula has been tossed into a blender, ground down to its component parts, and then presented in pieces, to great ratings success.

For example, the CSI formula of the last decade resuscitates the “forensic investigation” aspects of the Carter series.  Programs such as Criminal Minds ask audiences to travel inside the twisted minds of the most monstrous human criminals, just as Frank Black did on a regular basis.  And series such as Medium focused, to a large extent, on the value of unconventional insight in solving crimes.  Millennium brilliantly combined all these threads, plus Frank’s home life, plus the symbolism of the “yellow house.”

Outside of this style, Millennium obsessed on what I call in my book, Terror Television “those shadowy, half-understood fears which affect the human heart and soul.”  The monsters in the series, though sometimes originating from religious mythology, were also, often, human in nature.  Frank faced these human “monsters from the Id” on a weekly basis in the 1990s, but many of the aspects of life that vexed him in the Clinton Era have only grown more pronounced today.

If the 1990s represented the first significant decade of conspiracies run rampant (George Bush I’s “New World Order,” or The Clinton Body Count), then in 2012 the conspiracy mentality is, in fact, on steroids.  Today, we have Birthers, Truthers, Deathers -- you name it -- and they are all tearing at the fabric of our shared national reality and identity.  Wouldn’t it be nice, once more, to have a man like Frank navigate this shadowy, mysterious world and separate truth from fiction, fact from propaganda?

The TV program's fictional Millennium Group was the prime mover of a secret history in the series, but just because the year 2000 came and went without dramatic incident, that doesn't mean the conspirators would  stop attempting to shape the future. In fact, one sect of the Millennium Group, the Owls, believed the apocalypse will occur in 2020…just eight years distant.  Imagine the plans they must be making, right now, right? 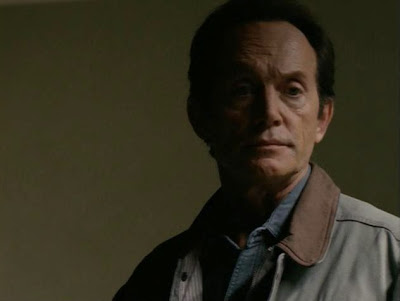 On a connected note, we need gravelly-voiced, insightful Frank Black to pick up his adventures again because of who we have become since Millennium left the airwaves. We seem more divided in 2012 than we have been, certainly, in my lifetime.  Political enemies don’t merely have disagreements anymore, they try to destroy one another.  The person with the loudest voice wins the cable TV sweepstakes and facts become lost in “gotcha” point-scoring. It’s not so much “The Truth is Out There” -- as was the mantra of Carter’s The X-Files -- but “The Truth is Buried Over There, But Let us Distract You From Finding It.”

The quality I admired so much about Frank Black, and one abundantly evident in Henriksen’s brilliant, layered portrayal, was his utter lack of susceptibility to such bullshit.

Even when provoked, Frank didn't take the bait or grow angry or irrational (unless, of course, his family was actively threatened).  Instead, he was reasonable and stable, and that is, perhaps, a strange thing to write about a character who has suffered a nervous breakdown or two (but who’s counting?).

But perhaps because Frank had seen and understood madness up-close, he had inoculated himself from it on a daily basis. One of the continuing delights of Millennium, even today, is how Frank fails to give his competitors or nemeses the satisfaction of getting a rise out of him.

To put the matter another way: Frank isn’t worried about how popular he is.  He isn’t worried about pleasing the boss.  He doesn’t concern himself with partisanship or ideology, but instead tries to solve a problem the best he can, in the most reasonable way he can.  Importantly, he isn't selling anything.  Now it's not like he's Mr. Spock or Dexter – Frank clearly possesses strong emotions – but yet he  possesses this equanimity; this sense of wisdom and fairness. He would defend the weak, the voiceless, those assumed guilty.
He is The Calm.  And the rest of the world is The Storm swirling around him.

Mr. Henriksen has spoken eloquently about Frank Black in the War on Terror Age, but I also believe that Frank Black is the perfect hero for America at home, right now, because he possesses these qualities of stability and reason that often seem missing in action.

In other words -- perhaps more than ever - we need Frank Black.  The Time is past near.  It's now.

If you agree with that sentiment, write a letter and support Back to Frank Black's campaign: