In “River of Flames,” Jeff and Bill see a hologram of Judy, who asks them to meet with the Under Dweller leader, Krador.

When they do so, Krador warns the humans that the “Below World” could be doomed because a nearby volcano is erupting and lava, if unchecked, will bury their reactor room.

Meanwhile in Ape City, Dr. Zaius and the Ape Senate must make a crucial budget decision.  Should they devote new funding to scientific research, or to weapons?

Urko makes the case for weapons, while Zira and Cornelius do the same for scientific research.  Zaius decides that if Urko can capture Blue Eyes (Bill), the army will have its funding.

With their laser drill in hand, Bill and Jeff attempt to save the Below World of the Under Dwellers.

When they fail, however, they get an unlikely assist from Urko! 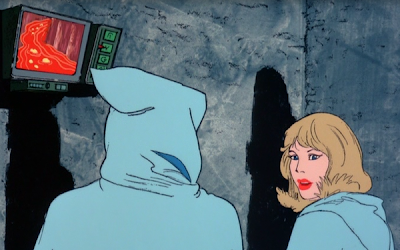 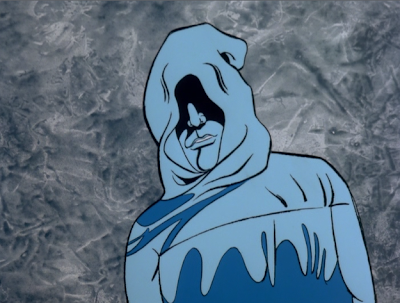 There are some amusing touches in “River of Flames,” the seventh episode of Return to the Planet of the Apes (1975).

In one scene, two apes discuss a new movie that they heard was good…The Apefather, and in another Urko blunders into saving the Under Dwellers.  He shells a mountain in an attempt to kill Bill and Jeff, but instead creates a “vent” for the lava, and saves the Below World.

The episode also marks a turning point for Krador, leader of the Under Dwellers, and the humanoids.  Bill and Jeff agree to help the leader only if they get to take Judy (or Oosa) in return.  Krador agrees, and at episode’s end, acts as a friend to the humans.  Thus, the Under Dwellers are no longer quite the threat to the astronauts that they had been, previously.  Judy, however, promises to return to Krador when the time is right, when the "prophecy" (that she will lead them...) must come true.

Otherwise “River of Flames” is pretty predictable stuff, and a bit of a “runaround" episode.

The astronauts lose their laser drill, and then recover it.  They tangle with Urko again, and once more get the better of him. 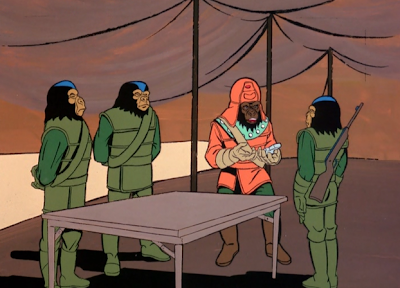 Then, finally, Urko gets his hat handed to him by Dr. Zaius in the Senate Council.  At this point, in fact, Urko is in danger of becoming a buffoon more than a credible threat.  The series was meant for young eyes, on Saturday mornings, and that fact is made clear from the fact that there is no real menace here, other than the volcano.