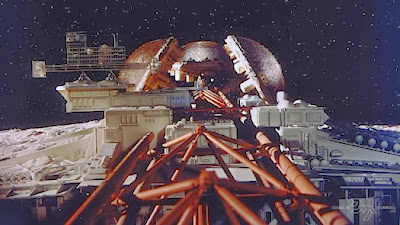 "10. Star Wars. The movie event of the decade that resonates even today. The Force will be with you, always. Lucas stumbled in later years, but was dynamite out of the gate.

9. Superman. The big screen adaptation of the greatest of all heroes is still the one film all comic book adaptions strive to live up to. Christopher Reeve made us all believe.

8. Alien. Still one of the finest Science Fiction/Horror hybrids ever with a classic scene etched in all of our minds. HG Giger gave us a creature that was an overnight sensation.

7. Invasion of the Body Snatchers. Up there with John Carpenter's The Thing as the textbook example of how to do a remake right. So effective was the Scream, that many still think it was part of the mythos from the very beginning. And it made Amazing Grace scary.

6. Rollerball. In the future there will be no war, no sport, only THE GAME. Jonathon E becomes a hero in a world where individual heroes are not allowed. Als features one of the most wonderfully pataphysical ideas ever, Zero-The Water Computer.

5. Colossus-The Forbin Project. Along with 2001, Colossus stands as the finest portrayal of a computer run amok. There would be no Skynet of Terminator without Colossus. Cold, simple, logic conquers the Earth.

4. A Clockwork Orange. Brutal and upsetting, Kubrick also makes us stop and take the time time to think about our violent nature.

3. The Andromeda Strain. The reverse of War of the Worlds, as man may be brought down by the tiniest microbe as it evolves and changes. Tense and scary, this one really makes you believe we may not win in the end.

2. Slaughterhouse 5. Billy Pilgrim, unstuck in time, learns to make the most of his strange existence as he jumps all over from childhood to another planet. Why can't more films tackle big ideas like this.

1. Silent Running. Depressing, uplifting. What more can be said. Arguably the most heartbreaking Science Fiction film ever. You will be drowning in tears as Dewey tends the garden as it drifts off into space. A moment I shall always treasure from my childhood, Mom and I crying together as we watched it on TV.

Honorable mention in no particular order.

David: Your list is superb, and I agree with you about the emotional roller-coaster ride that is Silent Running (1972). What a beautiful, and heart-breaking film.  It is an absolute treasure of the genre, to be certain.

Your list is also the first that remembers Slaughterhouse 5.  It's a solid film, and an adaptation that Vonnegut was very happy with.