This game was available on both cassette (!) and floppy disk, but my memory is that I played the game on disk.  It was so long ago now, I'm not entirely certain about that detail, however.
Regardless, my father was vice principal at Mountain Lakes High School in New Jersey, and was close friends with a 1980's Atari guru, one who was outfitting the school with a number of computers as the PC era began in earnest.  One day, out of the blue, my Dad arrived home from school (on his motorcycle...) with a bundle of video games on disk and cassette.  I had never heard of any of these games, but it felt like Christmas morning.

They had titles like Blue Max, Trains, Murder on the Zinderneuf, Bruce Lee, Astro Chase, B.C.'s Quest for Tires, Caverns of Mars, and last -- and best -- Zombies!
In Zombies, the goal was to recover the "enchanted crowns of the middle kingdom" from an evil wizard named Wistrik.  The cleric had apparently stolen the crowns and stored them in a variety of hellish dungeons where they were protected by rampaging zombies, giant spiders and poisonous snakes.  The realms had ominous, mythological-based names such as "Cankaya Keep," "The Abyss," "The Stygian Crypts," "Tartarus" and "The Realm of Impossibility." 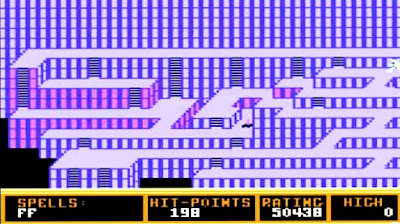 Designer Edwards was inspired in part by his love of TSR's Dungeons and Dragons, as he wrote in the marketing booklet for Zombies. But he also wanted to get away from simple shoot-em-up games of the era.  Thus he devised Zombies with a few diabolical and genius twists.
Among these were the fact that as a player you were not awarded multiple lives.  When you died...you died, and had to begin the game again.
Secondly, there was no "elimination" of the supernatural enemies and vermin.  Instead, you had to drop crucifixes around yourself (while you ran...) as supernatural barriers to the surrounding threats.  Additionally, the player could acquire scrolls with spells such as "Freeze," "Protect" and "Confuse."  Believe me, these came in handy...
And thirdly, the game was two-player compatible, but the two players did not compete against one another.  Rather, they had to work together, in unison, to avoid the zombies and retrieve the crowns.  This made the game perfect for when my friends came over after school, or on Saturday afternoons, for surviving Zombies was an exercise in team work.

Zombies also featured, according to the promotional material: "3-D graphics, on-line instructions,"..."74 different screens, high-score save to disk, full sound and color, zombies, poisonous snakes, giant spiders, evil orbs, scrolls, talismans, magic spells, lost crowns and spectacular underground scenery."
On that last front, Zombies showcased unbelievable, M.C. Escher-inspired screens that, despite the young age of the form, were authentically mind-blowing in terms of viewer perspective.  I've written here before how I'd like to see a consistent set of aesthetic criteria applied to video games because I do consider them an art form. When I think about it, Zombies is likely the game that began me thinking along those terms, even as a teenager. The game was beautiful to behold, and completely immersing.  For instance, I remember (I hope correctly...) that when the zombies touched you during the game, your life energy would bleed away quickly, but also that the game screen would pop and crackle, like you had been struck by electricity.  If you ask me, I can still "feel" that shock, though of course, no such physical shock was actually delivered.
I can't even begin to estimate how many hours I spent during my teenage years navigating Tartarus, the Stygian Crypts, or the Realm of Impossibility.  But it was a lot, I'm certain.  I have wonderful memories of playing this game with my best friends in high school.
The graphics may look primitive today, but the game play was absolutely incredible.

Email ThisBlogThis!Share to TwitterShare to FacebookShare to Pinterest
Labels: Memory Bank. From the Archive