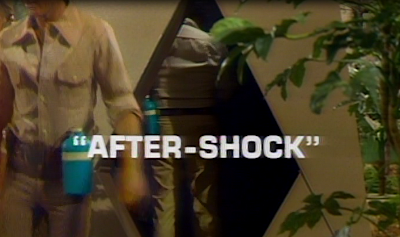 An earthquake strikes Altrusia both conceptually and literally in the third season premiere of Land of the Lost (1974 – 1977), titled “After Shock.”
Behind the scenes, star Spencer Milligan (Rick Marshall) departed from the series, replaced by Ron Harper as Uncle Jack Marshall. And a new team of writers, led by Sam Roeca (Valley of the Dinosaurs) and Jon Kubichan replaced outgoing writers such as Dick Morgan. 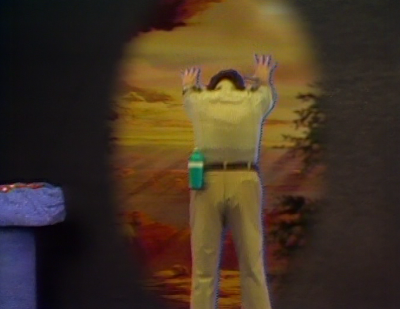 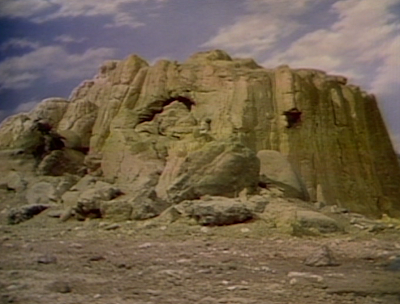 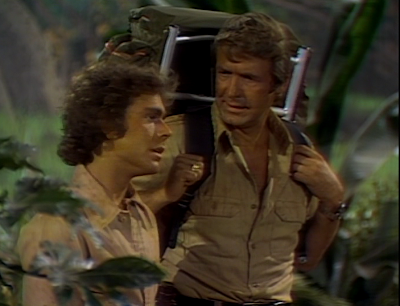 In terms of the actual storyline, “After Shock” begins with a quake that sends Rick Marshall -- working inside a pylon -- spiraling home to his home in California, leaving Will (Wesley Eure) and Holly (Kathy Coleman) to contend with a shifted reality in Altrusia.
High Bluff is buried in rock, taking all of the Marshalls’ equipment with it, and a strange new, two-headed monster (which Holly christens “Lulu”) appears in the lagoon.  Uncle Jack also falls into the Land of the Lost, a fact which conforms to the one-person-in, one-person out balance of the strange land as viewers understand it..
Finally, Chaka (Philip Paley) also loses track of the other Pakuni, Ta and Sa, though his explanation for their disappearance doesn’t make a whole lot of sense.  Chaka claims that the other Paku were separated on the other side of a crack in the land, running far away.  But we know from Land of the Lost history that Altrusia is a small pocket universe that circles around on itself, and so there’s no way for the Paku to have disappeared or left.
It would have been better if Chaka simply saw Ta and Sa fall into a crack in the Earth, though that explanation may have scared the kiddies, I suppose.
After Will, Holly and Chaka find Uncle Jack by the lagoon, they all go in search of a new home, and must battle the fearful Sleestak for possession of “The Old Temple” near the Lost City.  It isn’t clear if this structure is supposed to be the same old temple that was featured in second season stories such as “The Musician,” though it looks completely different here. 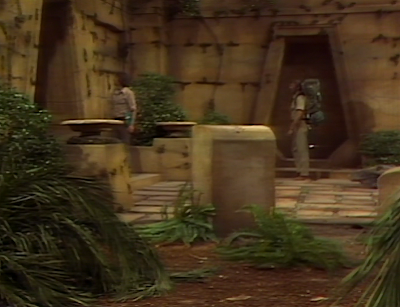 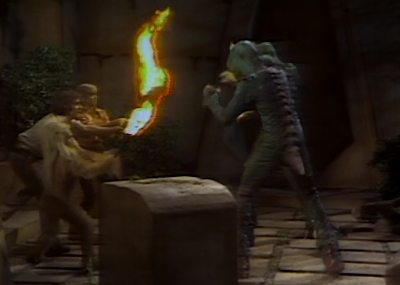 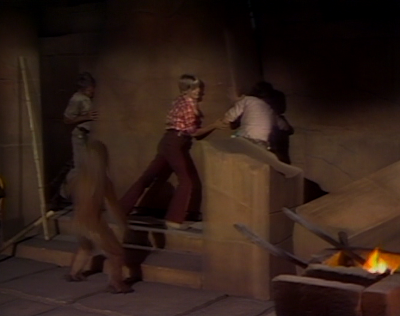 As for Jack, Ron Harper is a capable actor, and he did a great job as Virdon on Planet of the Apes (1974).   The writing here establishes Jack as an engineer, which helps to explain how he is able to build so many interesting and helpful devices in the Land of the Lost, like wheels for the heavy temple door.
Gazing at “After Shock,” one can debate, certainly, the idea of change as a positive for Land of the Lost and change as a negative factor.  The episode starts out promisingly as Will reminds an upset Holly that “we aren’t alone.  We’re just on our own.”  In some sense, this is the moment the series -- and Rick Marshall -- have been preparing the kids for since the family first fell into the land of the lost.   Everyone has always known that separation was a possibility.
There’s an argument to be made that the arrival of Uncle Jack is thus truly unnecessary, and the series should have continued just with Will, Holly and Chaka living together, in no need of a father figure.  Instead, Uncle Jack’s arrival feels like the idea of change…without real change.  He’s a new Dad, essentially, and so the story line and characters don’t truly move forward in a meaningful way.
Even the idea of losing the cave at High Bluff and moving to the Old Temple is promising, but its potential largely undelivered by future episodes.  The temple set is a really good, really intriguing one, and very different from the old cave.  The set is dotted with all of these large stone doors, ostensibly leading to other unexplored chambers.  But no episode of the series ever explores what chambers or tunnels lay beyond those doors.  That’s a disappointment, because a core aspect of the series has been, in episodes like
“Downstream” and “Follow that Dinosaur,” an exploration of new territory.  Instead, the Marshalls and Chaka move in during “After Shock” and never really look around their new digs.  Even as a seven year old kid, I wondered why the family didn’t explore its new home. I wanted to know what was behind those doors.
“After Shock” also shows some of streamlining of core, long-standing Land of the Lost concepts. Now, both Chaka and the Sleestak Leader clearly and understandably speak English, for example. It’s a shift, and again, one with ups and downs.  If one chooses, one can register Chaka’s sudden understanding/learning of English as a side-effect of his experience in “The Musician,” near the end of the second season, when his intelligence was “evolved” by the Builders of the Land of the Lost.
I used to consider Chaka’s new Tarzan/pigeon-English a continuity error, but after watching several episodes of the second season in which he and the Marshalls waste precious minutes of story time trying to communicate with one another via the Pakuni language, I can’t argue that this streamlining is a dramatic mistake, especially considering the events of “The Musician.”
“After Shock” is a pretty strong episode of Land of the Lost, the beginning of a new era that promises some intriguing story-lines.  The problem isn’t that the new direction is bad, but rather that follow-up episodes don’t necessarily deliver on the potential promised by this installment.  The second episode, for instance -- called “Survival Kit” -- is one of the worst episodes of the entire series and entirely inconsistent with what we know of the Sleestaks, the Land of the Lost, its history, and its inhabitants.
at December 19, 2020