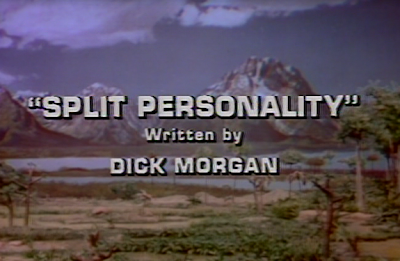 Watching the final episodes of Land of the Lost (1974 – 1977) Season Two, the intrepid viewer will experience the distinct sense that markers are being laid down; sign-posts that point towards a possible direction for Season Three.
This was evident especially in “The Musician,” a story about Chaka’s evolution and mental acceleration.
And it’s also evident in this week’s story, “Split Personality,” which finds the Land of the Lost interfacing – albeit uncomfortably – with an anti-matter version of itself. 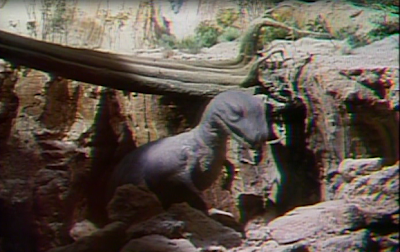 When the two universes “grind” against one another, earthquakes result, and the anti-matter Holly makes contact with her matter universe doppelganger. The anti-matter version speaks through “our” Holly and comments, cryptically, about a fearsome “Black Sleestak.”
Yet no black Sleestak is seen in this episode…or in any episode of Land of the Lost, for that matter.  So who, or what, is she talking about?
It’s another one of those wonderful, ambiguous, almost throwaway lines that suggests something that could be, if a clever writer only follows up on it.  The inclusion of a line like that also suggests a much larger universe, and larger mythology around Altrusia.  I’ve always been kind of bummed that Season Three didn’t pick up on many of these hints and mysteries.
Reviewing “Split Personality,” I’m also impressed with the series’ sense of continuity.  Here, Will mentions events from “Album,” the first season story in which the Sleestak created a false image of his mother in hopes of snaring the family.  Such touches are expected today, of course, but in the mid-1970s such references seemed almost revolutionary.
“Split Personality” also continues the series through-line that indicates Holly is more sensitive or “open” to experiences in the Land of the Lost then her family members. Here, she is contacted by her other self, and able to communicate with that self.  This season has been an especially strong one for Holly, Land of the Lost’s revealing her maturity in the face of some pretty tough, scary situations.  Alas, Will seems developmentally-arrested at his hyper, obnoxious older-brother stage.  When I was growing up, Will was always my favorite character, but this time around, I can see how much care has been given to develop Holly. 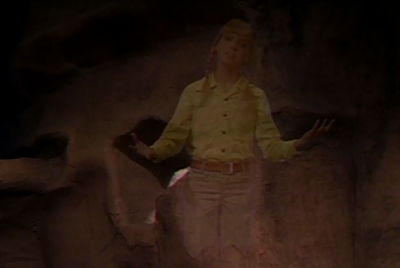 In terms of set design, “Split Personality” is also ingenious.  Rick and Will come upon their anti-matter counterparts in a strange, glowing cave.  Because the two “worlds” came in contact at odd angles, everything is askew.  A matrix table is seen standing not on the floor as we expect, but jutting horizontally out of a wall.   Land of the Lost is a low budget kid’s series, but the production designers really worked over time and came up with imaginative visuals that seemed indicative of a consistent -- if bizarre -- universe. 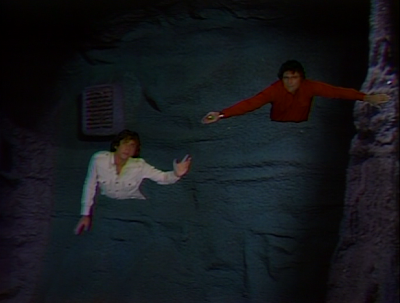