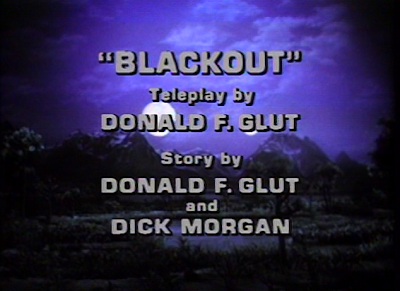 The final episode of Land of the Lost’s second season is called “Blackout,” and alas, it’s a bit of a retread.
“Blackout” is essentially the same story as seen in “The Longest Day” and “One of Our Pylons is Missing.”
In all three of these stories, something goes wrong with the smooth functioning of the Land of the Lost, and the Marshalls must step in and set things right, usually with some push-back from the (ignorant) Sleestak.  It’s a story about environmentalism, essentially, and shepherding the land wisely so that all may profit and prosper from it. 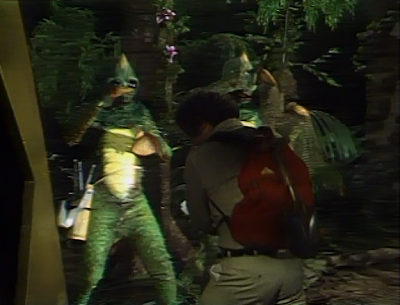 In “Blackout,” the Sleestak have made use of the secret second clock pylon to freeze time during the night.  They have done this foolish thing so that the the Altrusian moths, which fertilize Sleestak eggs, can proliferate in number, and thousands of Sleestak eggs will hatch.   Eternal night, they believe, will restore the Sleestak race to its former glory.
However, the Sleestak haven’t realized that without the warmth of the sun, the temperature will drop, and the moths will die out quickly.  In trying to improve their existence, the Sleestak have only endangered it.  Again, it's not difficult to read this as a metaphor for misuse of the environment.
Enik (Walker Edmiston) visits the Marshalls after questioning the Library of Skulls, and seeks Marshall’s help in convincing the Sleestaks of their error.  Because Rick Marshall has saved the Sleestak in the past, he can return to the Lost City on this occasion under the protection of a clause called “Altrusian Grace.”
As expected, the Marshalls set things right in the end, and all is well. 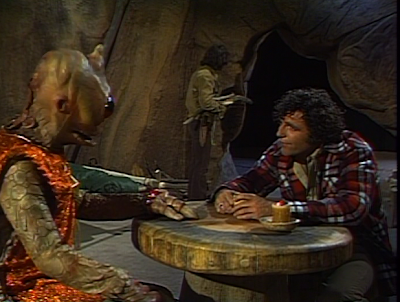 In all, “Blackout” is a safe, predictable and rather unsatisfying end to a strong season of this Sid and Marty Krofft series.  Stand-out episodes include “The Zarn,” “The Musician,” “Split Personality,” and the outstanding “The Pylon Express.”
There have been some stinkers too (“Nice Day,” for instance), but overall the series offers many strong installments in its sophomore sortie. What I like most about the second season is that it stretches the boundaries of the land, with episodes about Altrusia’s strange, pulsing heart (“One of Our Pylons is Missing,”) and a periodic portal between worlds (“The Pylon Express”).  Even in the weaker episodes there is a sense of consistency and order to this universe.
The third season of Land of the Lost -- which I start blogging next week -- absolutely changes the game.  Rick Marshall (Spencer Milligan) disappears from the series, replaced by Uncle Jack (Ron Harper), and many shifts in terms of continuity occur.
= 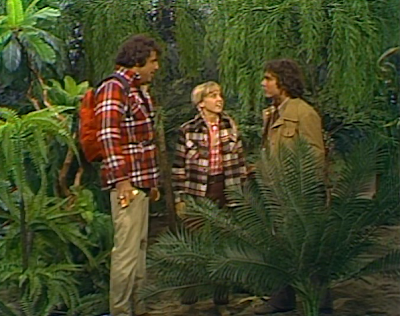