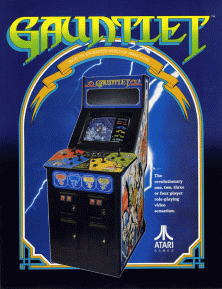 During my freshman year at the University of Richmond in the fall of 1988, there wasn’t a whole lot to do, socially-speaking.  I was a skinny kid in big glasses who didn’t go out for sports and liked Star Trek.

I had no interest in fraternities or the school’s religious clubs (though, truth-be-told, I did have an ever-so-brief flirtation with a Baptist Bible Study group, which helps to account for my extensive knowledge of Scripture…)
Anyway, I met my beautiful wife, Kathryn, at the beginning of my sophomore year and my life changed for the (infinitely) better.
But before that ever happened,  I spent an inordinate (and probably unhealthy) amount of time in the Pier, the campus Student Building, playing a classic arcade game from Atari, called Gauntlet (1985).
As you may remember, Gauntlet was unique in that it was a four player arcade game.  Intrepid gamers could play as the Warrior, the Valkyrie, the Wizard and the Elf, at least originally.  The idea was to battle enemies such as ghosts and demons while traversing dungeon-like labyrinths and environs.
I looked Gauntlet up on Wikipedia out of curiosity and it is apparently part of a genre called “hack and slash,” a phrase that pretty well describes the game’s content as remember it.
Among other things, Gauntlet is also apparently famous because it had a kind of computerized narrator who would voice warnings (“Your life is running out”) and reminders (such as “shots do not hurt other players…yet.”)   I can’t say as I remember much specifically about game play, only that we would play the bloody thing for hours, and lose a hell of a lot of quarters in the process.   It’s a good memory from a year that, in some respects, I’d rather forget.
In terms of characters, I always played as the Valkyrie -- the female warrior in the foursome -- in honor of my enduring love of the same-named character from Battle Beyond the Stars (1980).
I can’t remember why we did so, but on one memorable night in 1988, my pals and I drove downtown instead of to the student building to play Gauntlet at a bustling city arcade in Richmond, one very close to the now-defunct Byrd Theater, if memory serves.
I should have been studying for an upcoming computer science exam, but instead, I think we were out at the arcade from midnight to 2:00 am, and I blew twenty-five dollars on the infernal machine.
Ah, to be eighteen and dumb as shit again…
Anyway t I’m thinking I really need a restored Gauntlet arcade console in my rec room.
That…and an air hockey table, but that’s the subject of a different post.  I'll just close this one by saying I recently visited the University of Richmond campus for the first time in probably a decade, and was deeply disappointed, though not surprised, to see that Gauntlet was long gone.
at December 17, 2020