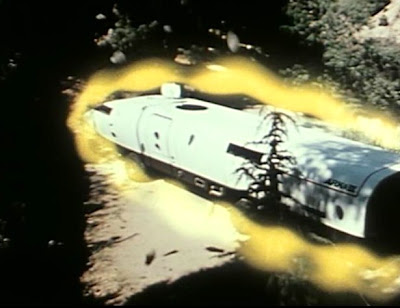 In the second episode of Ark II, entitled “The Rule,” Captain Jonah (Terry Lester) makes log entry 1441, which puts this episode ahead of last week’s “The Flies” in terms of internal continuity.

Making the entry as the Ark II patrols “Area 32, Sector 16” Jonah notes the presence in the area of “primitive cave dwellers.”

His team’s mission: “to improve the quality of their lives” in “any way” the crew can.

While Adam and Ruth (Jean Marie Hon) are out patrolling in the Ark Roamer, local scavengers attack the Ark II, and Jonah orders Samuel (Jose Flores) to activate lateral and vertical force fields.

As the scavengers hurl rocks at the advanced vehicle, the force fields repel them, sending the stones back in the air.  This effect is achieved by reversing the film, a cheap technique but one that still looks stunning. 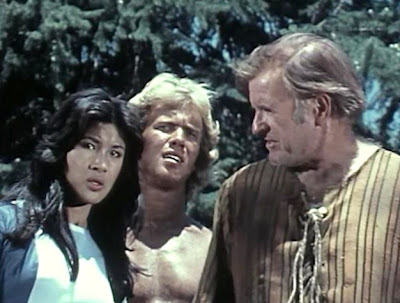 When Ruth is injured in a Roamer crash and Adam goes to look for help, a young man named Jeff (David Abbott) rescues her and takes her back to his village.  Unfortunately, Jeff’s father is the ruler of the village and he imposes a draconian “rule” upon all citizens.  Anyone who cannot work to support the village must be “cast out” into the wilderness.  On this day, the ruler plans to exile a blind man and an old woman for their inability to toil in the fields.

After Jeff himself is injured while attempting to build a hang-glider, his father adheres to the mandatory rule, and exiles his son.  Though Ruth complains about a cruel society that doesn’t care for its most vulnerable members, Jeff’s father is unmoved.  He is stuck in tradition, and can’t see outside of it. 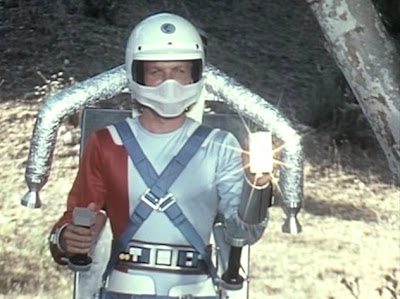 Soon, scavengers steal the livestock and food from the village, leaving it without supplies to survive the coming winter.  Ruth, Jeff and the other exiles team with Jonah, Adam and Samuel to set a trap for the scavengers and recover the stolen supplies.   When the cast-out members return to the village with the missing resources, the ruler finally recognizes their worth -- and the error of his ways -- and promise to abolish “the rule” from this day forward.

In the second episode produced, though the eighth aired (on October 30th, 1976), Ark II gazes intently at the price of survival.  In a difficult, post-apocalyptic setting such as this one, everyone must contribute to the communal good, but human (and humane…) societies must also care of the elderly and the disabled.  In this village, that’s explicitly not the case, and the Ark II team arrives to remind the cruel villagers that “each of us – young and old alike – has a skill” to contribute.  Civilization forgets that fact at its own peril, and could take a “giant step backwards” according to Jonah in his log entry. 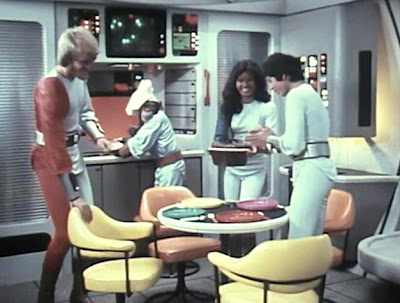 Although aired over forty years ago, “The Rule” grapples with ideas that are still important in contemporary American society. Do we live by the law of the jungle, or the laws of humanity?  Even in times of austerity and want, can mankind still be civilized and care for those who can’t care for themselves?  Some people see that kind of “care” is actually a hand-out to be disdained, while others view it as a sacred duty.  “The Rule” also suggests that some “laws” must be applied flexibly, or human society could lose its sense of compassion and devolve into cruelty.

In terms of the development of Ark II’s fictitious world, this episode shows us more of the Ark Roamer, and the Ark II’s powerful force fields.  “The Rule” also reveals a unique hand-held device: a defensive weapon of some kind, which can cause brief blindness in an opponent long enough to distract them or make an escape. I don’t remember if it shows up again in the series, but I’ll be looking for it. 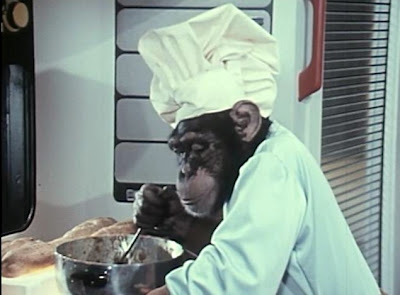 Probably the big question in this week’s episode involves Adam.  In case you forgot, he’s the super-evolved chimpanzee, the one with the capacity to speak.  Oddly, when Ruth is knocked unconscious in the Roamer accident, Adam does not choose to verbally respond as Samuel attempts to contact the vehicle.  Doesn’t he know how to use the radio?  Why does Adam leave Ruth alone and go in search of Ark II, when he could open a channel to the vehicle and report, verbally, what occurred?  That’s something of an inconsistency.  We’re not meant to view the character as an uncommunicative animal but as an intelligent character.  He plays chess, after all, as we saw in “The Flies.”

The coda for “The Rule” also brings up a question that probably should not have been raised at all. We see Adam wearing a chef’s hat and preparing dinner for the human crew in the Ark II’s kitchen area.  Really…a chimpanzee preparing meals?  I’m not entirely certain about the hygiene aspects of this.  Would you fix food prepared by an ape?  Is Adam smart enough to understand hygiene?

Does he shower or otherwise bathe?  Does he wash his…paws?

Once more, the very worst aspect of Ark II is the strange inclusion of a talking monkey as a crew member.  It would have been wonderful and worthwhile if the makers of the series had chosen to define Adam’s capacities and characteristics a bit more clearly, early on.