In “The Surgeon,” Alan Virdon (Ron Harper) is shot by gorillas and his wounds require emergency medical care.  Unfortunately, there are no hospitals for humans in this topsy-turvy, unequal world.

Desperate to save their friend’s life, Galen (Roddy McDowall) and Burke (James Naughton) take Virdon to an ape hospital near Central City, where Galen’s ex fiancé, Kira (Jacqueline Scott) is a prominent surgeon.

At the hospital, Burke realizes that Virdon needs a blood transfusion, but there are many superstitions and stigmas associated with giving blood because of a failed transfusion between humans years earlier.

Burke most conquer this societal fear, particularly for a human orderly, Travin (Michael Strong), and the daughter, Arna (Jamie Smith Jackson) that he has shunned since the earlier transfusion took the life of his son.

Also, the fugitives realize that a book of ancient human anatomy -- Principles of Surgery -- is necessary to save Virdon, and, unfortunately, it is stored in Dr. Zaius’s (Booth Colman) house. 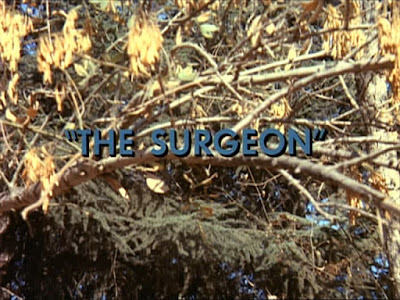 “The Surgeon” sees our triumvirate of heroes return to Central City due to a medical emergency. This time, it is Virdon who is injured, and in need of medical attention. Much like other Planet of the Apes (1974) episodes -- particularly "The Good Seeds" -- this tale focuses on the human astronauts conquering superstition and bringing old knowledge to the future world of the apes.  Also, the episode exposes the racial breach that sees humans treated as second class citizens.  Here, we learn that medical advances don't typically benefit them.  "Health care" in this world is the province of the apes.

Many episodes of this short-lived series focus on the idea of the ape world as a kind of pre-Renaissance, medieval realm (except, significantly, for the presence of 20th century firearms).

Basically, there is no enlightenment among the people, and the Ape Council wants to control all knowledge, for fear that knowledge will lead apes and humans down the same road that destroyed human culture in the distant past.  Without that learning, or knowledge, however, this is a world of superstition and ignorance.

I wish the series did a better job of noting that the "knowledgeable" human race destroyed itself, and that the apes, though ignorant and superstitious, at least have reasons (if not well-thought out ones) for keeping progress at a slow pace.

One quality I admire about “The Surgeon” is that it is unusually even-handed discussing this paradigm. Many episodes of the series feature Galen, Virdon and Burke outsmarting or tricking the dominant apes.  One way they do that is by superior knowledge of history, science, and so on.  Here, however, one important focus is Travin (Michael Strong), a human who is ignorant about blood transfusions.

Travin blames Arna, his own flesh and blood, because of a transfusion that went wrong and killed her brother.  He thinks that her blood is “evil.”  He is unaware that blood donors have to be compatible, and this is something that Burke explains during the course of the story. 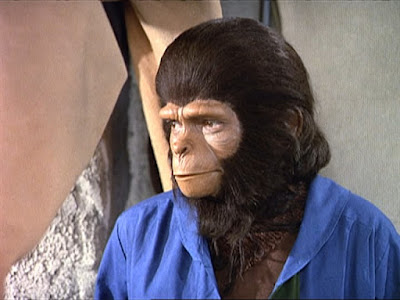 The ape surgeons, including Kira, by contrast, seem informed by the desire to save lives, even a human life.  They permit the use of the human-written text, Principles of Surgery, putting their vocation as physicians above any need to prove or establish racial superiority, in this case.

The Planet of the Apes series works better when there is some nuance to the story-telling; apes who are not bad, and humans are not all good.  This episode lives up to that ideal, so that stereotypes about the apes, and the humans, aren’t comfortably fulfilled. The whole point of a show like this is to remind us that we can’t fail to see people as individuals, because prejudice will grow worse.

In terms of the series’ formula or tropes, one can see how much of the action is repetitive or derivative.

Another crisis, involving Burke this time, necessitates that the fugitives return to Central City again, in “The Interrogation.” And Galen certainly makes a habit of calling on his old friends/romantic interests when it suits him. 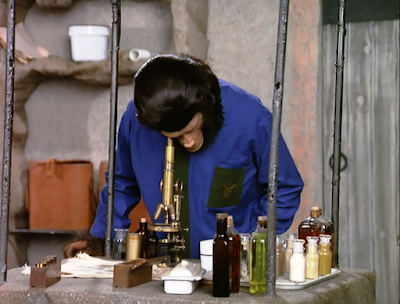 Also, he likes to masquerade as an ape of different occupations, as we see in “The Deception,” “The Tyrant,” and “Up Above the Sky” to name just a few episodes.

“The Surgeon” is a relatively strong story in the limited format of Planet of the Apes, but it exposes again, how the series might have been more intriguing with a more mythology-based approach to storytelling.

Next week, a powerful episode about prejudice: “The Deception.”
at June 08, 2017