Specifically, Urko has been terrorizing local ape prefects via a gambling operation. He challenges these apes of means to a horse race, and then takes half-of-their-wealth, legally, when they lose against his fast horse.

Now, Prefect Barlow (John Hoyt) is the next in line to be conned into a losing horse race, at least until Alan Virdon (Ron Harper) proves that he is the one jockey who can defeat Urko’s horse.

Unfortunately, it is illegal for humans to ride horses on the planet of the apes.

At the same time that this crisis unfolds, Galen is stung by a scorpion, and a local blacksmith’s (Morgan Woodward) son must ride a horse to retrieve the necessary medicine.

Unfortunately, he is captured, and scheduled for execution for his transgression.

Barlow makes a deal with Urko: if his horse wins, the boy will go free… 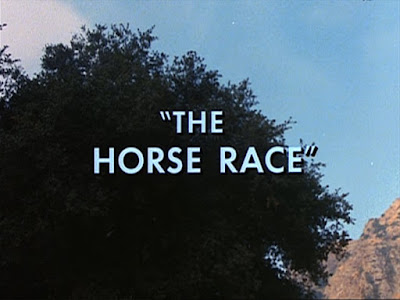 After last week’s clever and allegorical story about race hatred ("The Deception"), Planet of the Apes (1974) falls back to Earth with the potboiler, “The Horse Race.”

Basically, this short-lived TV series has two modes of operation. One mode tells a story, and also -- at the same time -- makes a point or offers commentary about race relations.

The other type of story is basically a time-waster in which humans outsmart the talking apes with their superiority.  "The Horse Race" is the latter type. 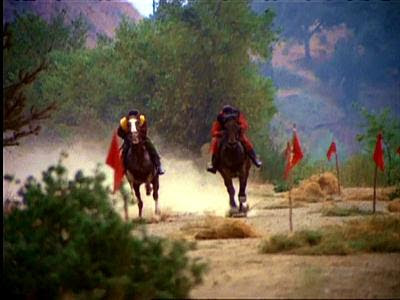 Here, for example, a human being, Alan Virdon, proves that he is the best jockey around, so as to win a horse race, and stick it to Urko.

The problem, of course, is that Virdon is an astronaut, not a jockey, and he no doubt boasts less experience than Urko’s best jockey…who runs this con for a living, basically.

But this story demands that the “superior” humans defeat the apes, and that’s precisely what occurs here. It’s not only predictable, it’s insipid.  Are we such insecure beings that we must believe a person of our time and place must be superior to all others, even if they have superior experience and abilities?  The same notion of 20th century “American Exceptionalism” infects Buck Rogers in the 25th Century (1979-1981), as I frequently point out.

Here, matters are made even worse in terms of the episode's believability.

Virdon is thrown from his steed just before the race starts, and lands in mud.  The mud successfully obscures his identity so that Urko can’t recognize him as a fugitive astronaut during the race. Uh-huh.
It might have been preferable for Urko simply not to recognize Virdon since, as he has said before that all humans look alike to him.  At least then, Virdon’s disguise wouldn’t have been random, or a matter of coincidence, and the series would have continued to study bigotry.  This way, it's just dumb luck that Urko fails to recognize the astronaut. 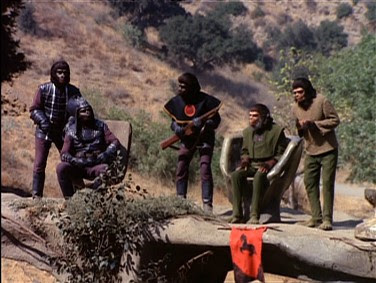 But more to the point, is it at all realistic that the human astronauts should continue to put themselves in such high jeopardy for strangers?

It’s a regurgitation of The Fugitive’s format here, but in this case, matters are truly life and death.  Why would Virdon risk being discovered?

As usual, the series is well-cast, with John Hoyt and Morgan Woodward both fashioning memorable characters in "The Horse Race." But the script (by Booker Bradshaw and David P. Lewis) is largely undistinguished.  I don’t think the question is ever answered here: why do we need to see this story?  How does it contribute to the overall narrative and character development? 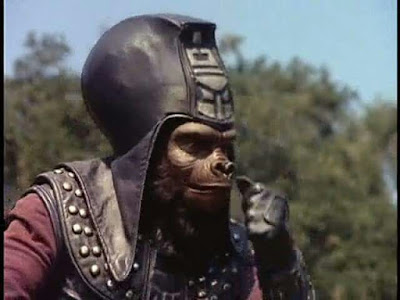 The only answer I come up with involves Urko. This episode proves that he’s corrupt as well as a racist. Yet, alas, this doesn’t jibe well with upcoming stories.

In “The Tyrant,” the human fugitives and Galen go to General Urko in hopes that he will fairly arbitrate a dispute with a corrupt gorilla named Aboro. Why should they expect, after the events of this episode, that Urko would ever treat them fairly?

Although “The Horse Race” was reportedly Ron Harper’s favorite episode of the series, his sentiment is not shared by this author. In fact, I suspect that it is potboiler episodes like this one -- stories that do nothing to move the overall narrative forward -- that alienated prime time audiences in the mid-1970’s.