Planet of the Apes TV Series Blogging: "The Interrogation" (November 15, 1974)

In “The Interrogation,” Burke (James Naughton) is captured by apes, and immediately taken to Central City. There, a young ape scientist, Wanda (Beverly Garland) desires to conduct a brainwashing experiment on him, based on her research from ancient human texts.
Urko (Mark Lenard), by contrast, wants Burke lobotomized at once.

Galen (Roddy McDowall) and Virdon (Ron Harper) must return to Central City to save Burke, but doing so also means that Galen must visit with his estranged family.  Galen’s father, Yulu (Norman Burton), in particular, has not forgiven him for siding with the humans and becoming a fugitive from ape society. 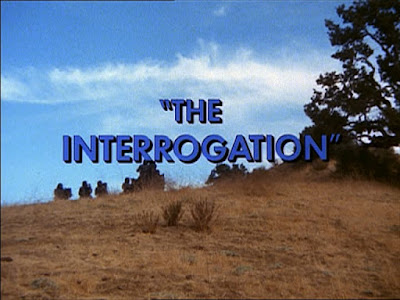 “The Interrogation” is an intriguing and entertaining, if nonetheless formulaic, hour of the 1974 Planet of the Apes series.

Once more, an episode of the series eschews mythology and revolves, instead, around the capture of a fugitive (in this case, Burke), and his rescue by the others (in this case, Virdon, and Galen). At this point, it’s not an inspiring entrance point into an Apes story.  Worse, we know from the beginning how the story will end. 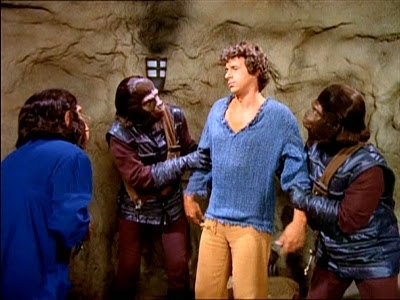 But, some aspects of the tale are indeed fascinating. Wanda, the ape brain-washer (described as a “brilliant young scientist,” by Zaius ) is a fascinating character, and in some ways quite brave and heroic, despite her allegiance to Dr. Zaius.

For instance, Wanda sees no problem in relying on a human-written textbook from before the age of the apes. She doesn't ignore knowledge because of its origination point.  And she practices her brain-washing method -- which involves physical closeness with Burke, a human -- in a courageous way.  I

n the episode, we see Burke in a fantasy world, romantically involved with a young woman, romantically kissing her.  But in reality, Wanda and Burke are kissing one another. This whole approach is surprising and brave, considering that some people might call the relationship “bestiality.”  I remember, very vividly, seeing this episode as part of the movie syndication package in the early '80s, and being shocked at how far the relationship between ape and human progresses. 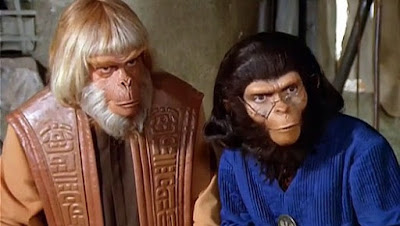 It’s also intriguing, and a call-back to the 1968 motion picture, that Urko recommends the usual course of action for menaces such as Burke: lobotomy. We saw the results of this process in Planet of the Apes (on astronaut Landon), and apparently the technique is practiced on humans in this time (or ape-o-verse) as well.

Another running theme of the series is also revisited in this episode, namely that ape society is one in a dark age of sorts, based entirely on “custom and habit,” according to Galen. In other words, this is a pre-enlightenment society, and in this case, enlightenment may never come because the apes have a crucial secret to protect: human superiority/self-destruction in the distant past. I very much like this aspect of the TV series. Burke and Virdon have landed in a medieval society, and must take on not only the apes, but generations of ignorance and superstition. 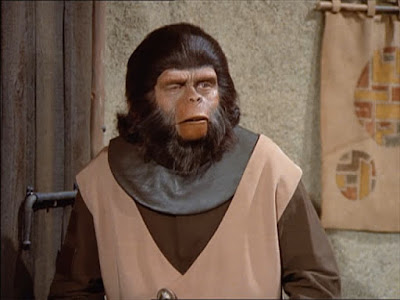 “The Interrogation” is less than stellar in a few important ways, too. We meet Galen’s father, Yalu, here, and it’s a soap opera story-line. The prodigal son returns home, to a disapproving father. Star Trek did it better in "Journey to Babel."  Also, it strikes me as supremely irresponsible that Galen would involve his family in this (Mission: Impossible) caper, given what his parents could lose. But a story of disapproving father and rebellious son has been done many times before, and with more flair than we see in “The Interrogation.”

Also, this seems an appropriate juncture to note that the apes authority has terrible security, even in the big HQ, Central City. In "The Interrogation," a wanted human and fugitive ape break into the office of Dr. Zaius, an important, high official, and are not captured for their trespass. Again, this occurs in the capital city, which is the ape society's seat of power.  Urko is, by definition, the “hapless pursuer” in The Fugitive formula, but he is also incompetent as a security officer.

Despite such drawbacks, “The Interrogation” is a sturdy, well-made entry in this short-lived series.  Much of that sturdiness arises from the creepiness of the scenario (ape and human kissing!) and Beverly Garland’s turn as Wanda, an enlightened ape in a pre-enlightenment society.