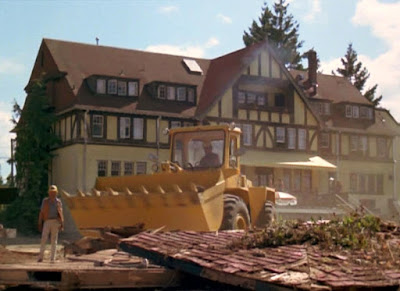 A construction accident at the historic Lakewood Manor -- located in a county described as “the Las Vegas of tomorrow” -- gives way to something even more terrifying: an attack of teeming, angry ants.

Meanwhile, Ethel’s daughter, Valerie (Lynda Day George) is encouraging her mother to sell too, because her husband -- construction foreman Mike Carr (Robert Foxworth) -- has been offered a career opportunity in San Francisco.

The ants, who are defending a subterranean colony, soon attack relentlessly. At first, local authorities think there may be a virus, or poisonous snakes involved in the crisis, but soon the ants mount an all-out assault on the premises. 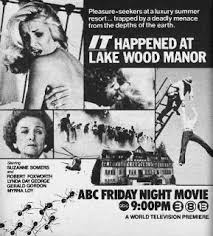 It Happened at Lakewood Manor - also known as Ants -- is a not-very good disaster/horror movie of 1977 vintage.

Actually, the TV-movie is noteworthy from an historical perspective, because it combines two important trends of the day. The first is, indeed, the disaster film format, which was enjoying popularity thanks to cinematic efforts such as Airport: 1975, The Poseidon Adventure (1972), and The Towering Inferno (1974).

It Happened at Lakewood Manor was not alone, either, dramatizing ants as a major threat. Phase IV (1974) and Empire of the Ants (1977) also featured this insect menace prominently.

However, It Happened at Lakewood Manor is not a particularly strong representative for either trend. In fact, for much of its running time, the movie is dull and uninteresting.

In terms of the disaster film format, this TV-movie offers us some familiar character-types. We get the officious naysayer -- who prolongs the crisis -- here played by the great Steve Franken. He actually played a similar role in another disaster film of the same vintage: 1978’s Avalanche. 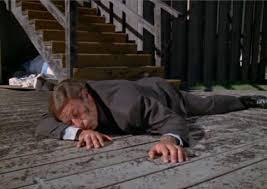 We also have the Elder Stateswoman -- Hollywood royalty of yesteryear -- in a major role. Here, Myrna Loy is the representative of a kinder, gentler Hollywood era. Think, Olivia de Havilland in The Swarm (1979), or Jeanette Nolan in the aforementioned Avalanche. Loy’s character survives the crisis, airlifted away from the ants, and then seems confident she can sell the property, following the ant attack.

And, of course, there’s the nasty, avaricious business man who gets his comeuppance during the crisis. Richard Chamberlain played that role in The Towering Inferno. Gerald Gordon gets the honor here.  Both characters plummet to their deaths. And deservedly so.

As the brief survey reveals, the main characters here are pretty much off-the-shelf in nature, given petty “soap opera” concerns to handle before the real threat -- the ants! -- makes them get their priorities straight. It’s all just time-wasting nonsense until the crisis occurs.

In terms of the revenge of nature trope, the ants here turn hostile because, according to the film, of man.

The dialogue states that “We’re the ones who forced them to live in a toxic world!” It also notes that ants are usually considered peaceful, at least until man “started putting poison in the air.”

This is just silly, at least in the way it is stated.

The movie also falls down -- even compared to the ludicrous The Swarm, however -- in depicting its central threat. More often than not, the ants look like smeared stains on the actors’ skin. 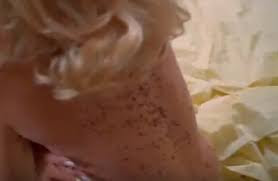 There is also a dreadful special effects shot late in the action in which a blob of something gray -- apparently the ant colony? -- is matted onto the live action scenery. It is a dreadful shot. 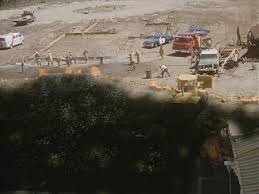 The most ludicrous of imagery is reserved for the film’s finale, however. Lynda Day George and Robert Foxworth sit frozen on a hotel room floor, breathing out of tubes (made from rolled wall-paper), as ants swarm all over them.

A scientist has told them not to breathe, and not to move, so the ants won’t feel threatened by their presence. The imperiled survivors do as they are told, but the visual suggests a weird drug trip rather than a terrifying encounter with nature. Once the fumigation processn begins, and smoke is seen billowing in the room, this connection is even further enhanced. 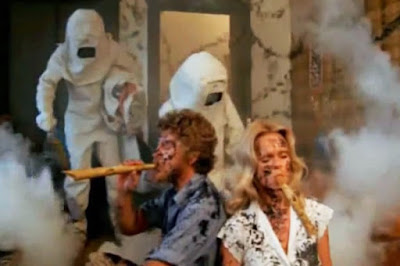 Also unintentionally funny is the sequence in which a helicopter in flight accidentally blows the deadly ants onto bystanders near the hotel. The onlookers all start shaking and patting themselves down until Bernie Casey shows up with a hose to blast off the ants.

Not all the ant sequences are terrible. Suzanne Somers’ death scene is somewhat effective, as we see the ants swarm over her feet and legs while she sleeps. The imagery is definitely creepy crawly, and succeeds in making the viewer feel uncomfortably itchy, if not genuinely menaced.

The movie also features multiple shots of ants circling a sink drain (in the hotel kitchen), and that’s probably a good as metaphor as any for the quality of It Happened at Lakewood Manor.  This is a thoroughly undistinguished, derivative TV movie of its era, without the energy or drive to muster real scares or thrills. It does succeed, however, as a time capsule of a time and place.

Finally, one character in the tele-film notes that everyone has a soft spot, “you just have to find it.”