Who would have guessed that a relatively-unsuccessful genre film released during the Christmas holiday of 1994 would evolve into one of the most popular sci-fi TV franchises of the new millennium?

I'm speaking, of course, about Stargate (1994). The big-budget film, -- which starred Kurt Russell, James Spader and Jaye Davidson (the She Male from The Crying Game ) -- was only a modest success during its original theatrical run...but spawned a TV franchise that ran over a decade, and included at least three titles.

In 1994, Hasbro released a whole line of toys related to the original movie.

The box art work implored would-be buyers to "Travel through the STARGATE and discover a distant galaxy where a doorway to adventure unlocks the mysteries of another world!" 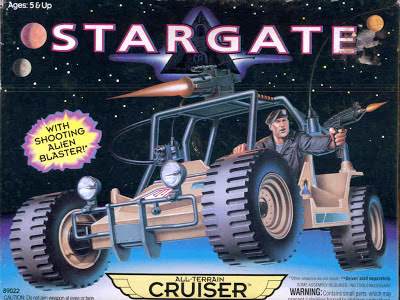 Among the Stargate toys released by Hasbro were an "all terrain cruiser" (replete with "shooting alien blaster!") that Kurt Russell could pilot.

I get a kick out of the box art work, in which Russell is driving this military dune-buggy with one hand while simultaneously firing an uzi with the other hand (and wearing a beret!)

Another interesting Stargate toy was the Mastadge, an alien "beast of burden" (like a cross between a camel and a woolly mammoth.) This happy-go-lucky guy came complete with a "shooting catapult launcher."

Also, this toy was equipped with a "removable shepherd's saddle" and a "customized mastadge transport sled."

A card on the back of the box provided more mega-Mastadgy-type data, informing us that Mastadges "serve the villagers of Nagada," and that they are "loyal animals capable of withstanding the brutal sandstorms of planet Abydos. They can each reach speeds of up to 35 mph over the planet's desert landscape, making them an excellent form of transportation."

A third toy was the "winged glider" (which I don't own, alas...) but which was sold with "firing missile launchers." 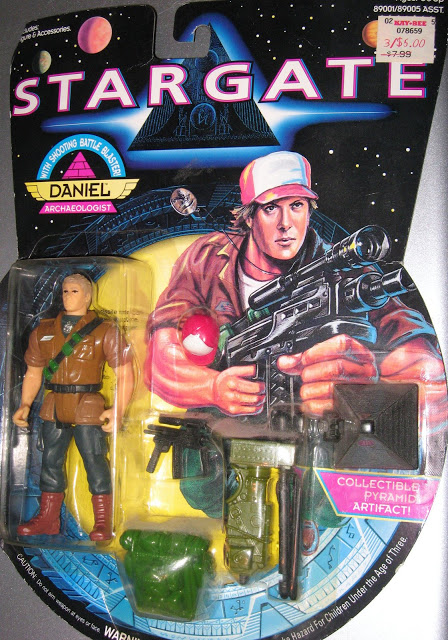 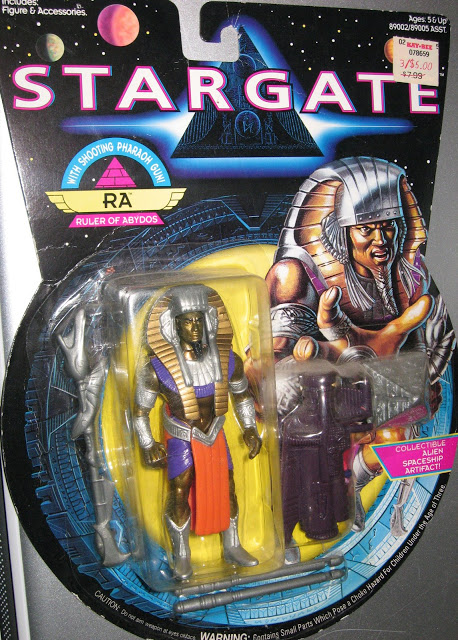 Also, on the back of the toy boxes were these funny little questions which could only be answered if you decoded the hieroglyphs. One such question: "In which country are the pyramids located?"

Young buyers were enticed to "collect all 8 figure cards to complete the hieroglyphic alphabet."

Email ThisBlogThis!Share to TwitterShare to FacebookShare to Pinterest
Labels: Action Figures of the Week, Stargate