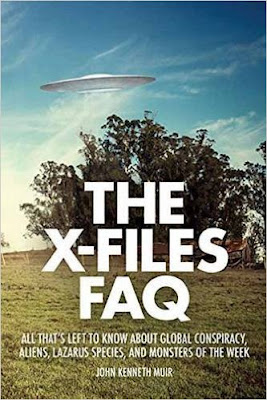 Today, I want to make note of the release of my newest book.

So what will you find inside the book?

Well, it opens with a remarkable and heartfelt foreword by series creator Chris Carter.

Mr. Carter wrote this lovely piece on the eve of shooting the second episode of the six episode series revival, to begin airing in January 2016. He reflects on The X-Files journey at this juncture -- more than two decades in -- and discusses the people who have, alongside him, made the journey such a remarkable and memorable one.

The book also features chapters devoted to the many paranormal cult-TV series that aired before The X-Files, and those that followed in its pop culture wake in the 1990s.

But the bulk of this book focuses on what The X-Files means, what it says about our world and the culture that gave rise to it. My introduction discusses the series' historical context, and it compares the period of Pax Americana (the 1990s and the introduction of the Internet) to the Age of Pax Britannica a hundred years earlier (and the advent of globalism).

Both ages witnessed rapid development in science and technology (namely communications technology), and were believed to be ages of peace and prosperity. Pax Britannica gave us the Gothic imaginings of Bram Stoker and Mary Shelley -- Dracular and Frankenstein -- while Pax Americana gave us The X-Files.

In some remarkable ways, The X-Files is thus a reinvention, for our age, of Gothic tropes and philosophies. In Mulder and Scully we see the battle between romanticism (Mulder, and the need for monsters), and enlightenment or rationality (Scully).

The X-Files FAQ also features chapters devoted to explorations of the series' entries on faith and spirituality, ethnocentrism and xenophobia, adolescence, Americana, and science and technology.

Other chapters focus on the series' frequent recurring "monsters," meaning serial killers, lazarus species (creatures from prehistory, awakening in our age...), and so on.

Across the book, I also name and sketch out all the players in the conspiracy, and note how the heroes, conspirators, villains and allies fit in, structurally, with the Monomyth narrative, or the hero's journey. Some characters function as oracles, others serve as gate-keepers, and some are loki-like mischief makers.

I hope that you will consider purchasing my latest book and supporting my work in print (which, let's face it, funds this blog, and allows me to continue working on it on a daily basis).

So I hope you will share my love, personal and philosophical, as a fan and and as a critic, for The X-Files.

The X-Files FAQ is now available for purchase at Amazon.com, here.
at September 06, 2015