The Films of 1975: The Ultimate Warrior 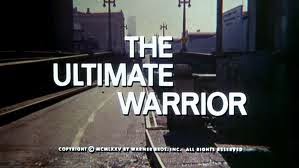 “It’s interesting what becomes valuable to us when almost everything is taken away,” one character muses in The Ultimate Warrior (1975), a violent action film that heavily forecasts The Road Warrior (1982), Cyborg (1989) and other films of the post-apocalyptic sub-genre.

In this case, it is Yul Brynner rather than Mel Gibson or Jean Claude Van Damme who plays a warrior of the wasteland, one who must protect the remnants -- and indeed the future -- of human civilization.

As in the case of the other films name-checked above, there’s a powerful Western vibe or overlay to The Ultimate Warrior.  This is the story of a Clint Eastwood-like stranger who arrives at the City, and either saves it from injustice, or induces it to experience a rebirth.

It’s fascinating how the hero/stranger in such tales is always an outsider to the community or village at large, isn’t it?

The myth of the hero on a white horse arriving to clean up town -- and then leave it for the better -- is a deeply entrenched one in American culture. So much so that it still exists today in political campaigns.  Everyone (on both sides of the aisle) wants to be cast as the heroic outsider riding into corrupt/failed Washington D.C. to clean it up.

The Ultimate Warrior -- directed by Robert Clouse -- certainly puts an interesting spin on this old archetype, recognizing in this case that the City will fall, but that mankind can survive nonetheless. The hero’s responsibility is not, then, to the City, in this case, but to the very future of the species.  The film uses as symbols for that future both plant seeds, and a human fetus, carried in the abdomen of quite possibly the world’s last mother.

The future world of 2012 (!) as depicted viscerally in The Ultimate Warrior is one of starvation and desperation, scarcity and shortages. There is no gasoline, no medicine, and no hope. The Baron’s (Max Von Sydow) community suffers from a plague of “fatalism,” according to the film’s dialogue.

In terms of historical context, it is easy to see why the apocalypse takes this form. The film arises, like No Blade of Grass (1970) or Z.P.G. (Zero Population Growth) (1972) from an age in which resource shortages, pollution and over-population looked like the trifecta of impending doomsdays, the three-headed bullet that had our name on it. Similarly, the country was still careening from the morale-sucking failures of the Vietnam War and fall-out from the Watergate Scandal.  “Fatalism,” in those days, wasn’t the purview of only sci-fi films.

The film’s great virtue is its sense that mankind will endure. That fatalism can be outlived. The final scene -- set outside the confines of the de-humanized City -- promises a re-birth of hope, and an end to the fatalism that reduced man to selfish barbarian.

But of course, such catharsis can only arise after a particular brutal confrontation between Brynner and William Smith -- local warlord -- in a subway car.

That’s as it should be, however, since this is an action film. The Ultimate Warrior is vastly underrated in terms of its action, story, and value to the genre, but even worse, it often gets no credit for imagining the savagery of the post-apocalyptic world that filmmakers and critics would later associate with the Mad Max saga.  It’s a film that deserves a second look, even forty years later. 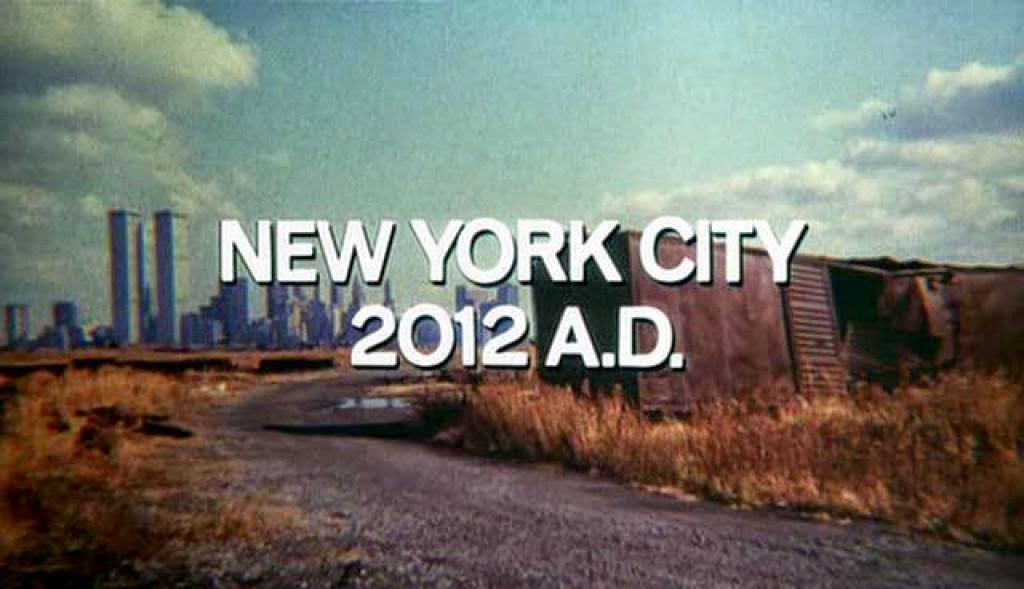 In the year 2012, the civilized world has collapsed into anarchy due to famine. The Baron (Max Von Sydow) -- the leader of small community of survivors in New York City --realizes that his people will not survive long when faced with vile scavengers like the evil Carrot (William Smith) and his men.

Thus, the Baron recruits a soldier of fortune named Carson (Yul Brynner) to act as guardian to his people.

But the Baron has another motive for bringing the warrior into the fold. He recognizes the inevitable; that there is no future in city life.  Specifically, The Baron wants to send his pregnant daughter, Melinda (Joanna Miles) to safety in North Carolina along with a batch of specially-engineered seeds that can grow despite the famine, and re-start the cycle of life.

The Baron tasks Carson with the care of his daughter and the seeds during the journey, but Carrot does everything in his power to stop the mission.

The Baron’s people are none-too-happy either, to learn that their leader has determined that their lives and futures are expendable. 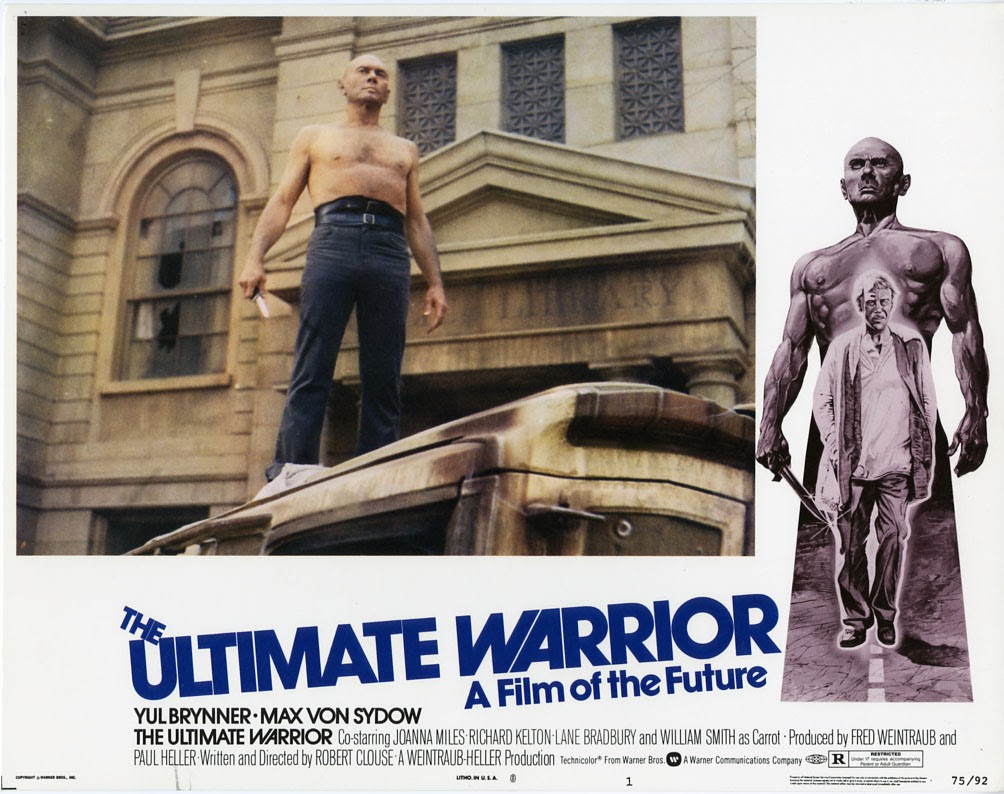 The Ultimate Warrior’s depiction of its dark future world remains quite powerful. The city looks like a vast junkyard, and the Baron’s community lives on a city block barricaded on all sides. The entrance is accessible only through a parked-bus, and inside the community we see small gardens, wind mills (for energy production), and a community pantry running very low on provisions.

Impressively, The Ultimate Warrior considers that in a new world order like this one, new laws will be necessary, and the film reveals how even the best society’s -- like the one established by the Baron -- must operate on draconian law.  There’s nothing to waste, nothing to squander, and yet the laws are so harsh that some essential sense of humanity is sacrificed.

For example, one citizen in the compound is accused of stealing a tomato, and forced to endure cruel justice.  The Baron declares “Give him to the street people” and the offender is cast-out into the urban jungle.  The Baron pays for his own trespasses as well.  After sending away his daughter, Carson, and the seeds, he stays behind, and his own people beat him to death for selling them out. This sequence seems indicative of the proverb that those who live by the sword shall die by the sword.  The Baron showed no mercy to offenders, and is, finally, shown no mercy, himself.
A real sense of human savagery permeates The Ultimate Warrior, and one sequence involves the desperate mother and father of a small baby venturing out into the “wilderness” of New York to acquire powdered milk for their infant.  A less frank, less honest film would have had them survive; would have had the hero rescue them.  In this case, Carson is too late to help the family, and barely escapes with his own life. The fate of the baby is pretty grim too, an indication that the City is running out of tomorrows.

The Ultimate Warriors’ last act leaves behind the terror of the City, as Melinda and Carson (carrying the seeds), flee the metropolis through the subway system, Carrot and his men in pursuit.  In this section of the film, the tension is especially high because The Baron -- Melinda’s father -- has actually given explicit instructions that Carson is to consider the fate of the seeds ahead of the fate of Melinda and her child.

That’s how desperate things have gotten for the human race.  Family ties are now less important that a life-giving crop. When Melinda goes into labor, with Carrot’s men in pursuit, the film reaches its pinnacle of anxiety, since one wonders what decision Carson will ultimately make. It’s a tough choice, and one I don’t envy.

Carson chooses the morality of the old world, interestingly, and stays with the pregnant mother.  He thus risks everything, but maintains his soul.  It’s a fair trade, given the film’s outcome.  As the titular “ultimate warrior,” Carson dispatches Carrot and his men with great aplomb, violence and blood-shed. The final set-piece in the subway (wherein Carson must chop off his own hand to kill Carrot) is gruesome in the extreme, but the final shots of Carson, Melinda and her baby reaching the picturesque beaches of North Carolina provide the film its final punctuation, a visual and emotional catharsis that makes the whole journey worthwhile. 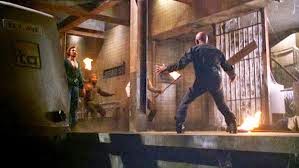 For my money, the cutthroat No Blade of Grass still takes the cake as the bluntest, nastiest slice of post-apocalyptic life in the 1970s cinema, but The Ultimate Warrior absolutely points the way to the genre’s future. The film re-purposes old Western myths and tropes but doesn’t candy-coat the grim realities its characters encounter.  While it is not, perhaps the “ultimate” post-apocalyptic film, The Ultimate Warrior is nonetheless a really fine piece of work, and the grandfather, perhaps, of The Road Warrior.
at April 16, 2015

Email ThisBlogThis!Share to TwitterShare to FacebookShare to Pinterest
Labels: 1975, cult-movie review, post-apocalypse, The Films of 1975