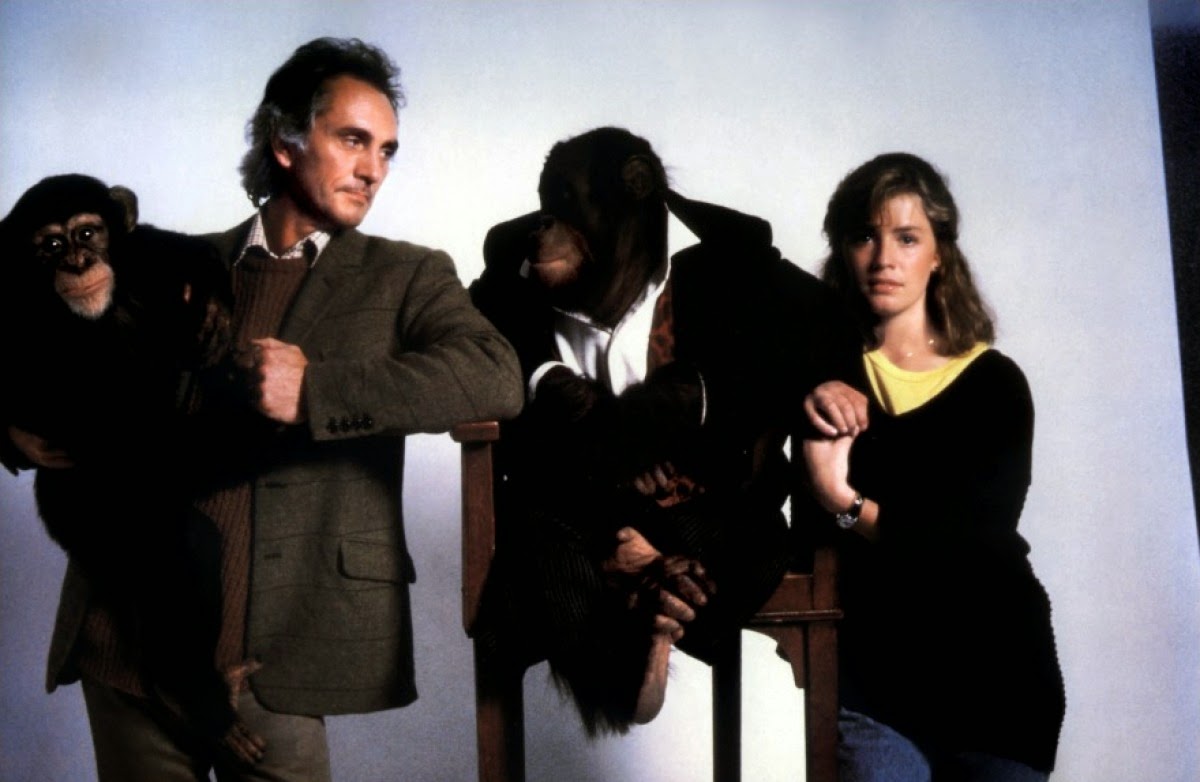 Mr. Franklin was very generous with his time, and this interview occurred on November 20, 2005.

Some -- though not all -- of this material, appeared in the published book, but I thought it would be nice, today, to share the back-and-forth as it appeared originally, only cleaned up for purposes of clarity

The topic moves from Link to horror movies of the eighties in general. 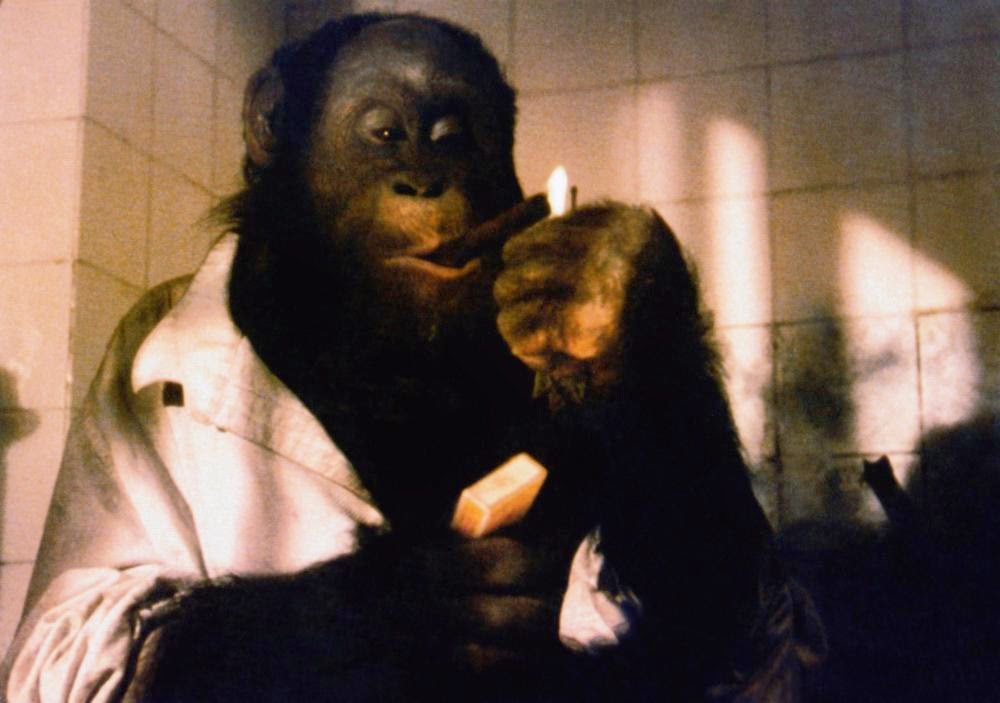 Muir: Describe the genesis of Link.

Richard Franklin: My landlord (DP Tom Ackerman) on a spec trip in 1979 showed me the story and I optioned it. It was to have been my next film after Road Games.

Muir: What was it about this material that stimulated you as a filmmaker?

Richard Franklin: The opening line in the synopsis: “Someone pulled the head off of Mrs. Murphy’s cat.” The idea that an animal could be acting like a man acting like an animal. An ironic spin on Michael Myers and the whole genre. Then learning from Jane Goodall that there was some truth to this [idea].

Muir: Phillip gives Jane a set of rules to obey. Was part of the fun of this film giving viewers these rules and then having characters break them?

Muir: Was there a long period of rehearsal on this film to get the actors and crew familiar with working with apes?

Muir: How long was the shoot? 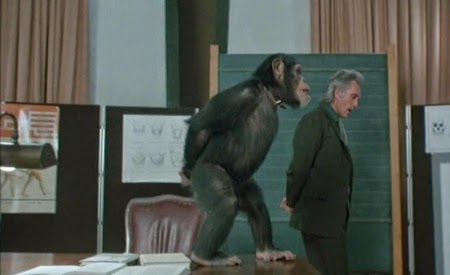 Muir: How did Link and the other apes take direction?

Richard Franklin: They could do short (15 – 20 second) behaviors. And didn’t argue. But [they] lost interest quickly.

Muir: Were there delays?

Richard Franklin: It was a grindingly difficult shoot. But not because of the apes. I found the English crew very slow and difficult.

Muir: How did Elisabeth Shue do with her ape co-stars?

Richard Franklin: I believe she loved them.

Muir: The final chase in the movie is electrifying. How long did it take to stage and execute?

Richard Franklin: You mean the siege in the house? Maybe a week. And thank you. No one’s ever said that before.

Muir: Had you storyboarded it all out?

Richard Franklin: Yes. Without that we’d have been lost.  Link has something like three times the number of shots of any of my other movies.

Muir: I notice there are many long shots there. Your fluid camera and choice of shots make it clear where everyone is in relationship to each other.

Richard Franklin. Absolutely! And thanks for noticing. Maybe I’m a neo-classicist.

Muir: What do you think the film ultimately says about man/ape relationships?

Richard Franklin: That we are alike – and different. That civilization (political correctness and the like) is a thin veneer. Yet that 1% genetic difference makes a HUGE difference.

Muir: What happened regarding the release of the film?

Richard Franklin: EMI went belly up. Cannon inherited the film and those guys were absolute bozos.

Muir: I didn’t find it until a home video release, and I suspect the film wasn’t released theatrically in the States.

Richard Franklin: It had a small theatrical airing.

Muir: What was the problem, if you recall? Why did this film get lost and is it still lost, in a sense?

Richard Franklin: Inept distribution. It happens a lot – particularly to me. Look at Visitors (2003).

Muir: What do you think a student of films should understand about your sensibilities as a filmmaker?

Richard Franklin: I’m a neo-classicist. [I] believe traditional mise-en-scene can’t be beaten. [I] hate “wobbly-cam” (aping home videos) as it draws attention to itself and gets in the way of emotion (cf John Ford’s idea of “invisible technique,” which you’ll see more of in my later work like Hotel Sorrento/Sorrento Beach [1995].)

Muir: Do you think young directors working today still understand film grammar and how to use it?

Muir: Which of your films in the 1980s best express your viewpoint as a filmmaker?

Muir: If you had to choose one to film to show a class, which one would it be?

Richard Franklin: I just showed the new [Psycho II] DVD to a class.

Muir: What do you think of the trend of slasher films in the 1980s? Was it good for horror, or do you think it was a blind alley?

Richard Franklin: Maybe good for horror, but not necessarily “the thriller.” This genre once included North by Northwest (1959), but psychological suspense like Gaslight (1944) or The Cat and the Canary (1939) has sort of disappeared in favour of grue.  To me, the best screen murder ever is Nancy’s in Lean’s Oliver Twist (1948), and the scariest scene ever is the Indian raid in The Searchers (1956).

Muir: Do you have any favorite horror films from the decade?

Richard Franklin: Any suggestions? I like Halloween (1978), but that was the seventies.

Richard Franklin: Brian is drawn to different values in Hitchcock’s work from those that attract me.

Richard Franklin: Some fantastic moments, but a bit labored. Kubrick (late in his career) underestimated his audience.

(At this point, my questions were all answered.)

Muir: Thanks again for your time!”

Richard Franklin: Hope my ideas do not cause offence. By all means come back for more…”
at January 08, 2015