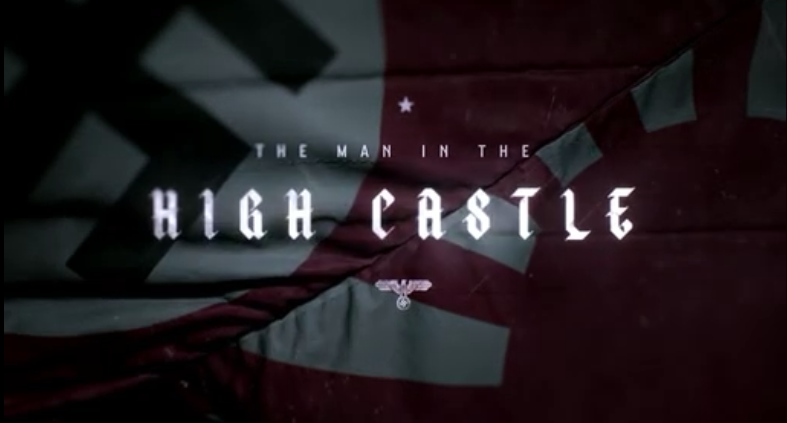 (Here there be spoilers...proceed at your own risk.)

The Man in the High Castle (2015) is a new and impressive pilot from X-Files writer Frank Spotnitz and director Ridley Scott. It is being featured as part of Amazon's second annual pilot season.

The filmmakers have worked with great skill and artistry to adapt the Hugo Award-winning 1962 novel by Philip K. Dick to a visual format. Dick’s story has been termed an “alternate history” science fiction story, meaning it ponders what might happen had history gone differently.

In this case, the Axis Power won World War II, and have since carved up America. Imperial Japan now controls the West Coast, and Nazi Germany controls the East Coast, with a “neutral zone” in the mid-west separating fiefdoms.

The series is set in 1962, some dozen or so years after the end of the war. 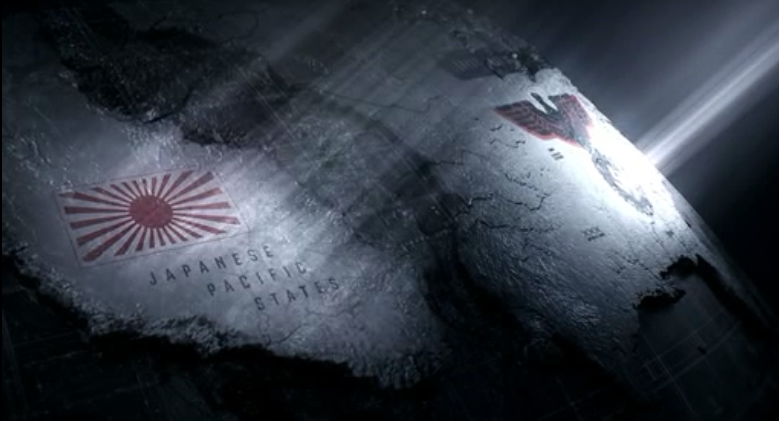 The Man in the High Castle pilot focuses primarily on two characters, one living in Japanese San Francisco, the other in Nazi-run New York, as they make separate, unplanned pilgrimages to Canon City, in the Neutral Zone.

Making the journey from the west is Julianna Crain (Alexa Davalos).

Making it from the east is Joe Blake (Luke Kleintank).

Independently of each other as well, each character carries notable contraband: a film reel titled “The Grasshopper Lies Heavy,” which showcases documentary footage of the West -- FDR, and Winston Churchill -- winning World War II for the Allies.

Since this did not happen, apparently, in Joe and Julianna’s particular reality, that means that the world -- reality itself -- is false in some way not yet understood.

The pilot episode commences in terrifying fashion, as images of American sovereignty and power are overcome by the relentless march of the Axis Powers.

Scored to a morose, creepy version of “Edelweiss,” from The Sound of Music (1959), the introductory montage is unforgettable.  The funereal tone makes viewers aware that they have entered a world without freedom and liberty, where the face of Lady Liberty has fallen under a shroud of darkness. It’s an effective and ominous note to start out on, and the opening montage is quite powerful.

From there, the narrative moves crisply and cleanly o introduce this “brave new world” of the 1960s.  Rock Hudson and June Allyson are still making movies for Hollywood, but America is not the same country any more.

Joe Blake seeks to join the Resistance movement in New York, while Julianna sees her sister Trudy gunned down in cold blood by the Japanese regime for her role in the resistance. Both characters take up the same odyssey from opposite sides of the country, and by pilot’s end, meet one another.

And, of course, there’s a final twist that will leave you gasping. 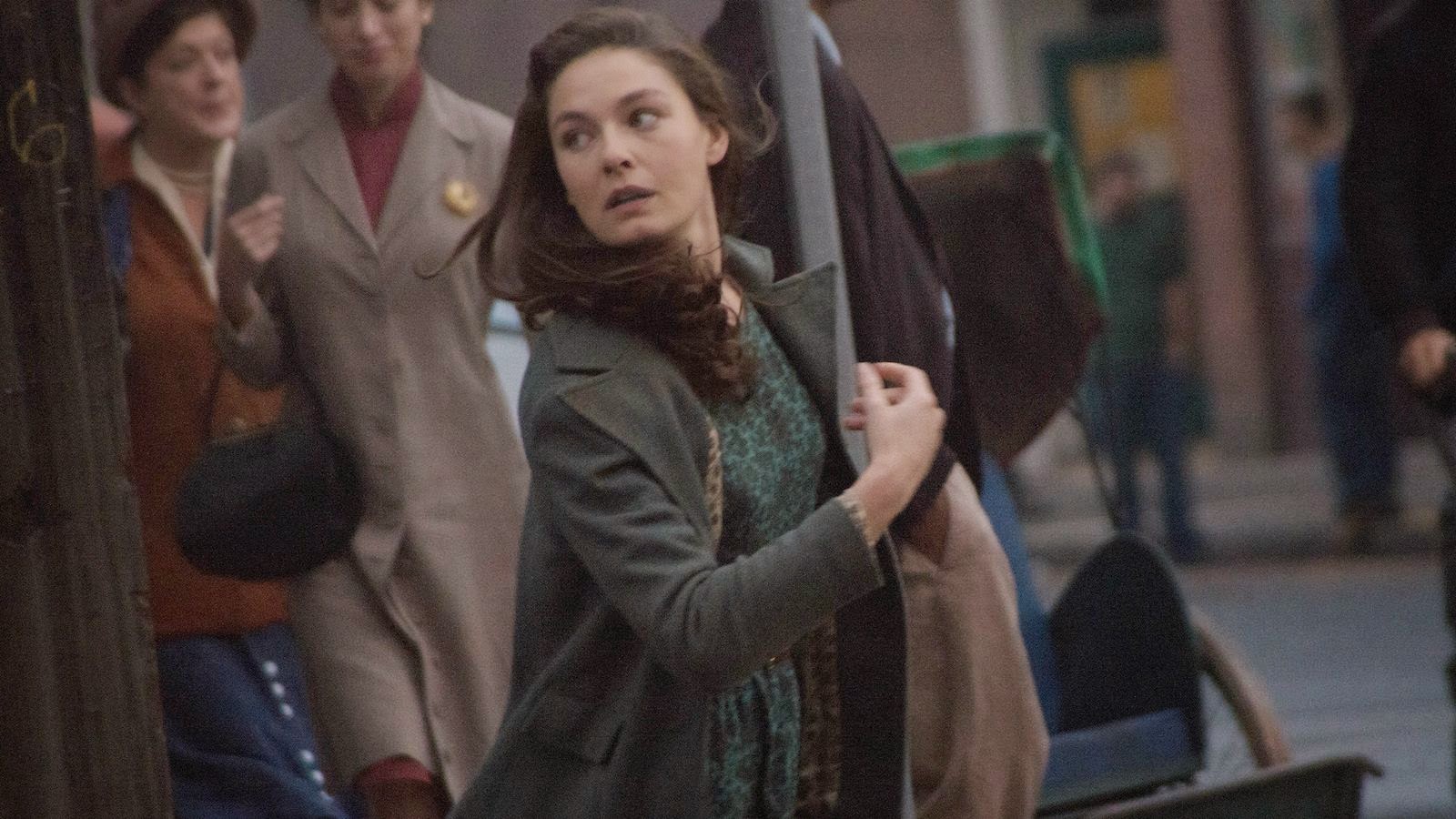 The pilot also contends with the specter of a new Cold War.

Hitler is aged and dying in this alternate reality, and his would-be successors (Goebbels, Himmler, and Rommel) are scrambling for power. This means trouble for Japan, because many in the Nazi hierarchy believe that the U.S. should not have been partitioned. Instead, it should have been taken for Germany. Accordingly, nuclear weapons stand ready to bomb the Japanese island as well as San Francisco.  It’s possible that the world will plunge into an all-out war…again.

Some characters in the drama believe that they can use the I-Ching, an ancient divination text, to determine what shape the future will take.

In the original novel by Dick, The Grasshopper Lies Heavy was a book, not a film, but I liked this update and change because TV is a visual art-form, and the existence of a documentary film establishes better than words on a page would that the world featured in the series could be false, or perhaps, merely one world in a massive multi-verse.

If a series should develop, the exact nature and origin of this book will no doubt be a major plot line.  How did get to this universe?  Is this universe real?  Is it a game?  A simulation?  A parallel reality?

A clever and intelligent writer like Spotnitz can spin the narrative in any tricky direction, hinting at multiple possibilities, and keeping us on our toes for many seasons. Certainly, the pilot episode is well-crafted, particularly in its attention to small details. 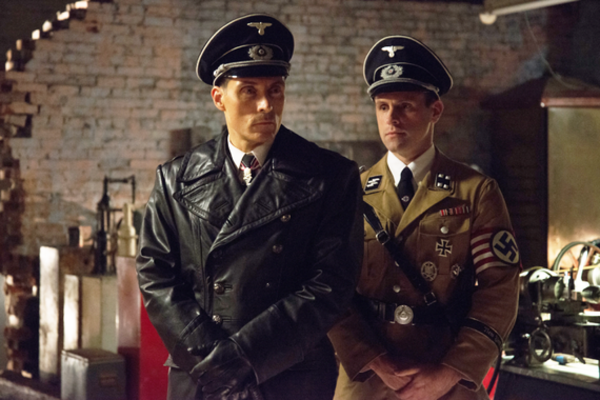 For example, there’s one scene of utter horror that occurs while Joe is on the road. He stops his truck, and speaks to a police-man.

Joe is perplexed, and the policeman reports that a hospital is nearby. And Tuesday is the day of the week that said hospital burns cripples, the terminally ill, and other “drags on the state.”

Blake is eating a sandwich when this revelation occurs. Watch him closely as he regards his meal. His unguarded response (or lack of one) is a clue about his character's nature. But this little throwaway moment captures the terror and inhumanity of the Axis Powers more powerfully than could a scene involving Nazi soldiers and large scale combat. We understand immediately how this America is different from ours.

The Man in the High Castle introduces a number of good concepts that could well serve a long-term series, including the belief that “fate is fluid” and that “destiny is in the hands of man.”  It would be incredibly intriguing to see this idea play out, across a Japanese/Nazi Cold War, and across a dedicated resistance movement.

Already, The Man in The High Castle is extraordinary, imaginative television, dominated by strong performances, crisp writing and surprisingly good production values. On that last front, there’s a shot of Nazi Time Square here that will make your jaw drop. 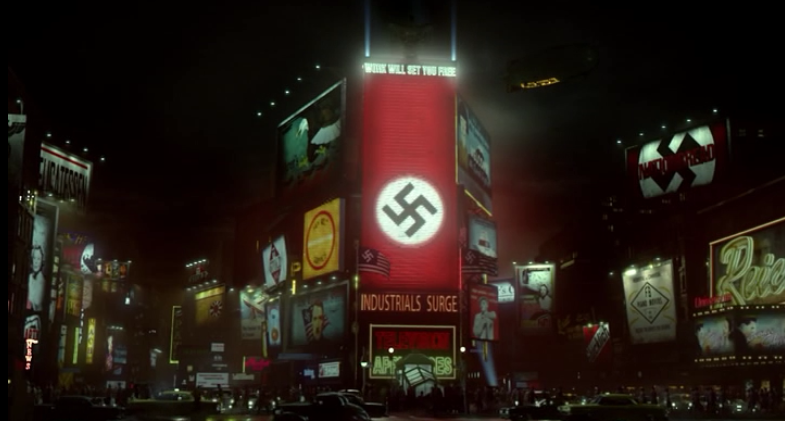 Let's hope this one makes the cut.  I'm still in mourning over Amazon's treatment of The After. Let's hope it doesn't make the same mistake twice. The Man in the High Castle could very well be the Game of Thrones for the alternate reality sub-genre...if Amazon doesn't kill it in the cradle, that is.

Email ThisBlogThis!Share to TwitterShare to FacebookShare to Pinterest
Labels: Amazon.com, Frank Spotnitz, Ridley Scott, The Man in the High Castle