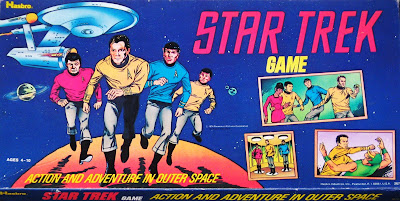 Some five years after the original TV series ended and five years before The Motion Picture (1979) premiered, Hasbro released this memorable and unique Star Trek board game (for ages 4 - 10).

Decorated with art reminiscent of both the Gold Key comic book series and the CBS animated series of the 1970s, this Star Trek "action and adventure in outer space" game comes with a large fold-out  playing board, four colored pieces (representing the Enterprise crew), and a "double" spinner that permits your starship to travel under either impulse or warp drives.  The spinner is probably the coolest aspect of the game. 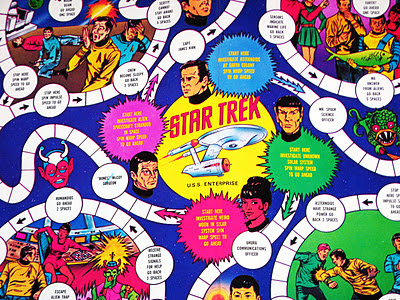 On the large, colorful board, there are four separate adventures to experience, one for Kirk, one for Spock one for "Bones" and one for Lt. Uhura.  And the individual adventures are rather strange, too.  In one adventure, Mr. Sulu is called Mr. "Sula" and the word "asteroids" is repeatedly spelled as "asternoids."

I don't know about you, but I'd hate to have a bad case of asternoids...

Anyway, in one adventure, you land on a spot where "the crew becomes sleepy" (!) and the player must go back three spaces.  Turns out the sleepiness is being caused not by MSG, but by "moonbeams."

Another adventure on the board involves an oddball mystery: "who has been fishing on Earth?"   Turns out its aliens; apparently without a fishing license...

The whole thing, story-wise, is incredibly odd and not very Star Trekkian in detail.  Obviously, it's designed for the very young, but still, kids are smart; they know when details are wrong.

On the plus side, the original series-styled art work remains very intriguing and if nothing else, the game is abundantly colorful.  I'd say the Hasbro Star Trek game is worth having just for the warp and impulse spinner.
at May 15, 2013