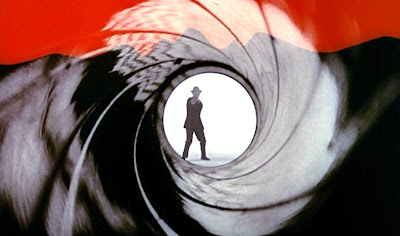 The James Bond films are widely renowned for their spectacular pre-title action sequences.   Often, these elaborate sequences feature an independent narrative only loosely connected to the film proper, or even ones unconnected all-together (Octopussy [1983], for example).

The express purpose of the pre-title sequence, in fact, sometimes seems to be to out-do and one-up the previous film’s climax.   Accordingly, these starting moments are often dominated by stunts and incredible action, sometimes even record-breakers.

The upshot of this approach is that James Bond fans know -- all too well -- that when the lights go down, the action starts…immediately.

So, how to rate a 007 pre-titles sequence?  I submit that the best ones tell a complete story, show us something we haven’t seen before, begin the movie with a tremendous jolt of adrenaline, and capture -- in some concise (yet dazzling) way -- the James Bond aesthetic, some canny mixture of action, sex, and humor. 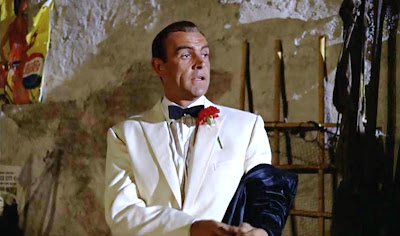 Although some modern viewers might consider this pre-titles sequence simple, basic, or even ordinary today, I believe it remains the prototype for all the ones that come later.  Set in an unnamed Latin-American country -- where Bond (Sean Connery) is on a mission to destroy a drug laboratory -- this Goldfinger opener reminds us and re-establishes for us every quality that we love about 007, and about the Bond film series.

The scene boasts a sense of humor, since Bond wears a hat that looks like a sea-gull as he emerges from the water in a wet suit.  It features a nod to his impeccable sense of style, since the agent wears a white dinner jacket and bow-tie under his scuba gear, and it even features a dynamic Ken Adam-designed villain headquarters.

The icing on the cake is the beautiful dancer Bond romances, and the knock-down, drag-out fight with a cold-blooded killer in her dressing room.  In one of the film’s many visually dazzling moments, Bond becomes aware of the assassin by seeing his approach reflected in his lover’s eye.  After Bond electrocutes the villain, he even lays a quip on us.  “Shocking…”

Action, romance and humor combine perfectly in a scene less than five-minutes in duration.  Goldfinger hits every important note of the Bond film mystique, and is the standard for all the films that follow. 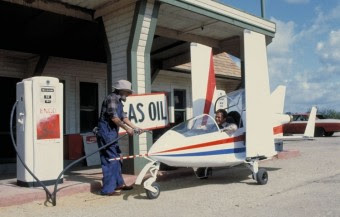 This pre-title sequence finds James Bond (Roger Moore) on a mission in Cuba to destroy an experimental air-craft tracking/weapons system.  The mission fails rather egregiously, but thanks to the help of a lovely agent, Bianca (Tina Hudson), he escapes from captivity, boards a mini-jet, and -- with the unintentional help of the Cuban air-force-- completes his task.  As the sequence ends, the mini-jet runs out of gas, and Bond conveniently locates a gas station…

This sequence features one of the all-time best Bond vehicles, a tiny jet known as an Acrostar Micro-jet.  It is so tiny, in fact, that it can fit comfortably inside a standard horse trailer, and roll into a lane at your average gas station.  And boy can it fly...  The stunts involving the plane are stunning, and final punch-line, “Fill her up please” is perfect, especially as delivered by the smiling Moore.

Again, we get the beautiful woman, the deadly crisis, and an explosion of an enemy headquarters (in this case an airplane hanger), but the addition of the distinctive Acrostar makes all the old standards feel new, and vibrant.

Roger Moore’s last Bond film features a lot of ups and downs.  One moment it feels grim and brooding, and the next it is reveling in campy humor.  Although this schizophrenia is also revealed in the pre-title sequence, the sequence is nonetheless one of the finest in the series in terms of the stunt work and musical scoring (by John Barry).

The scene opens in Siberia as Bond (Moore again) finds the corpse of 003, and recovers an important micro-chip.  In short order, however, he comes under attack from a team of Russian soldiers.  The soldiers come at 007 on skis, on jet-skis, and in a helicopter.

Bond navigates his way through the icy terrain -- and over a body of water -- to reach a submarine disguised as an iceberg.  But he doesn’t leave the scene before serving as a one-man wrecking crew, killing his enemies, and taking down the helicopter with a flare gun.

Scored in lugubrious but memorable fashion, this pre-title sequence is veritable carnage candy, with Bond taking down scores of opponents, and resourceful “surfing” across the water to reach freedom.

I know the purists hate these moments, but the sequence cuts briefly to the Beach Boys’ “California Girls” on the soundtrack when Bond surfs on one ski.  Sure it’s campy, but the audience I saw it with roared with laughter, and the stunts themselves are incredible.  Today, this would probably all be accomplished with CGI, but it’s important to remember that a stunt man actually accomplished these amazing feats, skiing down a sheer cliff face, and across a real river.

Lapses into (audience-approved) corn humor aside, View to a Kill opens with tremendous gravity and spectacular action.

This was the film that introduced Timothy Dalton as James Bond, after seven films with the getting long-in-the-tooth Roger Moore.  Accordingly, this pre-title sequence serves as our introduction to the younger, more serious, and much more athletic incarnation of 007.

The setting for that introduction is an M16 training exercise over Gibraltar involving the 00s. We watch -- without yet seeing Bond -- as these agents sky-dive out of the back of the plane, and come down the treacherous side of the mountain.  The camera-work during the jump creates a genuine sense of exhilaration.

Before long, an assassin is after the unsuspecting agents, executing a KGB plan called Smert Spionam (“Death to Spies.”) As the first double-o dies, we get our first look at the wolfish new James Bond, a reaction shot revealing the gravity and intensity with which he weighs this danger.  Before long, we’re getting jump scares (watch out for that a monkey!), and a destructive car chase on a winding road, and a fist-fight as Bond battles it out with his opponent.  All the while, we get to marvel at  something we haven't seen in a while: a young James Bond (in his thirties), running, leaping, jumping and fighting. Not since the early days of Sean Connery have we had such a physically aggressive, physically capable hero, and The Living Daylights establishes these "dangerous" qualities brilliantly in the pre-title sequence.

In fact, The Living Daylights even plays lightly with the idea of a "serious" Bond.  The agent lands on a yacht, grabs a phone, calls headquarters, and is absolutely all-business.   Only in the last second does a smile creep across his face as he decides to spend a little time with a bored (but appreciative…) lady.   Yep, new face, new vigor…but same Bond. 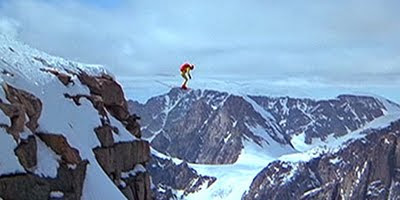 This Bond pre-title sequence features one of the most jaw-dropping stunts ever to grace the silver screen, followed up by one of the best visual punch-lines of the entire Bond film series.

Here, Bond (Moore) is pursued by Soviet agents, when he is forced to ski, essentially, off a mountain.  He makes that jump (still wearing skis…) with no digital trickery or rear projection tomfoolery.  The camera follows the jump as he goes down, down and down -- in real life some 3,000 feet -- for an impossibly long time.  Finally, a parachute goes up; a parachute emblazoned with the Union Jack symbol.

It’s a perfect movie moment, and a perfect opening to a James Bond film.  The jump was performed by stuntman Rick Sylvester at Mount Asgard in Canada, supervised by editor John Glen, and shot by cinematographer Alan Hume and a ledge camera man.

This early moment in the film isn’t merely stunning, but literally jaw-dropping.  Movie history -- and James Bond  history -- was made.
at September 14, 2012 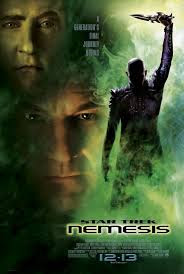