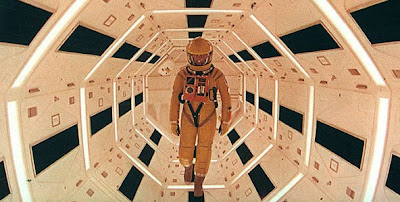 J.D. Lafrance, a reader, and the terrific movie blogger at Radiator Heaven contributes his list of top ten science fiction films, below:

"J.D. here from Radiator Heaven. I saw your post about ranking top ten fave SF films. Man, tough choices, but I think I narrowed it down to 10:

J.D.'s list is great, and I'm happy to see a Star Trek film crack the top ten.  It makes sense it should be Wrath of Khan, I agree, in part because of the literary mirrors that Khan and Kirk/Spock represent: Moby Dick (revenge) vs. A Tale of Two Cities (friendship, sacrifice).

I'm also thrilled to see a Body Snatchers film on the list, though I've always *slightly* preferred "my" generation's Pod People; the 1978 film with Donald Sutherland and Leonard Nimoy

Don't forget to send me your top ten list at Muirbusiness@yahoo.com