Following the amazing success of Land of the Lost (1974 – 1977), Sid and Marty Krofft created another Saturday morning live-action series: The Lost Saucer (1975).

The Lost Saucer is the story of normal 1970's kids Jerry (Jarrod Johnson) and his babysitter, Alice (Alice Playten).

One night, they are visited by a flying saucer, and whisked away on an adventure. Aboard the highly-advanced craft are two androids, Fi (Ruth Buzzi) and Fum (Jim Nabors). These friendly androids hail from the planet ZR-3 in the year 2369, and reveal that their ship not only travels through space, but across time as well. 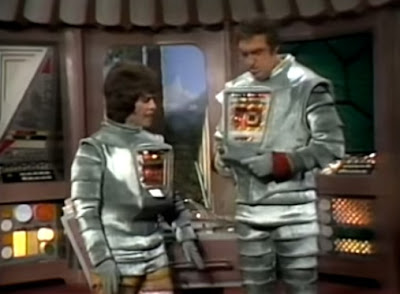 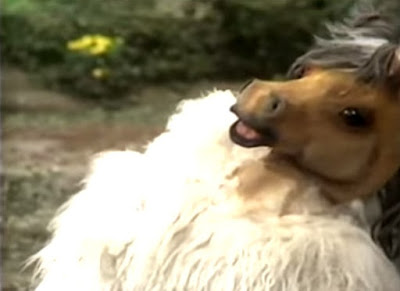 Alice and Jerry also meet Fi and Fum’s other ship-mate, “The Dorse” (Larry Larsen), a “bio-genetically engineered” creature with the head of a horse and the body of a shaggy dog.

On their first interplanetary journey, Fi and Fum experience difficulties.  The time vortex is accidentally opened, and the “Year-o-meter” is broken, sending the ship to some distant, far off time.

Alice and Jerry just want to return home, but instead, they are forced to reckon with one cosmic and temporal adventure after another. 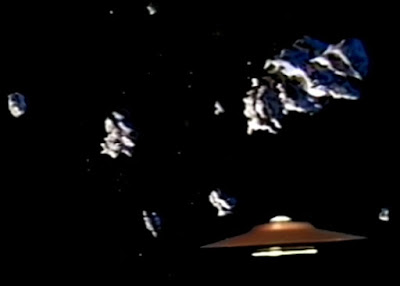 You can see the genre antecedents or inspirations immediately in this format.

We have the lost travelers trying to get home, similar to some extent, to the crew of the Jupiter 2.

We have advanced time travelers stealing away “companions” and then having difficulty returning them to the right epoch.  And the saucer’s main control column and control room lay-out, even, in some sense, seems to resemble the TARDIS. 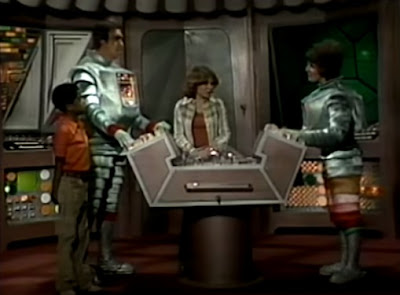 And from Star Trek, The Lost Saucer takes a sense of social commentary. Even though this is a silly, slapstick Saturday morning series, each episode tries to convey some imaginative and culturally relevant point. The stories, for all their goofiness -- like the notorious Chickephant episodes -- ape the Gulliver’s Travels aspect of Trek; that each new culture is actually a commentary on our own.

In this story, the saucer is hurled into the distant future.

While Fi and Fum attempt to repair the saucer, Alice and Jerry go out to explore a fabulous metropolis and find that all the human inhabitants are covered in masks and thick suits, and go by numbers, not names. 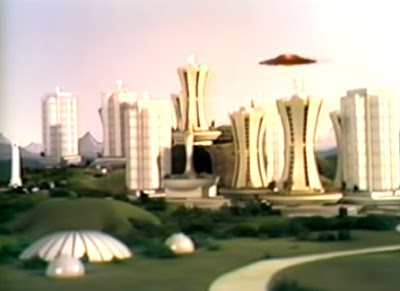 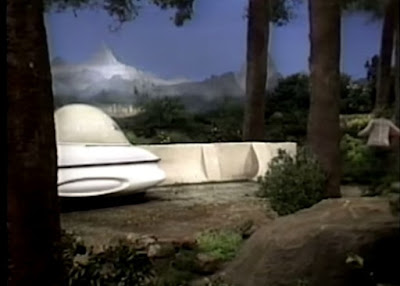 Indeed, the Earth kids are promptly arrested by police for being in public with no numbers, and held for trial.  Their judge is a giant, movable computer with no face, and no mercy either.

Jerry and Alice attempt to explain that where they come from, people have names, not numbers. Their captors reply that without a number, the “government” can’t “keep track” of people. 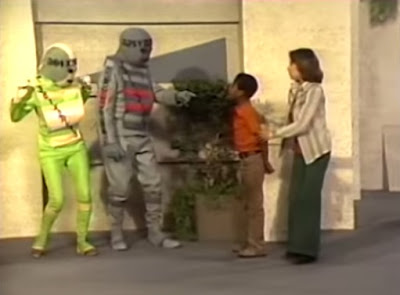 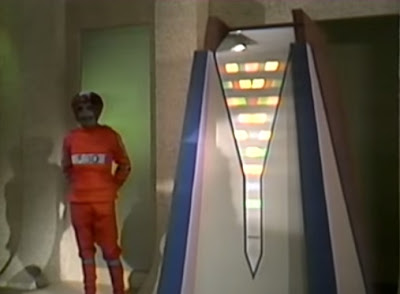 The fear expressed here, clearly (in the immediate post-Watergate, post-Vietnam Era) is of the State becoming a dehumanizing influence, one that fails to acknowledge the individuality and humanity of its citizens.

After Fi and Fum rescue Alice and Jerry (using “air-jets”), Fum reflects that it is truly awful “when numbers become more important than people.”  That may sound like an on-the-nose “lesson,” but it goes by quickly, and the episode’s visuals convey the story effectively.  The sets and costumes are inventive, and it is fascinating to imagine a world in which you can’t show your face, or identify someone by name.

Everyone must be the same and treated the same, or the State intervenes. It’s heady stuff for a Saturday morning series. It's relevant to today's context too, strangely enough. We live in a world of death by drones, government surveillance, and so on, so the idea of the State controlling many aspects of life still resonates.

Of course, there’s also the “shticky” aspect of the series.  Fi and Fum are comic characters through-and-through.  They say things like “watch your tape deck” instead of “watch your mouth,” and are generally clowns. They bumble their way through the adventure, and yet are also depicted as happy, positive figures in the drama. They make mistakes, but they’re good-hearted.  The Lost Saucer arises from a time when heroes and other characters didn’t all have to be broken, broody and angsty. They could just be…goofy. 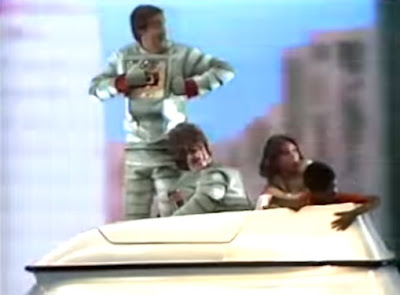 In terminology and technology, The Lost Saucer has certainly aged a great deal in forty years. Fi and Fum spew paper print-outs for example, and discuss the aforementioned tape decks. But the production values, at least for this episode, are pretty good given the time and the limited budget.

This episode features a clutch of alien costumes, the judge robot, bubble cars, a future city miniature, and other nice touches.  One chase uses rear-projection, and so on.

The Lost Saucer is not officially available in any format at present, though you can find this and several other episodes available on YouTube.  I'll be reviewing the episodes that are posted there, in the coming weeks, to glean a further sense of the series for readers here.
at September 30, 2017