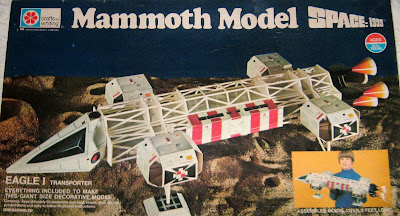 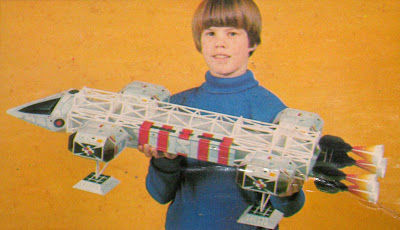 When I was a kid in the 1970s I was fascinated by all things having to do with Space:1999's trademark Eagle spacecraft.  I had a model kit of the ship from Airfix, a huge toy of the Eagle (from Mattel) and more.

And in 1976, ATV licensed "Crafts by Whiting" (a Milton Bradley Company) to create another variation on the famous Brian Johnson design: a so-called "mammoth model" for ages 10 to 16.

The assembled Eagle model was "over 3 feet long."

On the side of the mammoth model box, intrepid young modelers were reminded "It's as easy as one, two, three."  First "position cut and glue straw parts over pattern sheet."  Then "press out and assemble die-cut printed cardboard pieces."  And finally "combine straw structures and die cut assemblies to complete spacecraft."

Today, I own one of these Mammoth Model Space: 1999 Eagle Transporter in its box, but have never, ever attempted to build it. The directions say easy as one-two-three, but I just don't believe them. Looking at the un-assembled kit, it looks like the most complex thing imaginable. I'm afraid I would just ruin it.

So for now, and the future, I'm just going to enjoy the box art of this unique Eagle Transporter "Mammoth Model," and remember that I have an un-built Eagle at the ready should the fancy ever strike...
at September 13, 2017