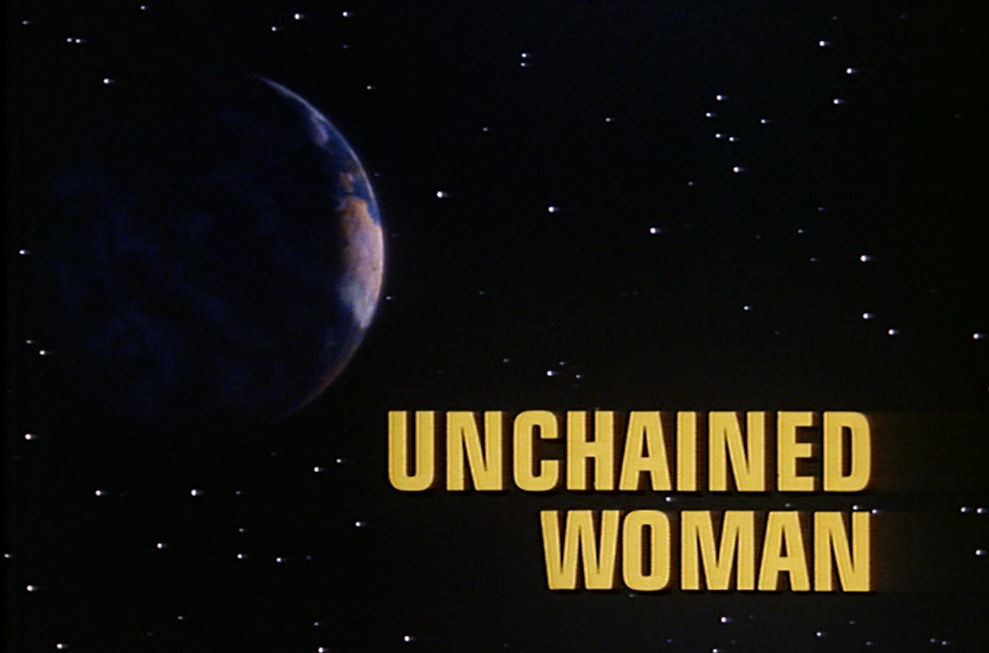 The man out of time is tasked with breaking a prisoner -- Jen Burton (Jamie Lee Curtis) -- out of an inescapable, subterranean prison on the moon Zeta 3 so she can testify against her boyfriend, Mal Pantera (Michael Delano), who has been ambushing Directorate shipping lanes.

Complicating the mission, Buck must also contend with a relentless and invincible android prison guard whom he has nicknamed Hugo (Walter Hunt).

After escaping from the prison with Jen, Buck has to not only escape Hugo’s pursuit (and deal with hungry sand squids...) and meet Wilma (Erin Gray) at a rendezvous point. He must also deal with an unseen menace: Earth ambassador Warwick (Robert Cornthwaite), who is secretly allied with Pantera. 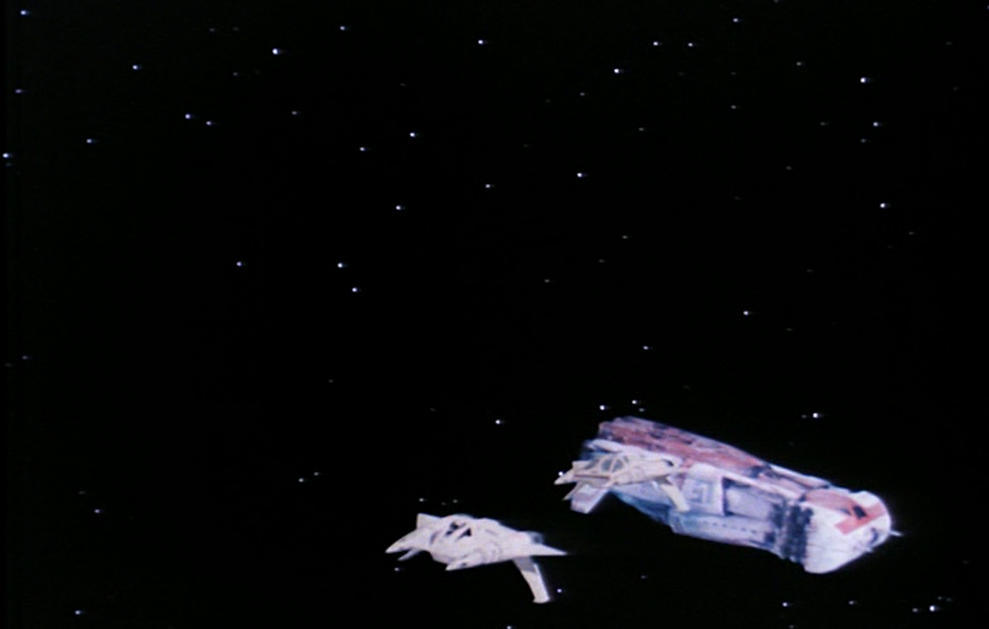 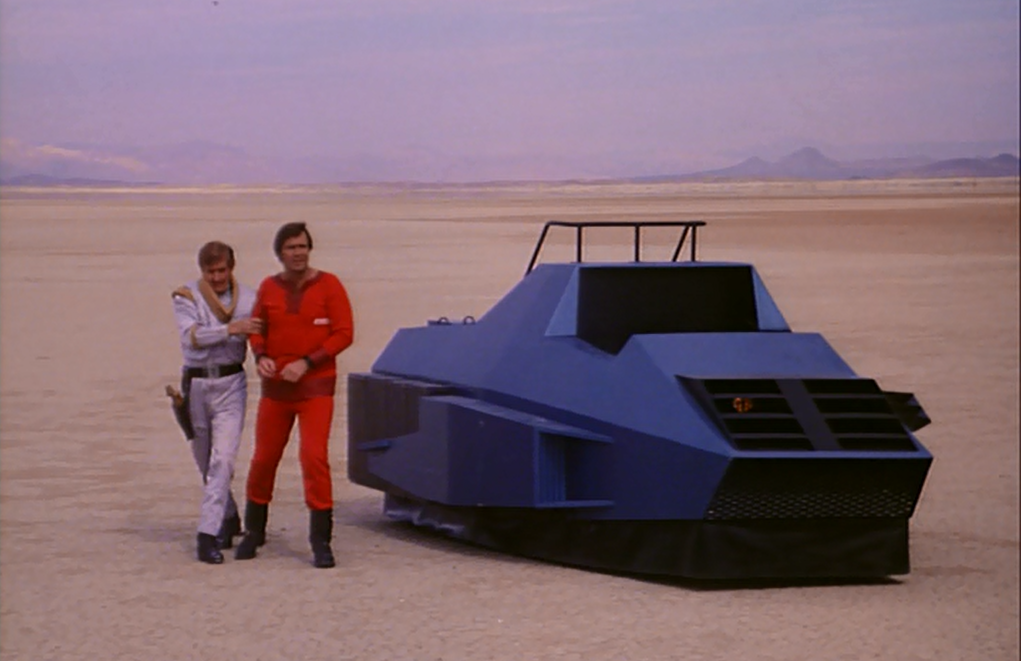 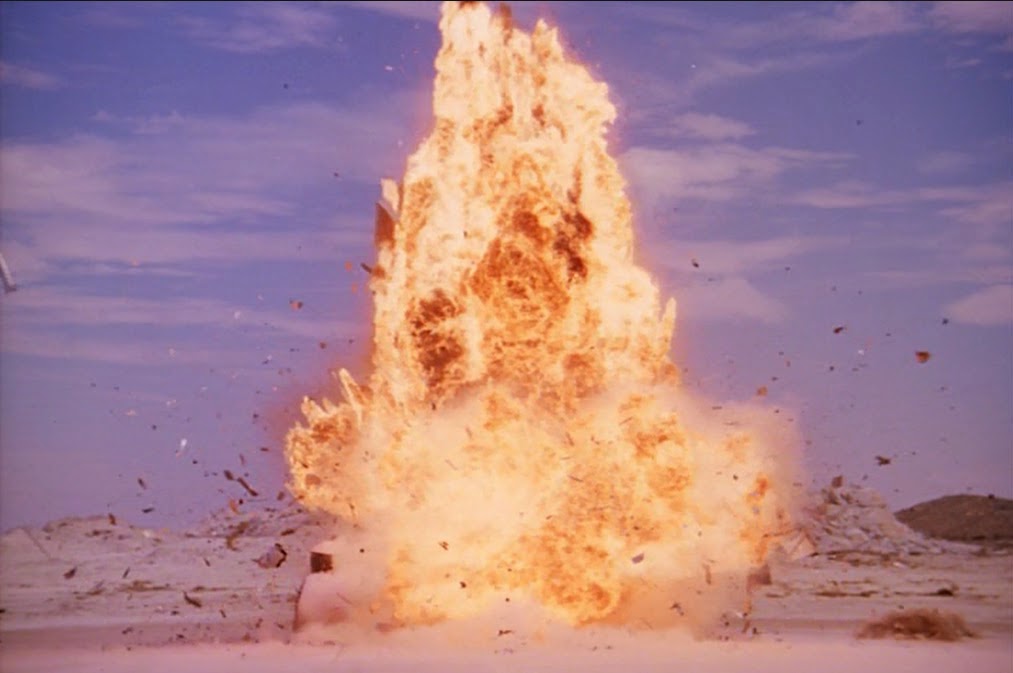 Watching "Unchained Woman" today, it is clear that the android Hugo is a sort of science fiction missing link between Yul Brynner’s Gunslinger in Westworld (1973) and Arnie’s cyborg from the future in The Terminator (1984). This relentless, incredibly strong individual drives much of the episode’s action and even provides “Unchained Woman” its sting-in-the-tail/tale conclusion.

Although the mission ends successfully, Buck’s android nemesis is still “alive,” still hunting his escaped wards.  He is never going to give up. Ever. And in fact, the machine is referenced in a later episode ("A Blast for Buck.") 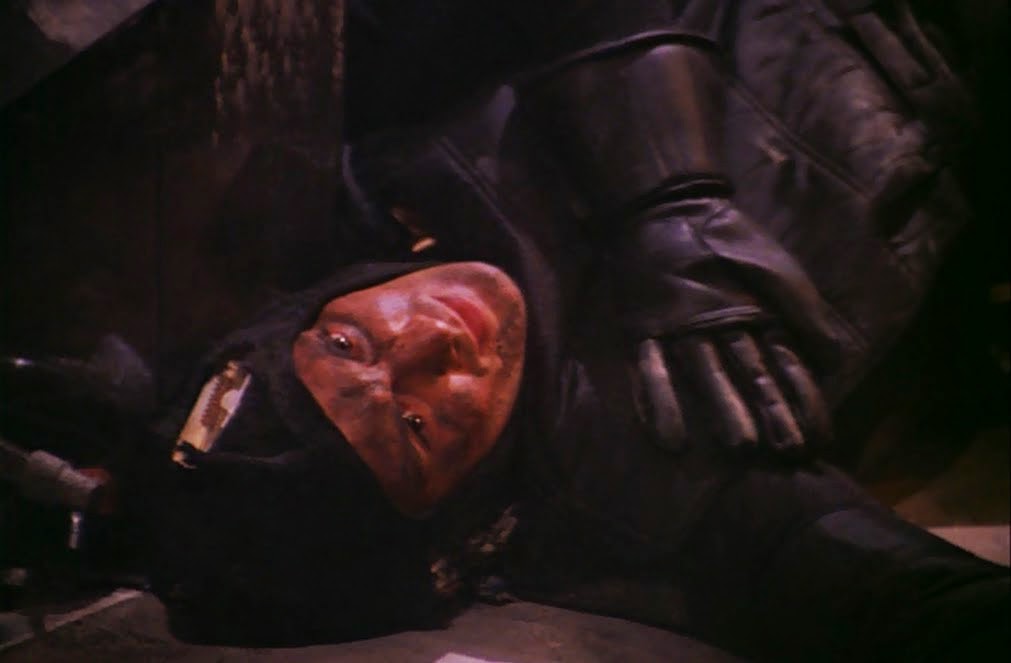 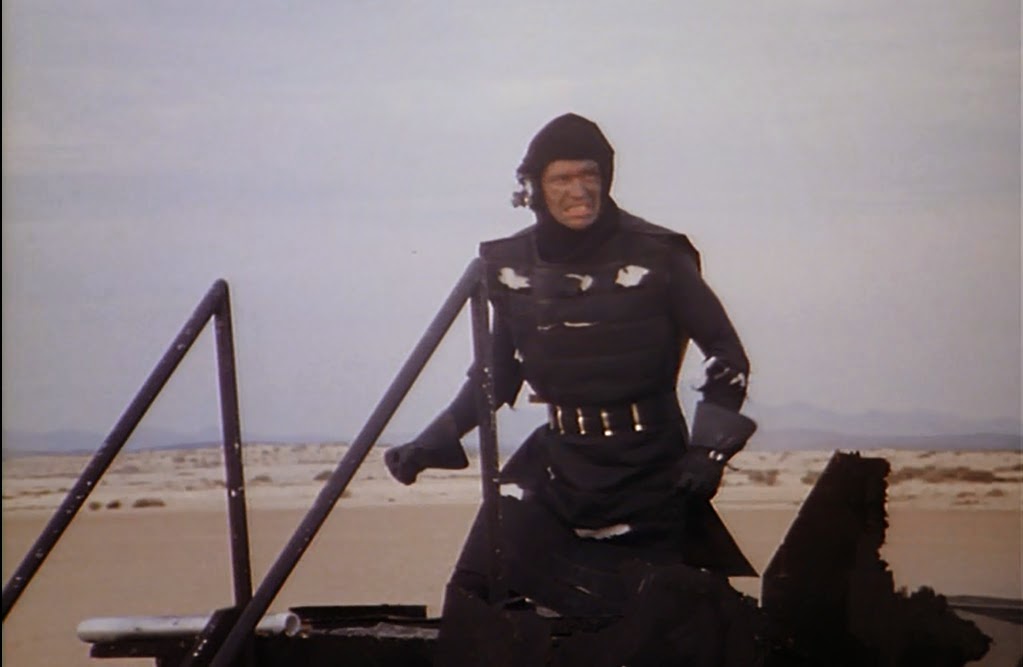 This is a funny happenstance, in terms of the pop culture, because guest star Jamie Lee Curtis is famous, of course, for being pursued by an unstoppable villain of another stripe, Halloween’s (1978) Michael Myers.

Here, Jen believes she is finally free, but the episode cuts back to Hugo on Zeta's surface, his hand twitching, thus signifying the fact that the nightmare continues. 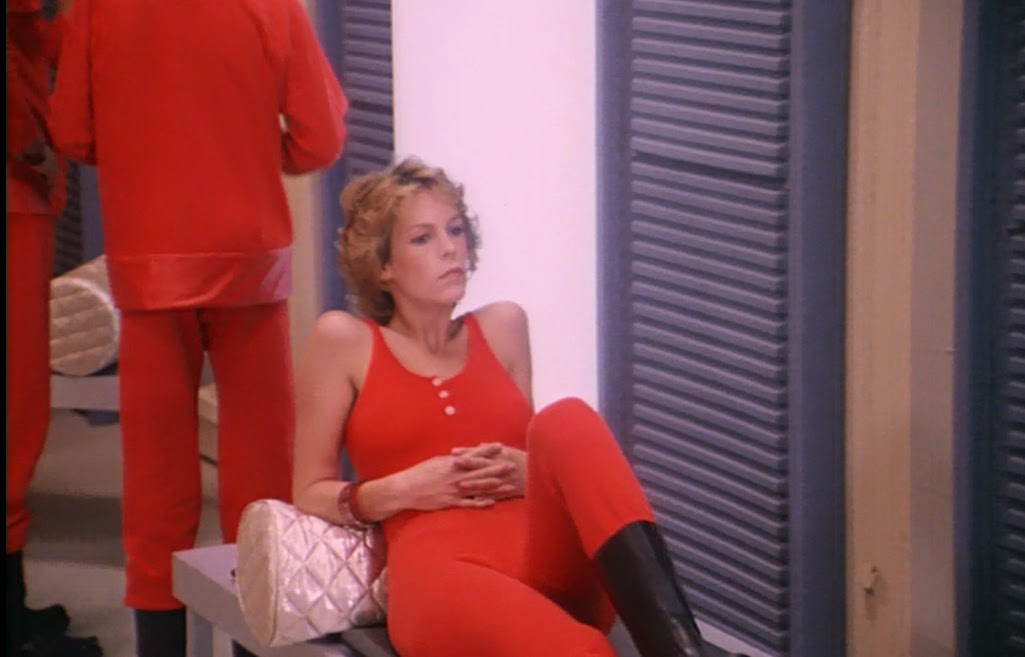 What remains so intriguing about “Unchained Woman” (and much of Buck Rogers’ first season, as well) is that it focuses on a crime or “caper” story.  The prison break-out story, for example, is a genre trope, seen on such programs as The A-Team and the tongue-in-cheek The Lone Gunmen (2000). The story itself is familiar, even old, but the writers for Buck Rogers cleverly adapt all the 20th century clichés to the 25th century setting thus making them memorable, and in some sense even fresh.

Here, we get an underground prison on Zeta 3 (two-hundred feet beneath the surface and carved “out of bedrock”), an explosive medallion, android prison guards, a decontamination chamber, and prison identification bracelets. These trappings are inventive enough to make the story feel fresh. The episode's director, Dick Lowry, creates a lot of tension from the fact that the prison is inescapable, and Buck's only method of getting out, the aforementioned medallion, is torn from his neck and thrown in a garbage bin. 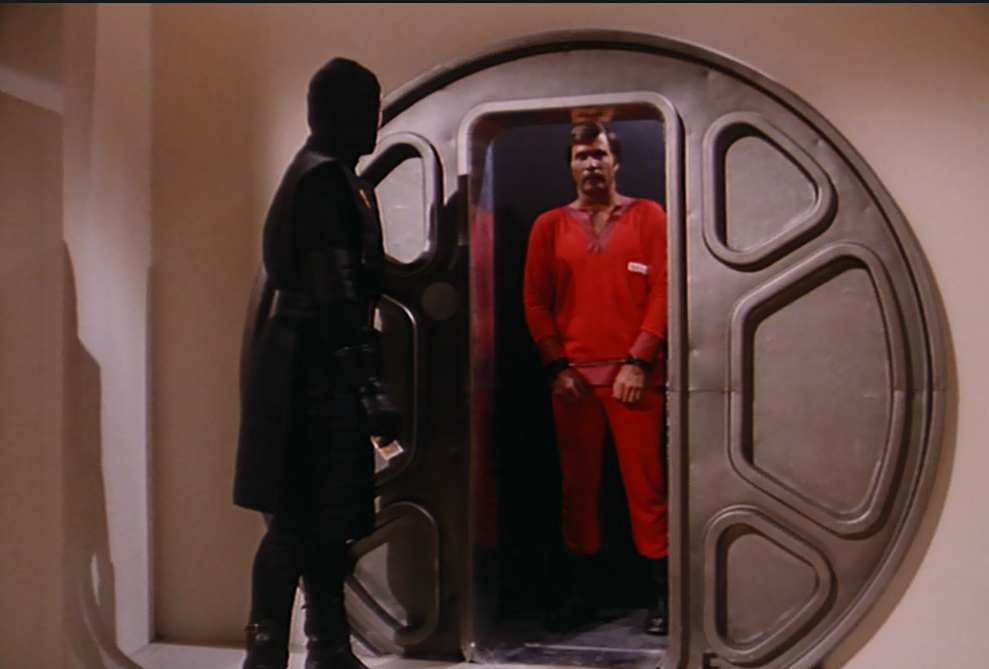 When you couple these futuristic trappings with Buck’s sense of humor and quips, “Unchained Woman” emerges as quite the entertaining romp. For example, here he notes, with apparent appreciation, that prisons have gone “co-ed” since his era.  At another juncture, he considers an android’s law-and-order “motto” (“On Zeta, they do things right…”) and suggests it would make a good bumper sticker. Gil Gerard makes such a good series lead because he can alternate readily between sincerity and humor without either emotion seeming forced. "Unchained Woman" puts those talents to good use.

Every sci-fi TV series possesses its own unique alchemy. Buck’s is ably represented by this episode: crime-related “caper” tales in which Buck goes undercover, helps someone, and  cracks wise along the way, all while contending with the technological "miracles" of a de-humanized future age.

The nice thing about this formula is that it can be varied to be more serious (like the brilliant “Plot to Kill a City,”) more horrific (“Space Vampire”) or even a bit more on the comedic side (“Cosmic Whiz Kid.”)

I still remember watching “Unchained Woman” for the first time, and worrying about how Buck was going to stop an unstoppable android. The episode’s cleverness comes from the fact that --in the final analysis -- he doesn't accomplish the impossible. The androids still functions, and is still out there, in search of his prey. 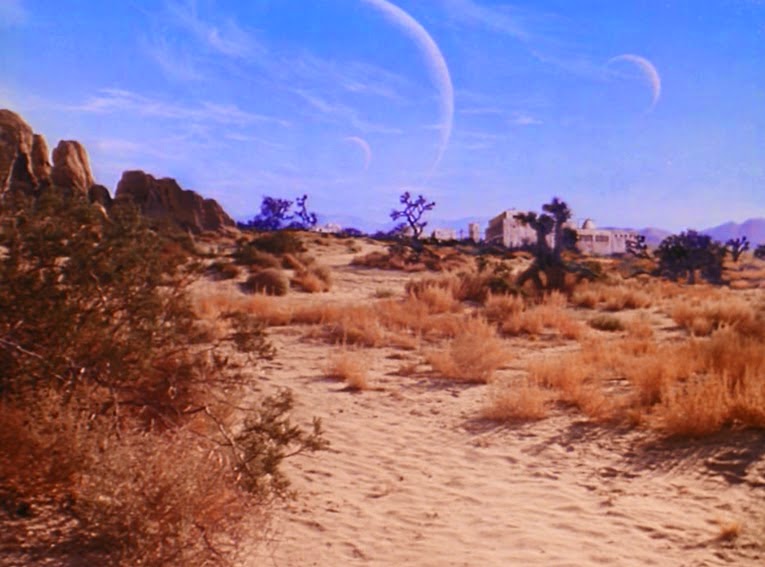 “Unchained Woman” is a fun episode of the series, bolstered by some nice location shooting in the desert, and some good special effects, such as the matte painting of the outpost called Station Post 7.

Several Battlestar Galactica (1978 – 1979) costumes get recycled there, but it hardly matters. And one final bonus of Bill Taylor's teleplay is a rare subplot involving Dr. Huer's back-story and friendship with Warwick. Huer (Tim O'Connor) is a truly interesting character, a principled leader who grew up in a time of famine and ascetisim, while Earth was climbing back on its feet.  Buck Rogers rarely took the time to focus on the character, but "Unchained Woman" reveals his true humanity, and his sense of decency, and loyalty.
at September 19, 2017