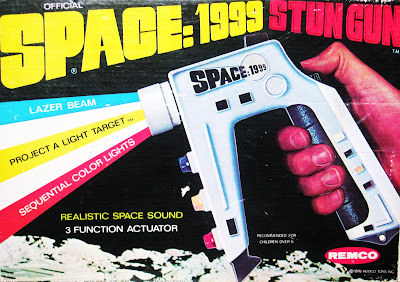 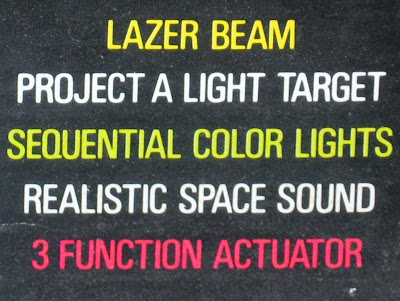 Featuring "realistic space sound" and "3 function actuator," this stun gun toy from Space:1999 (via Remco) was actually little more than a flashlight, I suppose you could say.  But when you de-pressed the trigger (located above the handle), you could "fire" a "lazer beam," "project a light target" on a wall (like an Eagle, for instance...) or enjoy the "sequential color lights."

If memory serves, Remco also produced a Star Trek phaser very much like this toy, with similar light and sound effects, and the same capability to project images on the wall.  I'm pretty sure I had that one too, though I no longer own one today.

Recommended for children over five, the Remco stun gun operated on 2 "C" batteries, and proved a critical part of  many interplanetary adventures...in my own backyard, of course.
at September 13, 2017