Near a small settlement of apes and human slaves far from Central City, Virdon (Ron Harper) loses the magnetic disc that can help the astronauts return home to their time period.

Unfortunately, the magnetic disc has been retrieved by the local ape prefect, Barlow (John Hoyt), who runs gladiator games in the nearby arena to keep the humans in his territory in line.

While Galen (Roddy McDowall) attempts to get the disc back surreptitiously, Burke (James Naughton) and Virdon are captured attempting to steal horses, and slated for combat in the arena.

Meanwhile, a human father, Tolar (William Smith) attempts to teach his son, Dalton (Marc Singer) to be a warrior in the games, even though the boy’s mother was a pacifist. 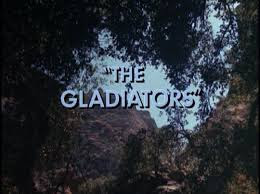 “The Gladiators,” by Art Wallace is a not particularly memorable or scintillating episode of Planet of the Apes (1974), except for the presence of a very young Marc Singer -- future star of V (1983) -- as a pacifist human. 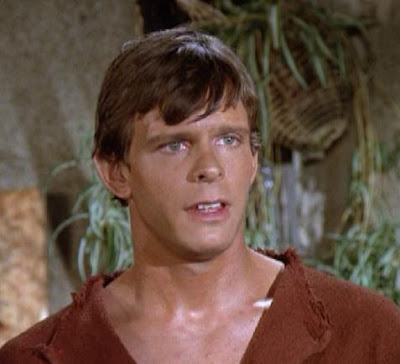 In terms of this 2017 retrospective of the TV series, I am looking in particular at not merely plot details, however, but the manner in which the episodes explore what I see as the key theme of the series: race relations on the planet of the apes. 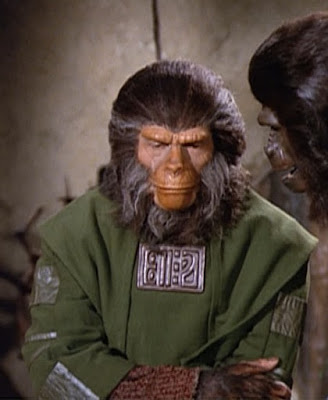 Here, Prefect Barlow’s attitude towards the human race is very patronizing, but in a sense that’s to be expected, given what humans did, historically, to destroy themselves (and the planet).

Barlow notes, for example (much like Zaius did in the 1968 motion picture) that man is “the only animal that makes war on himself.”  He believes that by giving the humans the blood they lust for in the arena, they can be controlled.  “They’re waiting for blood. It’s their nature. Human nature,” he says. 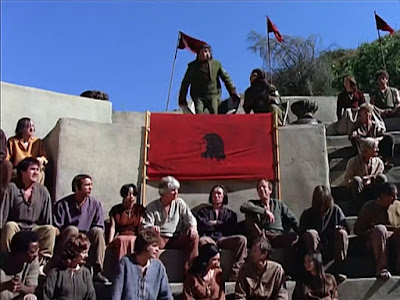 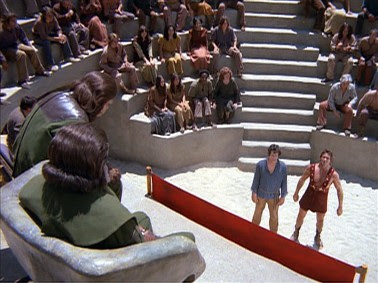 The episode provides a counter-balance for this prejudice in the person of Dalton. Here is a human who does not wish to fight, even though his father wishes him too.  Dalton is a reminder that Barlow subscribes to a stereotype, which might be defined as the failure to see a person as an individual.

Instead of seeing Dalton’s peaceful ways, and noting that they go against his perception of humans, Barlow hews to the stereotype for a long time.

And yet, Barlow does not seem like atotally  bad person, despite his reliance on stereotypes. For example, he is also patronizing to the gorillas, noting that they have “no understanding” of either “beauty or culture.”  So it is not as though Barlow is merely a racist towards human beings. He can clearly see that not all apes are wonderful people, either.  At one point, he even likens the gorillas to children.

Of course, this comment is trading in stereotypes too, isn’t it?

Eventually, Barlow comes to understand the error of his ways and seeks a better way to govern his settlement. Although one does not sense that humans will ever be equal there, at least he has acknowledged, as one character notes, that “killing should stop.”

Barlow, as a character, seems particularly real. He has beliefs that are wrong, and yet is not “evil,” as one might conclude of another character: Urko (Mark Lenard). As this episode starts, Urko basically orders his subordinate, Jason, to kill the astronauts on sight. He does not want to “get to know” his enemy, or learn more about where they hail from. He wants them eliminated. His mind is closed. By contrast, Barlow's mind is, at least a little, susceptible to reason.

Galen, as usual, represents someone of very open mind and very few biases. When he learns that his friends have lost the magnetic disc, he puts himself on the line to help him. In this way, he reveals his “humanity.”

Intriguingly, the first scene of the episode establishes that Central City is not the Ape City from the movies (which was located near New York City). From a wall-map in Urko’s office, it is clear that the city is located in California. Later in “The Gladiators,” Burke notes that the fugitives are now somewhere “North of San Francisco.”

This episode also features the series’ typical McGuffin: the magnetic disk.  It is ta plot device which gets the fugitives (Burke, Virdon, and Galen) into the story involving Tomar, Dalton, and Barlow.

Of course, as Burke rightly points out, there seems little way that the magnetic disk could actually prove useful to the astronauts. First they must locate a computer capable of reading it (and hence, reading their flight trajectory).  Then, they would have to construct a spaceship which could return them to orbit (and the correct trajectory).  I'm not certain how they think that could manufacture the necessary equipment.

Such an escape is the longest of long shots, but I suppose it is important that the astronauts on the series be viewed (by audiences) as purposeful and determined.They can’t just wander the countryside, and settle down. Instead, they have to be fighting to return to their world.

Finally, “The Gladiators” features a funny joke. Barlow is a collector of antiques from the distant past, and fancies himself an anthropologist/archaeologist of sorts. He proudly shows Galen a golf club, and mistakes it as some kind of ancient human weapon.