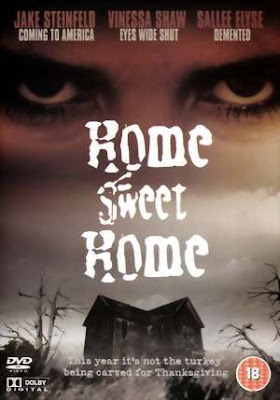 "A little craziness never hurt anyone..."
- Dialogue from Home Sweet Home (1980)
In honor of the approaching holiday, today I'm looking back at a really terrible horror film that I first encountered while writing Horror Films of the 1980s (2007).

Conveniently, it's both Thanksgiving-themed and a turkey.

Advertised with the ad-line "The Bradleys won't be leaving home. Ever," Home Sweet Home (1981) is the not-so-riveting story of a deranged serial killer and his holiday rampage.

Said serial killer is portrayed by Body by Jake's (1988) gleeful Jake Steinfeld. The enthusiastic exercise guru -- also known for his music label, "Don't Quit Music" -- plays this muscular madman as a cackling, bulging-eyed freak. This looney killer has the tattoo "home sweet home" emblazoned on his fist, and was incarcerated for eight years over the bludgeoning death of his parents.

In one of the film's first scenes, this hyperactive, super-fit killer takes PCP by injecting it into his tongue, guns his car engine rowdily, and then runs over a little old lady crossing the street.

Lots of maniacal, silent-movie-style, villlainous cackling over that. Unfortunately, Jake has no moustache to twirl.

Meanwhile, at a Southern California ranch, the unconventional Bradley family is preparing for a holiday that may or may not be Thanksgiving. Let's see: there's a turkey. There's a celebratory meal. There's a family gathering. And there are guests. But no one mentions Turkey Day by name. The VHS box does it for us.
Anyway -- for some reason -- the obnoxious Bradley son, charmingly named "Mistake," is dressed as a mime for the occasion. He's a practical joke-playing mime, no less. And did I mention, Mistake also dabbles in the electric guitar?

Unfortunately, the mime is one of the last characters to die in Home Sweet Home, meaning the audience must endure Mistake's lame antics for a very long time before the movie arrives at his fateful, and wholly-deserved electrocution.

The holiday meal with the Bradley family promises to be an unusual one too, not just because Mistake is a mime and because an uninvited serial killer is on his way, but because one of the invitees "won't drink anything," since "she hates to go to the bathroom." WTF? You know, I don't particularly like going to the bathroom either. I think I'll stop drinking too. I didn't realize it was that simple...

And did I mention that some crack cops are on the case, investigating the murders and pursuing the body-builder killer? The classy cops gawk at one character's overripe breasts after stopping her for speeding, and share this colloquy:
"Did you see that chick with the big bazooms?"

Since Home Sweet Home is incompetently shot, written and acted, one might hope that the violence Jake ultimately inflicts on the Bradley family would at least prove entertaining. But it isn't (well, except for the death of the mime, to be fair...). One character dies when she falls over and cracks her head against a rock. Can you really blame Ole Jack for that? Another character gets his head crushed under the hood of a car.

Home Sweet Home exhibits the familiar flaw of the worst slasher films, meaning that the killer is always positioned right where he should be in order to kill the one character who happens to be left alone at any given moment. You might accept that level of expertise from a Michael Myers or a Jason...but by Jake Steinfeld? I just can't ascribe supernatural abilities to this guy. Enthusiasm, gung-ho inspiration, yes. Boogeyman capabilities...no.

Email ThisBlogThis!Share to TwitterShare to FacebookShare to Pinterest
Labels: Horror Films of the 1980s, horror movies