Four Underrated Vampire Movies to Watch Instead of Twilight 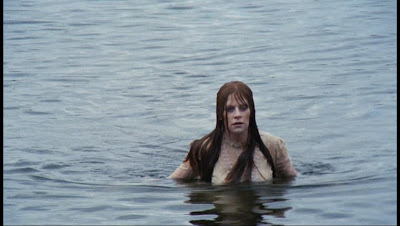 Do you have an insatiable appetite to watch a really good, really original, vampire flick? One that takes the familiar, tired concept of the long-lived bloodsucker and twists it to new, subversive ends? (And by that, I don't mean tween romance...).

If so, I humbly submit this list of four bizarre, ghoulish, and off-beat vampire flicks that are certainly worth a second look, especially for the horror connoisseur.

Again, I'm leaving out the obvious examples of well-known vampire movies here (Let the Right One In [2008], The Hunger [1983], Near Dark [1987]] in favor of more obscure, more oddball titles that carry the vampire myth in new and daring directions.


1. The Addiction (1996) : This incendiary film by Abel Ferrara connects the My Lai Massacre in Vietnam, the atrocities of the Holocaust and ethnic cleansing in Bosnia to vampirism and blood lust. "Our addiction is evil" declares grad student Kathleen Conklin (Lily Taylor) after vampire siren Anabelle Sciorra passes the appetite for hemoglobin onto her during a vicious attack on a New York street corner.
What follows this savage torch-passing is a cinematic meditation on philosophy, human nature and the face of evil. The film quotes Descartes, Jung, Sartre, Kierkegaard and William S. Burroughs. Lensed in stark black-and-white, The Addiction even features an extended cameo by Christopher Walken. He's a vegetarian vampire who quotes Naked Lunch and informs a vampiric Kathleen that "you learn, like the Tibetans, to survive on a little." This is advice she ultimately rejects, and there's a metaphor for self-actualization here; for finding a mentor figure, absorbing all of his or her knowledge, and then, in due time, utterly rejecting that which was given freely. Both a satire of modern academia and a commentary on human nature (we're all vampires...), The Addiction is one fascinating, thoughtful, and disturbing vampire flick.

2. The Wisdom of Crocodiles (1998). Jude Law portrays handsome but cold Steve Grlscz, an urbane, city-dwelling vampire, in this underrated gem. Steve's body is rapidly breaking down and he needs the blood of women to hold it together. But there's a catch: Grlscz needs the perfect love of those women too, which means he must romance them -- must make them fall in love with him -- and then kill them. "Love is what I feel; what I eat," he explains.
Human emotions, you see, are carried in the blood, according to Grlscz, and he needs that love as a primary ingredient in his feasts. Cold, spare, and unrelentingly wicked, The Wisdom of Crocodiles envisions Grlscz as a kind of evolutionary throwback. Human beings have three brains, he confides in one lover, a human brain -- which is built upon a mammal brain -- which in turn is built upon a reptilian brain. Grlscz, it seems, in his coldness and emotional emptiness, has much of the crocodile in him. The Wisdom of Crocodiles even exhibits a great metaphor about the ultimate boredom of immortality; discussing the "agony of holding on," and the "wonderful feeling of letting go" in connection with Grlscz's childhood plunge from a tree. Can a crocodile (or a vampire) experience real love, real connection? Or does a vampire only cry crocodile tears so as to lure his next meal? That's the question this movie raises.

3. Blood Couple (aka Ganja & Hess) (1973): This is an odd, inventive work that re-interprets vampirism in the context of the African-American community and experience. Written and directed by Bill Gunn, the story revolves around Dr. Hess Green (Duane Jones), a black scholar investigating the long-dead culture of Myrthia in Africa. After he is stabbed with an infected ceremonial dagger from the long-dead civilization, Green falls prey to the same plague of vampirism that corrupted and destroyed that advanced society.
Before long, the noble Green reluctantly begins feeding on the "lesser" members of American (black) society, including pimps, junkies and hookers. The movie is about race loyalty and betrayal; about the way the upper class feeds off the lower class, and more. Even debating the role of Christianity in the black community, Blood Couple defines vampirism as essentially addiction; on the feeding off of others.
Critic Harry Benshoff captured well the film's essence in his essay "Blaxploitation Horror Films: Generic Reappropriation or Reinscription," Cinema Journal, Volume 39, No. 2, Winter 2000, pages 43 - 45.: "At the heart of the film lies vampirism as a metaphor for capitalism and cultural imperialism, dramatizing in horror movie iconography how some human beings live off the blood, sweat, and toil of others."

4. Let's Scare Jessica to Death (1971): I've written before (at length...) -- here -- about this remarkable horror film from the disco decade. Let's Scare Jessica to Death depicts the travails of a woman named Jessica (Zohra Lampert). Only recently, she has recovered from a nervous breakdown. With her husband, Duncan (Barton Heyman) and a friend named Woody (Kevin O'Connor), Jessica relocates to a small town in Connecticut, a town haunted by the memory (and perhaps presence...) of a vampire woman named Abigail Bishop.


Directed by John Hancock, the film is beautifully photographed, and it captures hazy, dream-like images in a powerful way. One shot (of Jessica alone in a canoe by sunrise) calls up resonances of The Lady of Shallot. And the villainous Abigail -- a porcelain specter in diaphanous white gown -- is a contemporary Rappaccini's daughter who brings terror and death to anyone who falls under her spell.
The vampires of the film, other than Abigail, are all wrinkled old men and denizens of the town. At one point, the geriatric vampire brigade accosts Jessica in her bedroom -- a hungry mob -- and it's a freaky, disturbing moment. In Horror Films of the 1970s, I termed Let's Scare Jessica To Death a great example of "New England Gothic," and that's exactly what it is. There's an ancient evil, a town with a dark secret, a struggle with personal sanity ,and a coven of blood-thirsty, gnarled old vampires. The result is one of the most hypnotic, unsettling horror films of the decade.
at November 13, 2009