BOOK REVIEW: Cinema of the Psychic Realm: A Critical Survey 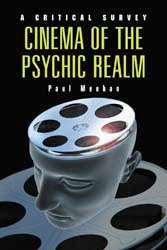 I have already read and admired two books on film from author and scholar Paul Meehan: Saucer Movies (Scarecrow Press, 1998) and Tech-Noir: The Fusion of Science Fiction and Film Noir (McFarland 2008). Tech-Noir, in particular, is one of the best film books I've encountered in the last several years.

Not long ago, I received a review copy of Meehan's latest effort from McFarland, 2009's Cinema of the Psychic Realm: A Critical Survey. Essentially, it's a guided tour across a century of productions that feature ESP, telekinesis, clairvoyance, and the like.

The book's first chapter, "A Brief History of the Paranormal in Fact and Fiction" sets the stage for the study, escorting readers from the Age of Antiquity (the Oracle at Delphi, "Psi in the Bible") to the Age of Aquarius. Meehan also includes crisp discussions of notable works of fiction that feature psychic themes, including Odd John (1935), Slan (1946) Theodore Sturgeon's More Than Human (1953), and Bester's The Demolished Man (1953).
The author's descriptions of these literary works proves illuminating because -- at least to a certain extent -- much of the modern Hollywood viewpoint on psychic power seems derived from one or all of them. This inaugural chapter ends with Meehan's notation that the paranormal's "shadow world of visions, mind-reading and prophecy would find its most popular expression in the medium of film."

In the following seven chapters, Meehan leaves no stone-unturned pursuing this thesis, excavating the fusion of the psychic world with art form of the film. He ponders silent films in Chapter Two "Early Paranormal Films," and "ESP in Drama, Comedy and Children's Films" in Chapter 3. He looks at the role of ESP in "Paranormal Crime and Melodrama" in Chapter Four. In the last half of the book, the author veers towards what is traditionally regarded as "genre" films, with a careful, thorough view of "The dark side of ESP," "Alien ESP," and even "Science Fiction Blockbusters."

I often tell anyone who will listen that the secret to penning a good reference book about film is not choice of topic; but organization of topic. Meehan understands this, and accordingly uses his premise to make connections that are inventive and rewarding. For instance, Star Wars (1977) and the franchise sequels/prequels have been reviewed approximately a million times in film books over the years, but Meehan thoroughly re-contextualizes the George Lucas film cycle in terms of the depiction of the psychic; in terms of the mystical "Force" that powers both the Jedi Knights and the Sith Lords.
Meehan notes the 1977 film's unexposed core theme: "the conflict between the intuitive, preternatural realm of the Force and the futuristic universe of technology and machines." Continuing, he writes "Darth Vader's seemingly counter-intuitive contention that the "technological terror" and overwhelming military might represented by the Death Star is vulnerable to the mystical workings of the Force proves to be correct." (page 145).
The same discussion notes how the Jedi represent an "atavistic return to the ancient shamanic traditions" of the past whereas Vader represents the "co-opting of these shamanic traditions by the machine world, his human identity having been subsumed" by mechanical life-extension techniques and devices. Another worthwhile insight about the Star Wars films arrives on page 161, where Meehan notes the Jedi Order's "hyper-masculinity," and how it takes over "what are traditionally thought of as aspects of feminine mysticism and magic" (a reliance on feelings and intuition, for instance...)

As you can detect by this example, the application of Meehan's organizing umbrella of the "psychic realm" provides new and interesting readings of many films you've watched a dozen times. And that's a great service, because the author makes you want to watch these movies all over again. In Cinema of the Psychic Realm, you'll find persuasive discussions about Minority Report, Dune and other films you've loved over the years.

If Cinema of The Psychic Realm exhibits any drawback worth noting it's that you want this compelling book to be...longer. The discussion is limited mostly to film, and you want Meehan to occasionally break-out to ancillary productions so he can keep making this valuable connections about the psychic realm. For instance, there's a valid argument to be made that psychic powers have found their most powerful expression not in film at all, but in film's cousin: television. From One Step Beyond (1959-1961) -- an anthology devoted entirely to the paranormal -- to programs such as Beyond Reality, Millennium, The X-Files, Medium, Ghost Whisperer, and Fringe, TV has become the dominant domain of the psychic realm on a near-weekly basis for the last two decades or so.

Of course, this book's topic -- as it states right there in the title for all to see -- is Cinema, not TV, so Meehan can't be faulted. Yet it would certainly be rewarding to see Meehan tackle Television of the Psychic Realm next; a necessary book-end to his thorough and valuable survey of the psychic in film.

Paul Meehan's Cinema of the Psychic Realm: A Critical Survey is currently available for purchase from McFarland here, and it's a book I can recommend to readers of this blog without reservation. And while you're at the McFarland site, pick up a copy of Tech-Noir too...
at November 15, 2009