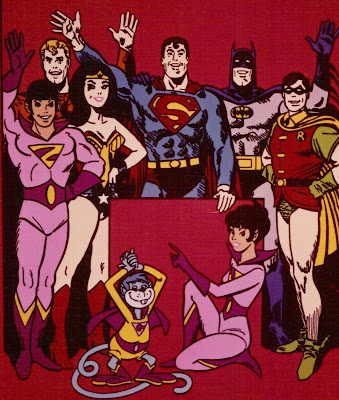 Without missing a beat, Joel then asked me if I've written about his favorite show yet: The All New Super Friends Hour (1977-1978), which he saw for the first time about three weeks ago. I realized I hadn't written about the classic cartoon series yet, and Joel asked me if I would do so.

The All-New Super Friends Hour aired from 1977 to 1978 on ABC television, and featured the adventures of the denizens of the Hall of Justice.

These DC Comics superheroes include Superman, Batman and Robin, Wonder Woman, Aquaman, the Wonder Twins (Zan and Jayna...) and their "space monkey" Gleek.

And week after week, these "Super Friends" battle the likes of outer mind-controlling space ants ("Coming of the Arthropods") and corporate conspiracies ("The Secret Four." They travel back and forward through time ("Planet of the Neanderthals") and destroy deadly weapons (like "meson energizers,") put out forest fires, expose impostors ("The Marsh Monsters") and lecture villains about the use of force.
Back in the days of The Super Friends, there was no cable television...and no secondary market for DVDs either, which meant that, essentially, come Saturday morning, children ages 3 to 13 had only three channels to choose from. Thus the programming had to be suitable for those ages...and homogenized. For superhero programming like The All-New Super Friends Hour, this meant very little "real" violence (punching, kicking, etc.) but lots of morally valuable conflicts and discussions about what it means to be a good person.

Each episode of The All-New Super Friends Hour is split into several short segments. The initial story usually highlights two of the Super Friends working in tandem to solve a problem. Often, there is a special guest star Super Friend in the mix too. For instance, Wonder Woman and Apache Chief worked together in "The Antidote," and Aquaman and Black Vulcan helped save a runaway ship in "The Whirlpool." Among the other guest heroes: Atom, Green Lantern, Hawkman, Hawkgirl, Black Vulcan, Rima the Jungle Girl and Joel's current obsession, Toshi Eto...Samurai.

A second segment is termed "Safety" and features an adult Super Friend offering children guidance about the perils of every day life. For instance, in one segment, Wonder Woman warns little kids about the danger of chewing on pen caps and Styrofoam cups. D'oh! Another entry sees the Paradise Island native praise a boy for carefully crossing the street. "I saw you from my invisible jet and had to stop by..."

Every episode of the All-New Super Friends Hour also features a morally valuable adventure of the Wonder Twins. Each tale commences with Zan and Jayna happily involved in some activity like volleyball or miniature golf when they receive a "teen trouble alert" via special wristwatches. Then, they leap to the rescue of misbehaving teens. Said rescue always entails the Wonder Twins using their shape shifting abilities. Jayna often morphs into a polar bear, an eagle or a camel, while Zan transforms into water, a lake, a ski-slope(!) and an ice sled. After the danger is resolved and the guilty, crest-fallen teens learn their lessons, these segments universally end with Gleek's comic shtick.

Among the Wonder Twin stories are titles such as "Hitchhiking," "Vandals," "Runaways," "Joy Ride," "Initiation," "Shark," "Tiger on the Loose" and even "Prejudice!" One story warns against the danger of "jumping to conclusions," which -- truth be told -- is a refresher we can all use. Joel in particular has fallen in love with the Wonder Twins, but he gets very upset by the misbehaving teens in the stories like "Hitchhikers," "Runaways" and "Vandals." He has also begun instructing me and his mother: "Don't Smoke!" (Neither of us smokes...).

Another segment on The All New Super Friends Hour pits the entire Hall of Justice team against some alien or earthbound evil. "Super Friends vs. Super Friends" lands our heroes in the undersea kingdom of Oceania, where they are forced to battle one another in a kind of underwater Roman Colosseum. "City in a Bottle" takes the Super Friends to a frozen planet to rescue the Wonder Twins and a miniaturized Mid City. "Invasion of the Earthors" pits the Hall of Justice Regulars against mole men at the center of the Earth.

These All New Super Friends episodes are truly relics of a different age...though wholly enjoyable on their own terms. For instance, Batman is not dark or angsty in the slightest in this incarnation. And Superman does not feel the pressure/isolation of his "otherness." The Flash is not a smart-alecky quipper either. The Aquaman you see here is old school too -- not the angry-looking, long-haired, hook-equipped revenger of recent vintage. Instead, all the Super Friends seem virtually interchangeable, save for their specific powers, costumes and devices. On that note, some of the Bat devices featured here are truly absurd. Kathryn and I got a good chuckle out of the "Bat-Lube," a utility belt item that is always handy to keep around, in a pinch, I guess...

Yet, I can't complain. The series is perfect for me as nostalgia, and perfect for Joel as straight-up superhero action-adventure. There's no real violence to attempt to explain away to an inquisitive toddler, and in just a few short weeks Joel has begun accurately using words such as "telepathy," "monolith," "invisible," origin," "toboggan" and "activate." He dressed up as Black Vulcan last week; and this morning has been a Wonder Twin with Kathryn, yelling "Wonder Twin Powers...Activate!" Just a few moments ago, Joel/Zan transformed into a drill and broke through one of his Daddy's bear hug squeezes...

If you didn't grow up with The Super Friends, or don't have a child, I can't imagine that this will be the version of the DC Legends you choose to enjoy, especially with the terrific JLA of this decade also available on DVD. But if you remember the disco decade, and if you have an enthusiastic child to share them with, the All New Super Friends Hour is really terrific fun. It's a perfect superhero/comic-book primer for Joel and a great memory for his Dad.