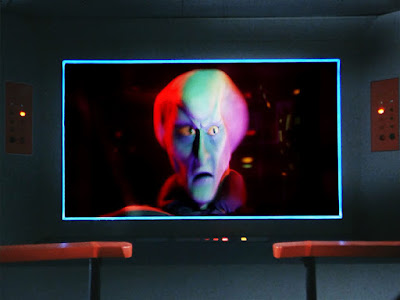 Steve Kindernay’s Top 20 Star Trek episodes
Choosing your top 20 Star Trek – The Original Series episodes is daunting, to say the least.  As you go through the list of the entire run of episodes, the choosing becomes even more harrowing, since there are so many classics or standouts which are worthy of any qualitative list.

I’ve chosen my top 20 based on the episodes I always return to -- those I watch most when I pull the blu rays off of the shelves.  There may be nostalgia involved, and the First Season figures prominently, since that is the time when the show was striving for and achieving a level of greatness which is palpable, and Gene Rodenberry’s influence is keenly felt.

I did not include “City on the Edge of Forever” because, although it is magnificent, I felt it would be well-represented by others, and it did not strike a chord with me the way that other episodes did.  That being said, here are my selections for the 20 best episodes of Star Trek.

20) “All Our Yesterdays” - Profound and poetic.  Zarabeth’s fate and the mystery of her story still haunt the viewer long after the conclusion.  The idea that time waits for none of us, and death is a part of life is woven throughout. Mr. Atoz’s name alone is proof that this episode is operating at a higher level.

19) “The Paradise Syndrome” - Always makes a grown man cry, that grown man being me.  Miramanee’s story ranks right up there with Juliet, Isolde, Eurydice and others as a tragic loss born out of unconditional love.  So amazing that the scope of this episode covers months, a daring thing for any series to attempt at the time.

18) “The Tholian Web” – A tour de force of special effects, atmosphere, and the idea that space holds many mysteries and life forms which are totally alien and unknowable.

17) “Day of the Dove” – Action-packed, the closest thing we ever got to a war with the Klingons.  Michael Ansara excels.  The idea of a life form that feeds on hatred has been copied ad infinitum, and rarely done better than here.

16) “Journey to Babel” – This episode has so many layers, quiet moments, action and suspense, and real jeopardy for our cast.  Mark Lenard and Jane Wyatt – is there really any more to say?

15) “Amok Time” – Seeing Spock’s home world for the first time was incredible.  A perfect start to the Second Season.  Action music so iconic, Eddie Murphy would add it to his stand-up act years later.  “In a pig’s eye,” indeed!

14) “The Doomsday Machine” – A classic science fiction trope made into a classic Star Trek episode.  There aren’t enough superlatives for William Windom’s performance.  Another episode which really makes you question if the Enterprise can escape with its hull intact.

13) “Mirror, Mirror” – Introduced the concept of the Multiverse to an entire generation of viewers.  “Mirror, Mirror” is a stunning achievement.  Something of a cautionary tale – a glimpse of what might happen if we allow darkness to overtake us, if we become the Empire.  This drives home the morality and higher aspirations of Kirk and the Federation.

12) “Metamorphosis” – A beautiful love story, well-told.  Wonderful music and performances throughout.  Poignant and powerful, yet so simple and straightforward.  A testament to the endurance of all forms of love.

11) “The Menagerie” – One of the most wonderful aspects of this two-parter is the revelation that the Star Trek universe has a history, and we get to see it and marvel at it. It was genius to utilize the footage of the original pilot as a cost-saving measure; however, if you have ever seen “The Cage,” the ending of “The Menagerie” is far more satisfying and proper.  It’s almost magical that this footage was used to craft a story about the chances we are willing to take for friendship and love.

10) “The Devil in the Dark” – Pure Star Trek; represents everything that the show was about.  Who doesn’t love the Horta?  Who else but Spock could talk to it?  Who but McCoy could heal it?  Who but Kirk could stare down a mob of angry miners?  To think that this episode was written for a costume which Janos Prohaska demonstrated to Gene L. Coon speaks volumes about a series that was firing on all cylinders.

9) “What Are Little Girls Made Of?” – There is so much more going on beneath the surface of this episode’s amazing visuals.  This is an existential rumination on what it means to be human.  Our actions, our words, our souls make us who we are, but if we take away our bodies and substitute something else, what are we?  Kirk’s last line is a gut punch.  Raw, courageous, and deep.

8) “Errand of Mercy” – Noteworthy for the first appearance of the Klingons, “Errand of Mercy” speaks to our need to wage war, to overcome our most base instincts, to fight for what we believe is right, only to discover that we’ve got a long way to go.  I’d also submit that, were it not for John Colicos, the Klingons would not have the longevity they have today.  He breathed life into an entire species.

7) “Balance of Terror” – Food for thought:  We, the viewers, see the Romulans before any human does, even before the events of this episode.  This is a fully realized story of a war fought with an invisible enemy which has attained the literal power of invisibility, and our attempts to fight that enemy, while overcoming our own internal enemies – bigotry, doubt, sadness.  Mark Lenard is terrific.

6) “Arena” – This is the episode which I feel would be the most appealing to a wider, movie-sized audience to represent Star Trek.  The ideas herein are literate and thoughtful, yet the action never relents and the suspense is palpable.  The Gorn should have been comical, but it is realized so well that we don’t doubt its stature as an alien race.  The Metrons, like the Organians, are something we don’t see in science fiction anymore – a higher, almost godlike intelligence, to which we aspire, but whose superiority reminds us that our humanity is our greatest asset.  Top-tier Trek.

5) “Mudd’s Women” – There is no logical reason why “Mudd’s Women” is in my top five.  I simply love it for what it is:  colorful to the point of painterly, entertaining as hell, a frontier story set in the future.  Spock’s “Vulcanian” emotions are delightful.  The music is some of the best in the series.  I have fond memories of watching this episode with my friend.  It was so offbeat, and we loved it then and we love it now.  “Don’t hate me because I’m beautiful” said the woman who just took the Venus drug.  Don’t hate me because I love “Mudd’s Women!”

4) “Where No Man Has Gone Before” – Proof positive that, without Kirk, there is no Star Trek as we know it today.  This is Kirk’s story, and his struggle to cope with forces beyond his control that have taken his best friend.  The Delta Vega matte painting is one of my favorites; so evocative of a faraway world on which humans have made their presence known.

3) “Charlie X” – Great lower decks action; great casting of Robert Walker, Jr.; great story with a twist ending that borders on deus ex machina but isn’t because it’s the only resolution which feels right.  Moreover, the fact that we feel sympathy for Charlie after his actions is a reminder that we’re still humans and not Thasians.  We love, we forgive.  We cannot survive without each other.

2) “The Naked Time” – A perfect way to introduce our new characters on our new favorite science fiction show: a disease which forces them to bare their souls and vulnerabilities.  Add in a no-win scenario (years before the Kobayashi Maru) and a unique solution which shows why the crew of the Enterprise is to be admired, and you have a great example of why Star Trek became a phenomenon with all the cool kids.
1) “The Corbomite Maneuver” – The penultimate, perfect episode of Star Trek.  Hits all the right notes, and remains the best example to show your friends why you watch this show.  “There's no such thing as the unknown - only things temporarily hidden, temporarily not understood.”  Kirk’s line represents the entire philosophy of the Federation, of Roddenberry, and of Star Trek itself.  The denouement of this episode is delightful, worth every ounce of the wait, and wraps up one of the finest hours of television ever broadcast.
at September 06, 2017