A woman named Carola de Canterville (Kathy Garver) lives in the mansion in the graveyard, and is haunted, routinely by the clumsy and cowardly ghost of Simon de Canterville (Ted Knight). This spirit is cursed to remain in the castle for all eternity, or until he commits a brave act.

An evil gangster, Mr. C. (Len Lesser) pretends to be Simon, the Ghost of Canterville, to run Carole out of her house and find the priceless Canterville Diamond.

Fortunately, the Ghost Busters are assigned to help Carole uncover the truth of the haunting.  And as a happy but totally unintended side-effect of their involvement, Simon’s curse is broken. 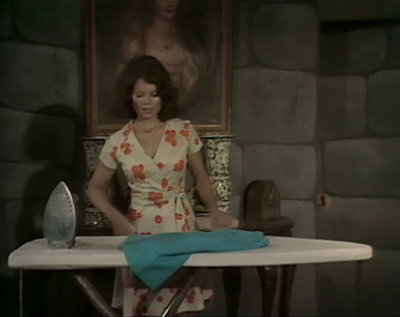 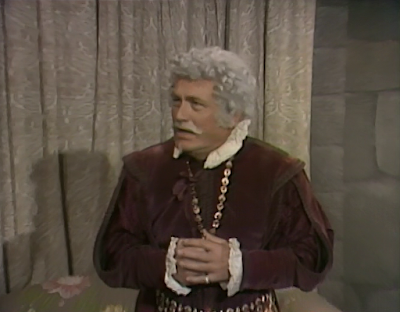 This week on The Ghost Busters (1975), we meet Carola Canterville, and finds that she lives in the castle we’ve seen occupied by various spooks in every other episode of the series thus far. We see her ironing, and going about her (domestic) business, when Mr. C. begins “haunting” her.  We also learn that a spirit  -- Simon -- has dwelt in the castle for centuries, even though he too has not been seen in previous episodes.

This castle gets a lot of action. And also, each episode of the series apparently occurs in its own parallel universe.  These are the facts we can draw from events this week.

What distinguishes this episode from the others, largely, is the presence of Ted Knight as the cowardly spirit.

At this point, The Mary Tyler Moore Show (1970-1977) was still on the air, and the actor was at the height of his popularity as a scene-stealing second banana. It’s a bit of a surprise to see him on this series, which is so cheaply produced, and a haven, mostly, for those on the way down the ladder to D-celebrity status.

Otherwise, this episode includes another corridor gag, and Tracy shadows by a mobile suit of armor (really Mr. C.).  Again, this sequence could be a gag right out of Scooby Doo, cementing the idea that this series is a cartoon come to live action. 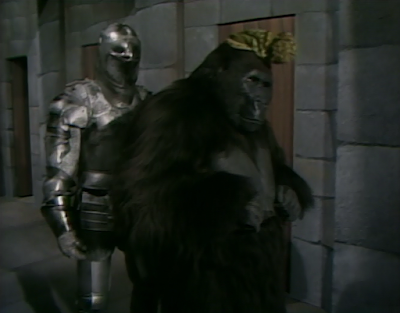 This episode also features such antique gags as the painting with moving eyes, which goes back as far as the films of Abbott and Costello, and likely further.