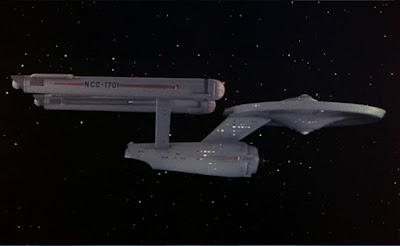 It was the 1960s and that meant, in terms of spaceships -- rocket ship fins and flying saucers for everyone!

Those two concepts (rockets and saucers) began to fall out of favor as the decade ended, thanks in large part to 2001: A Space Odyssey (1968), which adopted a more utilitarian-seeming aesthetic.

This was also the era that first introduced the starship Enterprise, a ship whose design has remained largely the same despite letters (A, B, C, D, E, NX-1) signifying different models.

How many do you recognize?

Email ThisBlogThis!Share to TwitterShare to FacebookShare to Pinterest
Labels: spaceships of