In “The Trojan Horse,” Dragos (Sid Haig) believes that his plot to destroy Space Academy in a galactic typhoon has succeeded.

While Dr. Parsafoot (Charlie Dell) repairs Peepo, Jason (Craig Littler) decides it is time to take on Dragos aboard his dragon ship.

His plan is to steal Dragos’ medallion and destroy it, an act which will free all of his enslaved minions.

But first, he and Nicole (Susan O’Hanlon) and Jason must get aboard the Dragon ship and make their move.

Jason remembers the story of the Trojan Horse, and finds a piece of debris from the typhoon that can support life.  He knows Dragos, believing it to be debris from the academy, will not be able to resist bringing it aboard. He and Nicole hide aboard it.

The plan appears to succeed, with Jason even going so far as to signal Space Academy regarding his success and making plans for a rendezvous.

But Dragos has one last trick up his sleeve! 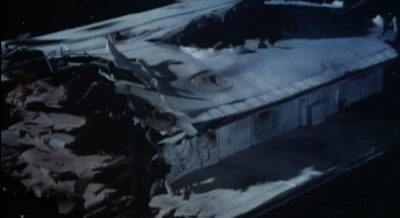 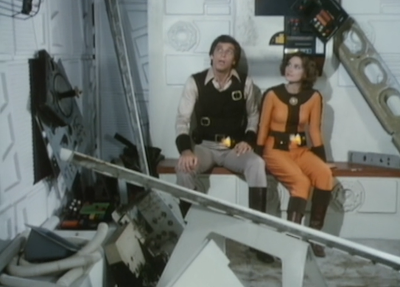 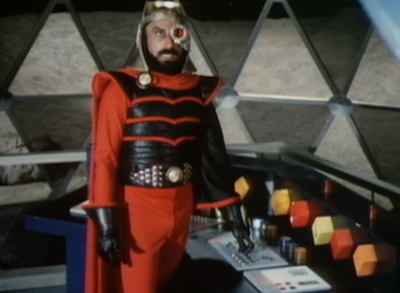 We’re almost to the end of Jason of Star Command’s (1978-1980) serial-like first season, and frankly it’s about time.

The overall story has been so stretched out, by this point, that it no longer has much in terms of momentum or pace.  Overall, the season has been a series of captures, rescues and escapes. And through it all, Sid Haig (as Dragos) cackles maniacally.

That about sums it up.

In this story, “The Trojan Horse,” Dragos hatches his final strategy (this season, anyway…) and tricks Jason into leading his friends into a deadly ambush.

Jason, of course, falls for it, and all looks lost.

Next week, the season reaches its denouement with “The Victory of Star Command.”
at January 09, 2016